Home›Movie Reviews›All the Money in the World - A Fantastic, Dramatic True Story Comes to Life!

All the Money in the World - A Fantastic, Dramatic True Story Comes to Life!

All the Money in the World is directed by Ridley Scott, and stars Michelle Williams, Christopher Plummer, Mark Wahlberg, and Charlie Plummer. The film is based on John Pearson’s book, Painfully Rich: The Outrageous Fortunes and Misfortunes of the Heirs of J. Paul Getty, first published in 1995.

In 1973, the grandchild of billionaire J. Paul Getty is kidnapped and held for ransom. The boy’s mother, Gail Harris, appeals to her father-in-law, trying to get the money to pay the ransom, but he refuses to have anything to do with the process, not wanting to lose any of his fortune. Harris teams up with Fletcher Chase, Getty’s manager of affairs, in an effort to have her son brought back safely.

Ridley Scott has been active as a professional director for four decades. Now aged 80, the man shows no signs of backing down from what he does best. This is the man who directed classics like Alien and Blade Runner so long ago, yet continues to provide solid contemporary work in the form of films like Gladiator and The Martian. All the Money in the World, despite its somewhat troubled production history with the firing of original star Kevin Spacey, comes together nicely, and while it does suffer from some pacing issues and an overlong run time, features stellar performances and superb drama from its all-star cast. 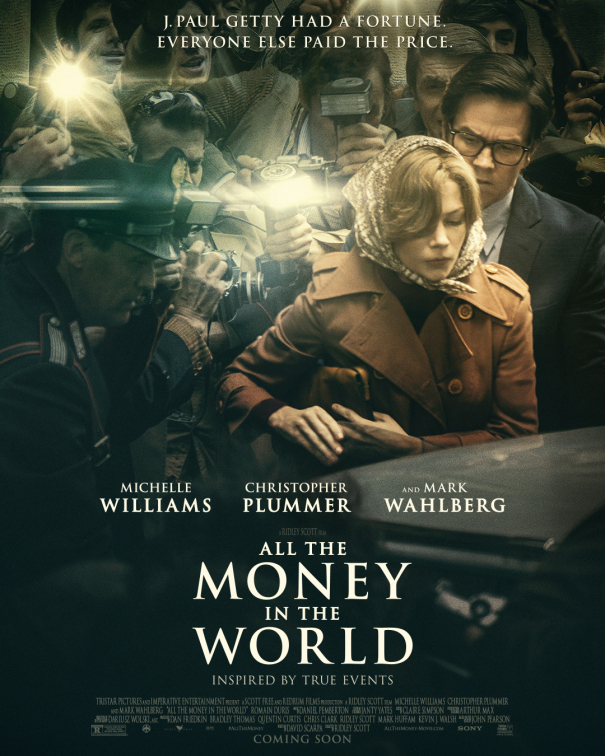 Christopher Plummer is pushing 90 years of age, yet here, gives one of the performances of his career as the iconic J. Paul Getty. This is a man who amassed the largest fortune in world history, yet remained so cheap and greedy that he installed a pay phone in his home for guests. He refuses to pay a relatively small portion of his fortune for the safe return of his grandson, yet has no problem making larger and more substantial investments in rare artwork and his own estates. This creates strained relationships between him and the people supposedly closest to him, and his chemistry with the other actors in the film makes for superb performances all around. Plummer is absolutely detestable in this role, yet plays it so well. His character is not in any way glorified, which only adds to the authenticity and effectiveness of the portrayal. It also helps that he is not in every single scene of the film; we see him just the right amount.

The supporting performances fare nearly as well, including Michelle Williams as Gail, the concerned mother of the kidnapped boy, and Mark Wahlberg as Getty’s business manager, with whom Williams forges an uneasy partnership. These two get some fantastic scenes together, and I give Scott and the film crew credit for not trying to forge a fabricated romantic subplot between the two of them. Even many of the terrorists/kidnappers seen in the film feel like fleshed-out, three-dimensional characters.

The only real performance in the film that does not work is that of John Paul Getty III in his younger years, which feels wooden, and like the young actor is reading his lines from cue cards, but fortunately, there aren’t too many of these scenes in the film, and Charlie Plummer (no relation to star Christopher) who portrays him as a teen fares much better. The film also could have used more time with Gail's ex-husband/Getty's son; he is supposedly a drug addict and womanizer, but this is only loosely hinted at.

The overall narrative of the film is not difficult to follow, which is a plus; the basic plot is easy enough to decipher, but quickly becomes engrossing and intriguing, with some unexpected plot twists along the way. If there is one weakness in the otherwise superb film, it is the pacing; with a run time of over 130 minutes and a slow-moving midsection, it is clear this film could have done without about 20 minutes worth of editing for pacing purposes, with no loss of effectiveness.

All the Money in the World is a fantastic cinematic experience behind one of the most interesting true kidnapping cases of the twentieth century. While the historical accuracy of some elements of the film may be called into question (as is often the case with “based on a true story” films), there is no denying that Ridley Scott has assembled an all-star cast, and gotten fantastic performances from them. There are a few faults in the final movie, namely the sluggish pacing in a few spots and an overlong run time, but everything flows together surprisingly well given the hurried casting and filming of Plummer. Cast and crew are at their finest here, and the end result fares surprisingly well, worthy of a recommendation.

DISCLAIMER: All image in this review are the property of their respective copyright holders, including (but not limited to) Sony Pictures Studios. For promotional use only. All rights reserved.

Beside Bowie - The Mick Ronson Story ...