Home›Movie Reviews›Gandarrapiddo: The Revenger Squad Has a Great Premise, But Terrible Execution....

Gandarrapiddo: The Revenger Squad Has a Great Premise, But Terrible Execution....

Gandarrapiddo: The Revenger Squad (hereafter simply referred to as “Revenger Squad”) is directed by Joyce Bernal. The film stars Vice Ganda, Daniel Padilla, and Pia Wurtzbach. The film is in the Filipino language, and subtitled in English for American exhibitions.

Years ago, a group of superheroes known as the Revenger Squad waged a battle against deadly villains. Emy/Gandarra, the leader of the group, opts to raise Chino, the innocent child of his deceased arch-nemesis, acting as an older sibling figure. Emy is stricken with amnesia following the battle, and years later, with his 21st birthday approaching, Chino becomes the hero Rappido, discovering his powers of speed. But in the shadows, Emy’s estranged sister is plotting to free the ultimate evil, preparing to unleash a devastating plot, and to reveal the truth of Chino’s parentage to him.

The concept behind Revenger Squad is brilliant; an off-the-wall superhero comedy. There are movies that have pulled this off brilliantly; Deadpool comes to mind. On the surface, a movie like this had all the ingredients necessary to make the perfect hero spoof. The hilarious Vice Ganda as a cross-dressing hero in a costume it looked like he swiped from Sailor Moon’s wardrobe. The attractive and charismatic Daniel Padilla as a hero coming of age. A beautiful villainess in the form of Pia Wurtzbach.

So, what the hell went wrong?

Revenger Squad features terrible writing, plot holes, low-budget costumes that look like something a child made, weak CGI work, and Padilla’s character basically being a rip-off of Quicksilver from the X-Men film series, right down to the film’s best sequence (if you can call it that) being a carbon copy of his best moment from the X-Men movies. Many of the scenes in the film feel like they belong in a different movie altogether, and several tertiary characters and elements never get property developed or fleshed out. 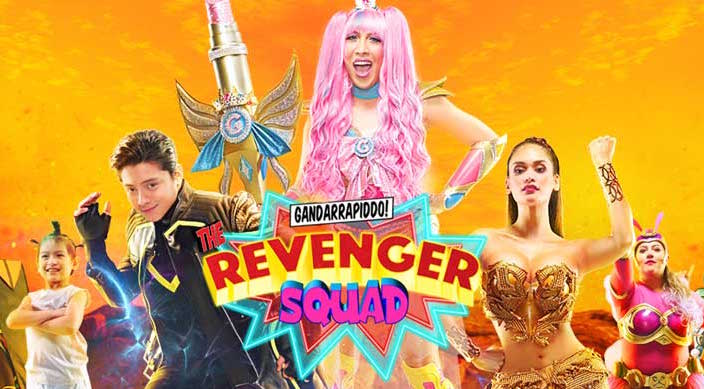 Horrible writing is just one of the problems with Revenger Squad. Characters need to restore another character’s amnesia (a plot element unto itself that has been overdone in the movies) and decide to do so by whacking the amnesiac over the head, which works…. Even though they were whacking the same character in the head repeatedly in the previous scene! The plot of a villain being sealed away and having to be freed is nothing new, and the movie doesn’t even bother putting a creative spin on it. Many of the dialogue exchanges not pertinent to the main plot of the movie don’t develop anything, or really even seem to have anything to do with the story. A sequence with a group of beautiful people (including Wurtzbach’s character) and ugly people (including Ganda) repeatedly insult each other, speaking in unison, and it is marginally funny, but does nothing to advance the movie, and doesn’t belong here. It does not help that the other members of the Revenger Squad are one-dimensional characters that get no development whatsoever; they are only used for action sequences and cheap laughs. Even the attempts at fourth wall breaks never quite work. It is pretty sad when the best and most emotional sequence in a superhero comedy is a dramatic monologue delivered by a child.

The CGI work in the film is atrocious; I am assuming the majority of the budget went into designing the Gandarra costume. Effects throughout look cheap and unconvincing. As such, the battles never quite have the effect they should have on the audience. Outfits for the other members of the Revenger Squad look laughably bad, like they are Halloween costumes that were made by a child.

Daniel Padilla is one of the best things this film has going for it…. But his character’s costume and power is a complete rip-off of Quicksilver from the X-Men, right down to a slow-mo sequence that feels 100% plagiarized from the X-Men movies. Would it have killed the writers to come up with something a little more original?

Vice Ganda, Daniel Padilla, and Pia Wurtzbach are all entertaining, charismatic faces in this film, but they cannot rise above terrible writing, a paper-thin cliched plot, an obvious low budget, horrible special effects, and countless other flaws that weigh the film down. The movie has its moments, largely due to the trio of main stars, but it simply is not enough to merit a recommendation.

The film is not rated by the MPAA, but my recommended rating is PG-13 for stylized action violence and mild thematic elements.

DISCLAIMER: All images in this review are the copyright of their respective owners, including (but not limited to) Star Cinema and ABS-CBN. For promotional use only. All rights reserved.

I, Tonya - Heartbreaking, Hilarious, and an ...