12 Strong: American Soldiers Strike Back…. But Does the Movie Offer Anything New?

Following the terrorist attacks on the Twin Towers on September 11, 2001, Captain Mitch Nelson, a military man who has just taken a desk job so that he may be closer to his family, appeals to his superior officers to get back into the field, so that he may go out and fight the terrorists in the Middle East. Heading to the other end of the world with his fellow soldiers, he and his team must forge an alliance with local rebels that are already waging a war of their own against the Taliban.

12 Strong is the latest in a long line of films chronicling the aftermath of the 9/11 attacks and the subsequent wars and battles. The film is well cast and features gritty, brutally realistic violence that paints a picture of the ugliness in the Middle East and the conflicts that have followed, but suffers from an overlong run time, and ultimately devolving into a movie that is essentially prolonged scenes of people shooting at one another, with little in the way of new revelations or insights about these events. 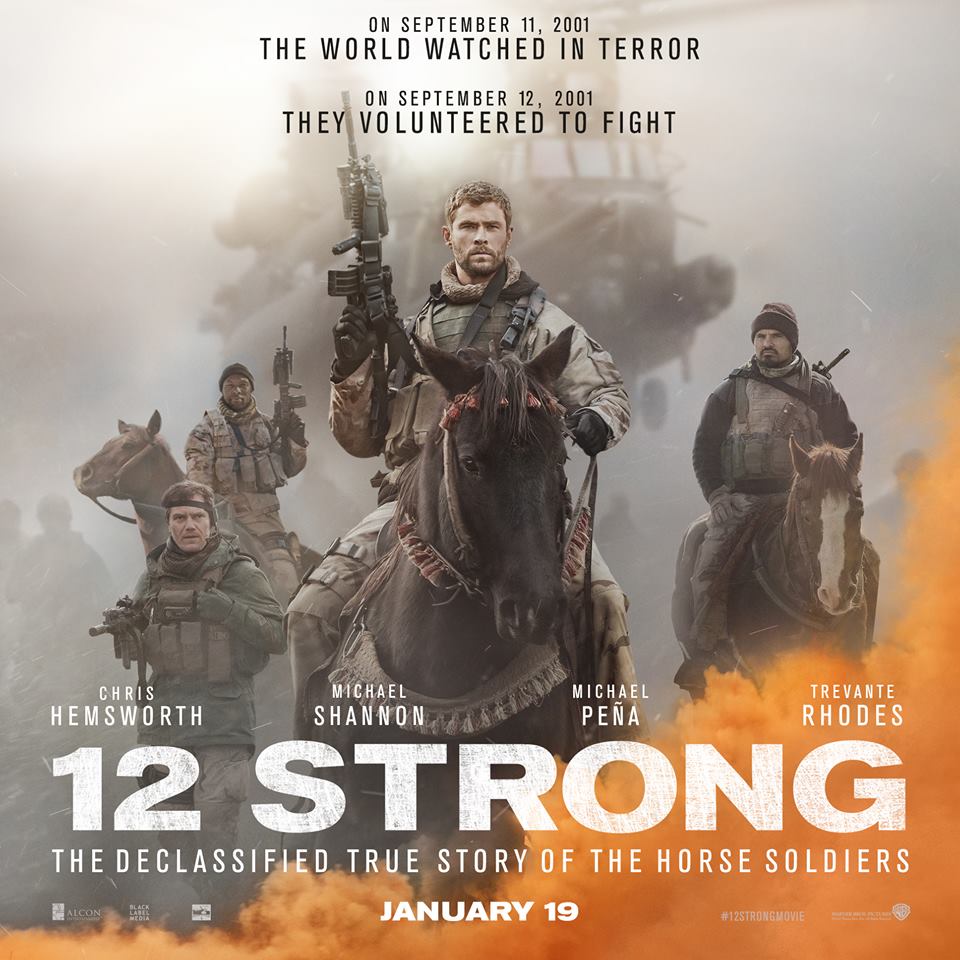 Despite my other issues with the film, the casting is fantastic. Chris Hemsworth fares well as Captain Mitch Nelson, who becomes a team leader, and one of the first American men to wage war against the Taliban following 9/11. He has great chemistry with his fellow soldiers, a true standout being Michael Pena, who gets off some of the better comedic moments and one-liners of the film. Navid Negahban fares equally well as a Middle Eastern warrior our heroes must ally with, and the contrast between the backgrounds of the Americans and Middle Easterners does make for some interesting moments, and arguably the most compelling and deep element the film has going for it.

The war violence in the film is what gets the movie its R rating, and it is definitely not a film for squeamish audiences. One must give the film credit for not shying away from the ugliness of war in its battle sequences. Say what you will, 12 Strong brings some powerful, realistic war scenes to the big screen, which will leave an impression.

Unfortunately, by this point, moviegoers are bound to be experiencing “battle fatigue” due to the recent oversaturation of war movies. It seems like every year, more and more pictures are cranked out by the studios based on 9/11 and/or its aftermath. 12 Strong has the word “Declassified” in its subtitle, but someone expecting to come in here for shocking revelations and truths about the aftermath of 9/11 and the soldiers fighting back are going to find little here they did not already know, as the movie opts for an “action first” approach, and even the soldiers’ families even end up feeling like afterthoughts and tertiary characters. In fact, the worded epilogue at the end of the movie reveals far more information of substance than 130 minutes of dragged-out movie does.

12 Strong promises its audience a revelatory story about the first American soldiers to fight back following the 9/11 attacks, but it quickly is reduced into a movie that is over two hours mostly comprised of people shooting at each other, linked together by a minimal narrative and nothing too surprising. It does, however, include a solid cast and strong execution in its battlefield scenes. It is not a bad film, but brings nothing new or unexpected to the table, and with the oversaturation of movies about 9/11 and the wars that have followed for America, it is difficult to give it anything more than a “rent it” recommendation.

DISCLAIMER: Images in this review are the property of their respective copyright holders, including Warner Bros. Pictures. For promotional use only. All rights reserved.