Los Angeles Detective Nick O’Brien is the head of a group of rogue detectives that go to any means necessary to accomplish and achieve their goals. When a shootout occurs with a gang of robbers stealing nothing but an empty armored truck, his team sets a plan into motion to find those guilty. Abducting Donnie, an outsider that the gang has recruited to be their driver, O’Brien and company learn about their schemes. But the gang, fronted by ex-Marine Ray Merrimen, is setting an elaborate plot into motion that entails a robbery on an impenetrable Federal Reserve building.

Den of Thieves has a fantastic cast, with great performances coming from Gerard Butler and O’Shea Jackson Jr., with the supporting cast doing a solid enough job. There are gritty and violent shootouts and action scenes teamed with an elaborate plot, but it cannot hide the fact that the movie, which has been artificially dragged out to an unbearable 140 minutes, only has about 90 minutes worth of content, and far too many unnecessary and repetitive scenes, inconsistent tone, unneeded plot twists, and subplots that go absolutely nowhere. 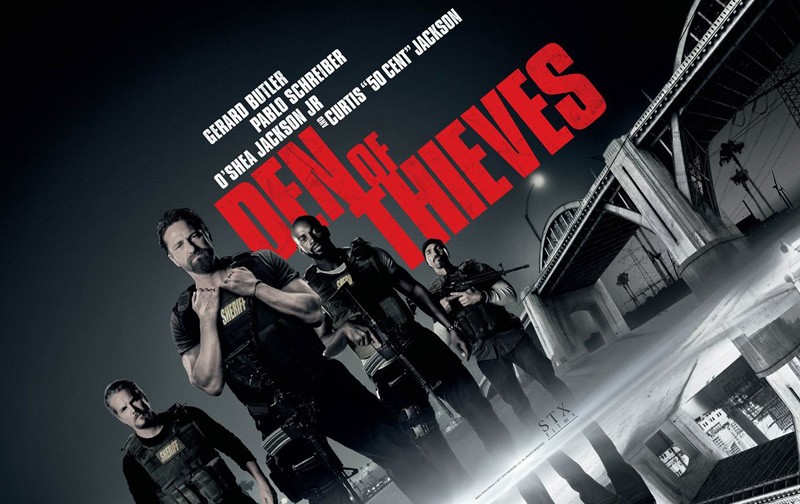 For positives, the casting is generally solid. Gerard Butler is fantastic as Nick O’Brien, who resorts to any means necessary to accomplish his goals, including taking down gangsters and robbers. The other real standout in the cast is O’Shea Jackson Jr. (son of legendary rapper Ice Cube, who had previously portrayed his father in Straight Outta Compton) as Donnie, who brings plenty to the table, including much of the comic relief. While my overall opinion of the movie is not the best, I would gladly see a spin-off featuring Donnie if one were produced (the film’s end moments imply such a thing is certainly possible). And while attempts at characterization are scattershot, I do give the filmmakers credit for trying to somewhat humanize and flesh out characters on both ends of the spectrum. Ultimately, we end up with likable and unlikable characters on both sides

The action/shootout sequences are infrequent, but gritty and violent when they do appear. Such scenes usually bring a welcome realism to the table, but at times, these scenes do feel dragged out, and it can be difficult to tell who is who during the most action packed of moments. A shootout near the end of the film should have a suspenseful, dramatic feel to it, but feels so dragged out with a character taking time to die that it ultimately ends up feeling like that scene in the second Austin Powers film where a woman somehow survives a multi-story fall and being bombarded with gunfire.

The biggest issue with the movie is pacing. Very few movies justify a 140 minute length, and this is certainly not one of them, especially considering it could have been 30-40 minutes shorter. One of the biggest culprits here is a subplot involving O’Brien’s wife and daughters, including his wife taking the kids and divorcing him. After the first half of the movie, said subplot is literally NEVER MENTIONED AGAIN. This could have been given the axe, and moviegoers wouldn’t have been able to tell the difference. Some scenes and side stories go nowhere at all. Likewise, a scene of 50 Cent’s character and friends intimidating his daughter’s prom date borderlines on camp, and fails to give him any additional humanity. The movie even drags on after its climax and tries to shoe horn in some plot twists, but this ultimately doesn’t change my views on the film, which loses its momentum on more than one occasion, and feels artificially lengthened.

The tone throughout the movie is inconsistent as well, with some scenes being brutal and violent (I would say the film certainly earns its R rating) and others being far too comical and silly, including the antics of a drunken O’Brien, be it in the home of his ex-wife’s new beau, or in a hibachi table restaurant where Donnie is dining with gang members. A little bit of comic relief in a movie is a good thing (one of the reasons I actually quite liked the Donnie character) but it goes overboard too many times.

Den of Thieves has a good cast and some great sequences, but it drags along at a snail’s pace with unnecessary subplots that go nowhere, inconsistent tone, and an overall sloppy execution that does not justify the overlong run time. Rent it when it gets a home release.

DISCLAIMER: Images seen in this review are the property of their respective copyright holders, including (but not limited to) STX Films. For promotional purposes only. All rights reserved.