As a child, Albert was ambitious and optimistic, writing stories that impressed his best friend Petie. But when Petie died in an accident in the mine where they played as children, he lost his motivation, growing into a reclusive man, estranged from his family, spending all of his time drinking and shut in his bookstore in the middle of nowhere. His daughter Liv and a doctor that is a family friend check in on him, but become convinced that he needs help amidst his ramblings that a character from a story he wrote as a child has come into the store to get a book he needs in order to destroy the world. Has Albert truly gone crazy in seclusion, or is what he is saying about the man who has entered his store true?

Unwritten is a mess, but it’s a fun mess. Filmed primarily in Las Vegas’ own Amber Unicorn bookstore, the film has an interesting premise and a great cast of actors you can tell are having fun with the material. There are some cluttered camera close-ups, unnecessary tertiary scenes/characters, and a few plot elements that make little sense/lack explanation, but these issues and a limited budget have not stopped the cast and crew from creating something that is enjoyable enough to outweigh its shortcomings throughout a run time of just over 80 minutes. 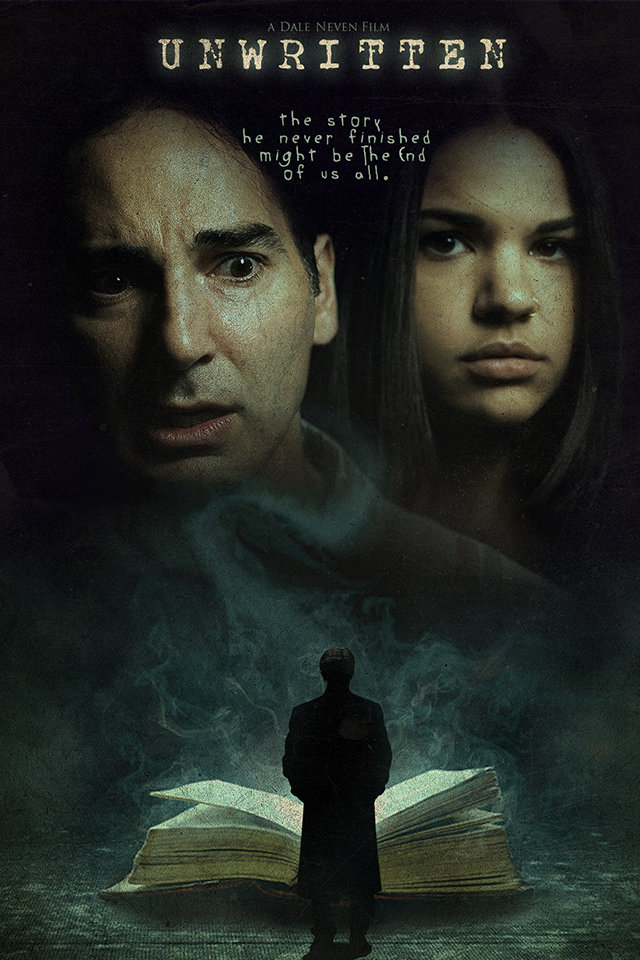 Probably the best thing I can say about Unwritten is that the principal actors are a lot of fun to watch; they are what make this movie worthwhile. Gabriel Burrafato is fantastic as leading man Albert, a man who has grown estranged and reclusive following his divorce and the death of his late wife, and now drinks all day and literally never goes outside the bookstore. While at first he seems to have given up on the world and doesn’t seem sympathetic, the story’s ultimate resolution should win over audiences. In flashbacks, Albert is played by Abraham Rodriguez, who manages to flesh out the character.

However, the true standout in the cast is Brittany Hoza, who steals every single scene she is in. Beautiful and a bad-ass through and through, she brings something to this part, and makes herself the movie’s highlight. Whether she is expressing her frustration in her relationship with her father, or fighting back and doing what is necessary to save the day, she commands the screen every single time we see her there. I look forward to seeing this young lady in more films down the road, and truly hope her career takes off. She deserves it.

One of the best things about seeing local/independent films versus the latest Hollywood blockbusters is that you have to see the crew make do with what little they have. Here, they have taken over a local bookstore, making it the primary set of the film, with what are presumably only a few minor changes to how it looks normally. This actually manages to create a movie that feels claustrophobic and suspenseful, which this experience needs. And while the film has a suspenseful, brooding tone throughout, it is certainly not above throwing in some comic relief, including a scene from villain Mark Justice, poking fun at a common trope of “imaginary characters” in stories, and how he isn't going to go away that easily.

That said, as much as I enjoyed the film, I did have some issues with it. The biggest issue was the scenes involving military personnel/locations/etc. These scenes were completely unnecessary and added absolutely nothing to the movie (nothing against the actors in the scenes, though). When these scenes came up, it felt like the plot stopped dead in its tracks, not to mention the sets utilized here looked outright “fake” compared to the real bookstore used for the bulk of the film. Keeping the movie relegated to the bookstore and its immediate surroundings would have kept things low key and personal. These scenes threaten to take the experience into generic blockbuster territory, and part of the reason one enjoys independent films is to get away from that.

There are also some plot holes and elements that go unexplained; even the resolution and villain origins never quite get the explanation they deserve. It is also rather disappointing that the villain’s plot ultimately equates to the old cliche of “I want to destroy the world.” Naturally, I don’t want to spoil anything for those that have not seen the movie, so I will not go too in depth here. Suffice to say, though, the positives of the film still outweigh any negatives.

Should you see Unwritten? While I wouldn’t call this a “great” film, there is still more than enough to make it worthwhile, including a fun premise and a great cast, with Brittany Hoza’s performance stealing the show. Plus, the run time of just over 80 minutes prevents things from dragging or getting too bogged down. If you have the opportunity to catch Unwritten, it comes recommended.

Unwritten is not rated by the MPAA, but my recommended rating would be PG-13 for thematic elements, alcohol use/references, language, and mild violence throughout.

DISCLAIMER: All images seen in this review are the copyright of their respective owners, including Got Film and Neven Films. For promotional purposes only. All rights reserved.

Every Day - Despite Its Best Intentions, ...