The Party... It's a Party Not Worth Attending!

Janet has just been appointed Minster of Health, and to celebrate her promotion, she invites several of her closest friends over, including a lesbian couple expecting babies, a gun-packing drug addict, and a wellness coach and his wife, from whom he has grown distant. Meanwhile, Janet’s husband has fallen into a mysterious depression, and he seems more interested in playing records on his phonograph than joining the festivities. Throughout the evening, new revelations from the host and guests are revealed, and it is clear their lives and friendships will never be the same.

With its small cast, and being set entirely in one location, The Party feels more like a stage play than a conventional movie. The black-and-white cinematography gives it a distinctive look, as well. Unfortunately, despite spirited performances from the actors and a few good one-liners, the film is pretentious, offensive, boring, and can’t even generate a single likable character in its run time of just over an hour. It isn’t clear if this is supposed to be a serious drama, a black comedy, or something in between, but it fails on all fronts. 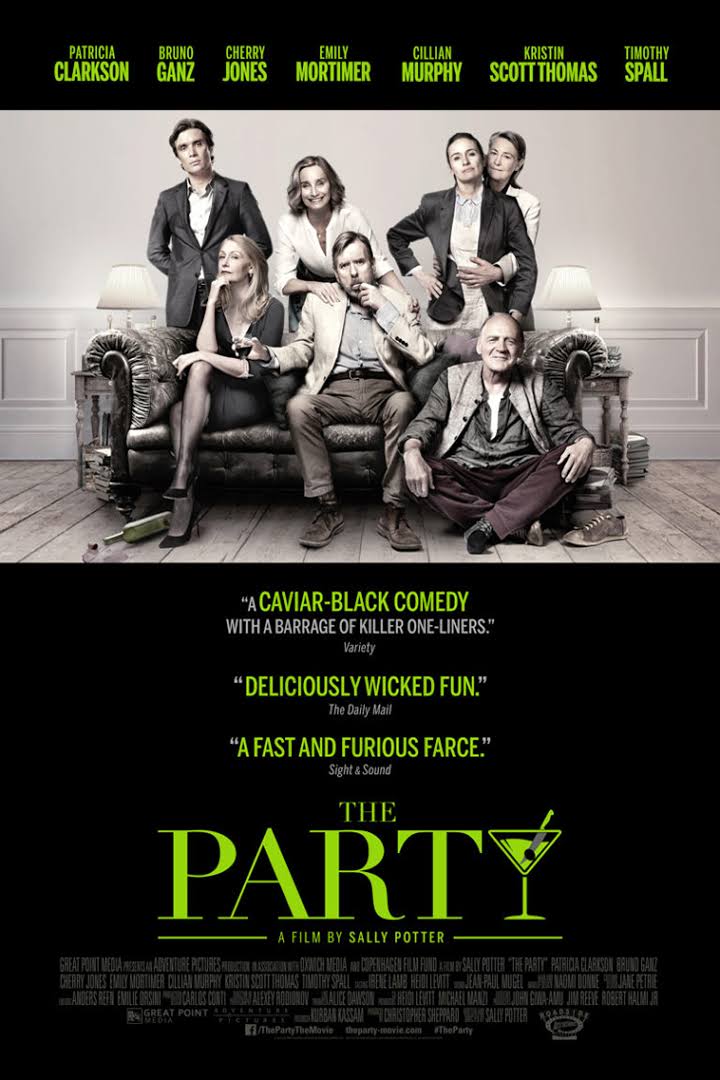 I’ll start by at least naming the things the movie does well. The look of the film is a strength; black-and-white films these days are a rarity, but this one looks surprisingly good. The cast is competent enough; Cillian Murphy, in particular, has plenty of fun with his role. Every now and then, there’s a sharp one-liner that generates a laugh.

Sadly, nothing else about this film works. At just over an hour, this is probably the shortest film I’ve ever seen in a theater, yet the dialogue-heavy script with nothing to break up the monotony makes it feel much longer and far less interesting. The tone and the script are highly pretentious, and the movie feels like it’s talking down to the audience. The players speak in ridiculously articulate language, like no one in the real world would ever speak. The sheer amount of over-the-top drama here is far from believable.

The biggest weakness of this film is that not a single character is likable. Characters are revealed to be adulterers in the most casual of manners. One character does drugs throughout the entire film. The persons here openly express their distaste and dislike for one another and their beliefs. A lesbian decides she hates her partner and finds her “disgusting” because she had sex with a man over 20 years ago. Characters physically strike a terminally-ill man (I’m not making this up!) It’s simply hilarious how people find the remake of Death Wish to be offensive and insensitive, yet no one bats an eye here, at a scene with people that physically abuse and assault a dying, terminally-ill man. Every single thing in this cast of characters is in bad taste. I have no problem with political incorrectness and over-the-top comedies, but here it's not funny at all. It's just plain bad. And offensive.

The Party is a disgusting film filled with unlikable characters, boredom-inducing dialogue-heavy moments, and some of the most offensive material I’ve ever seen in any movie. While I admire and respect the cast and cinematography, they can’t save this script or make the movie any more likable or appealing. Skip it.

DISCLAIMER: All images seen in this review are the copyright of their respective owners, including Adventure Pictures, Great Point Media, and Picturehouse Entertainment. For promotional purposes only. All rights reserved.