Solo: A Star Wars Story - The Force Isn't With This Star Wars Spin-Off!

Roughly a decade prior to his appearance in Star Wars Episode IV: A New Hope, a young Han Solo struggles in his day-to-day life on Corellia alongside old friend Qi’ra, where residents are forced to commit crimes to benefit the local boss, Lady Proxima. Han manages to escape without Qi’ra, and following a stint as an Imperial ground troop, forms an unlikely alliance with a group of smugglers. When a job goes wrong, they set out for a heist to cover their obligation to their employers, but quickly find themselves in over their heads, with Solo beginning to question what he stands for and who he is.

Solo will be the final Star Wars film to feature writing contributions from longtime writer Lawrence Kasdan, the scribe behind The Empire Strikes Back, the universally beloved “favorite” of the Star Wars world. But Solo had a troubled production from the start, with its original directors being fired, and Ron Howard being brought in as an eleventh hour replacement, who is reported to have reshot 80% of the existing footage amidst the chaos. 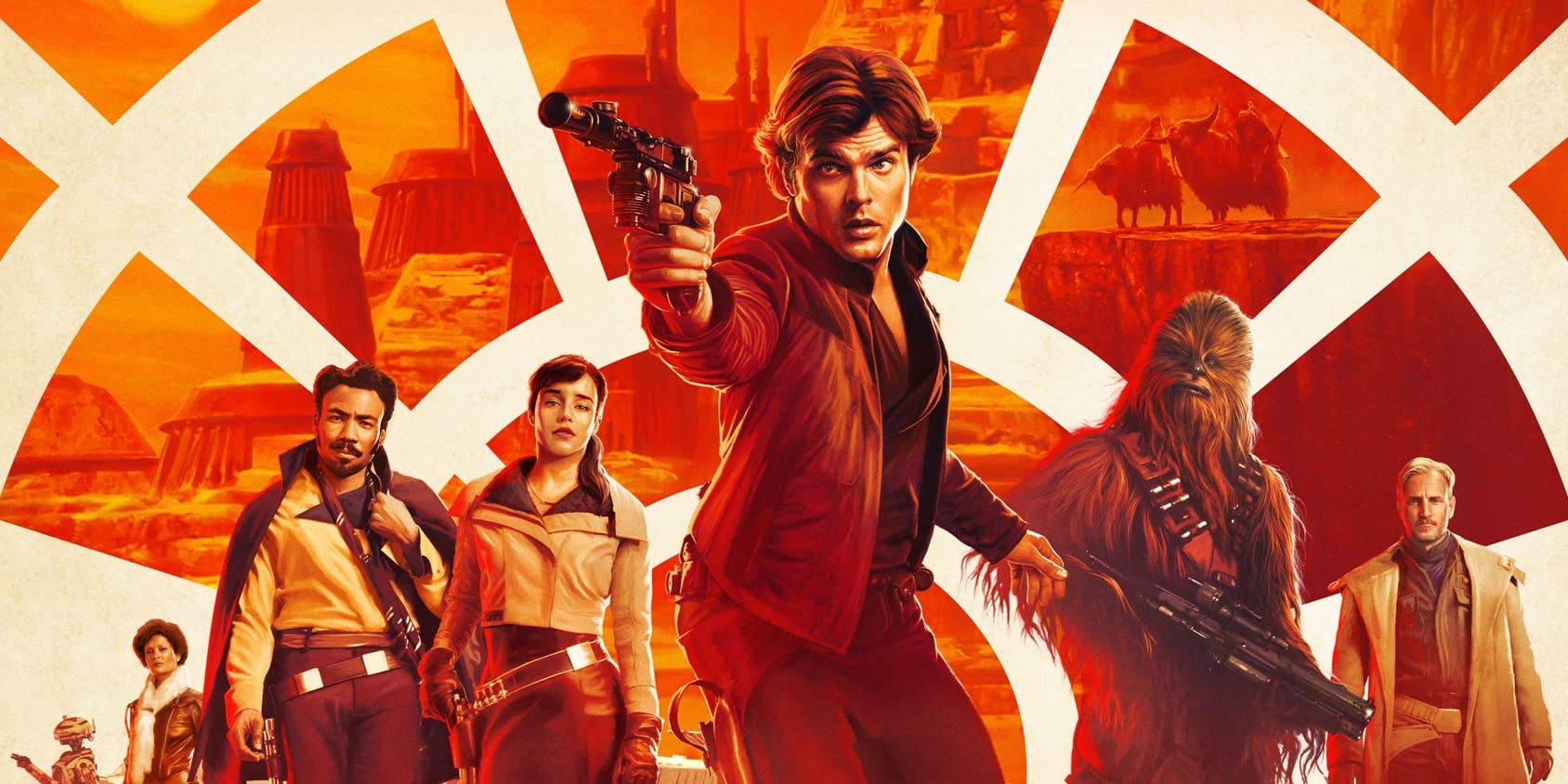 Unfortunately, the final product reeks of the behind-the-scenes drama that plagued its creation. Solo had great casting and its share of superb action sequences, but the final movie feels more like an unevenly-paced collection vignettes than a coherent film. Elements of the story are abandoned and never revisited, and characters betray one another a ridiculous amount to the point that the gimmick loses its effectiveness. It doesn’t help that the movie basically tries to cram every element of the Han Solo mythos and backstory into a single film. Did I mention the movie is nearly two-and-a-half hours long?

Let’s look at the positives first. Casing for the film is superb. Donald Glover as a young Lando Calrissian steals the show, with his charismatic personality which definitely conjures up images of a young Billy Dee Williams. Alden Ehrenreich proves to be a pleasant surprise as the young Han Solo, portraying the character in a younger and slightly more idealistic form than when we first meet him in A New Hope. My only familiarity with Ehrenreich prior to this movie was his part as a cowboy actor in the Coen Bros’ Hail Caesar, a hit-and-miss movie in which his character was the best element of the film. Fortunately, he does a good job here overall. Other familiar faces, including Chewbacca, appear here, as well as few other surprises I won’t spoil.

The new characters are quite good even if they don’t get the chances to shine they should, including Woody Harrelson as a smuggler who becomes something of a mentor to Han, and Phoebe Waller-Bridge as a sassy-mouthed, independent-thinking droid who serves as Lando’s co-pilot. Sadly, a lot of the newer characters don’t get the screen time or development we’d like, but most of them leave an impact while they can.

Unfortunately, aside from the casting and a handful of fun action sequences, the rest of the movie is a mess. The biggest weakness of Solo is that it doesn’t feel like a coherent film, but rather, a collection of vignettes and action sequences slapped together. I won’t argue that the movie delivers the action when and where it counts, but the behind-the-scenes drama was likely a factor in the movie feeling like a scattershot, unpolished work. For instance, the opening scenes of the movie deal with Han’s life on Corellia and dealing with crime boss Lady Proxima, but after these scenes, Corellia/Proxima are never revisited. This is hugely disappointing when the movie gives us an opening text sequence setting up the conflict on Corellia as a major plot point, when in the final film it’s anything but.

Anyone familiar with Star Wars knows elements of Han Solo’s backstory. He met and befriended Chewbacca. He gambled with Lando Calrissian and won the Millennium Falcon. He made the Kessel Run in 12 parsecs. But when we see these events unfold on screen, the effectiveness is hit and miss. It doesn’t help that this movie takes basically every element from the Han Solo mythos and backstory, and slams them into one overly long yet still rushed film. Believe me, you’re better off imagining how this happens and coining your own theories than watching what this film depicts. It’s disappointing to see that all these things, apparently, happened within a relatively small window of time which fills a single movie.

Too many other elements feel half-assed as well. Paul Bettany (best known for paying JARVIS/Vision in the Marvel Cinematic Universe) portrays a crime lord Han Solo finds himself doing a job for, but in a universe with crime lords that include Hutts and other exotic species and diverse characters, Bettany’s character just feels generic. The movie does seem to imply a potential sequel featuring Han and company is possible, which may be interesting, but the end results here don’t exactly leave me optimistic.

Solo was a film made with the best of intentions, but the end result shows the signs of its troubled production. Good performances and characters can’t save the movie from its anticlimactic narrative, rushed approach, and poor pacing. It doesn’t bring anything new to the Star Wars universe of substance, though there are a few fun moments and cameos for the longtime, die-hard fans. Is the Force with Solo: A Star Wars Story? Not quite.

DISCLAIMER: All images seen in this review are the property of their respective copyright owners, including Disney and Lucasfilm. For promotional purposes only. All rights reserved.