Overboard is directed by Rob Greenberg. The film stars Eugenio Derbez, Anna Faris, Eva Longoria, John Hannah, and Swoosie Kurtz. It’s a remake of the 1987 film of the same name.

Kate Sullivan is a single mother of three. She juggles multiple jobs with her studies to become a nurse. During a cleaning assignment on the yacht of wealthy playboy Leonardo Montenegro, she is stiffed for the work she does, thrown off his yacht (literally) and left frustrated. When an odd twist of events sees Leonardo suffering from amnesia and in the hospital in Kate’s town, her friend Theresa concocts the ultimate revenge scheme – taking advantage of his amnesia as a means to right the wrongs in her life. The plan works brilliantly at first, but Kate is surprised to find herself falling for Leonardo, and him becoming a good father figure to her girls! Will the relationship work, or will Leonardo remember his carefree party lifestyle and fall back into his old ways? 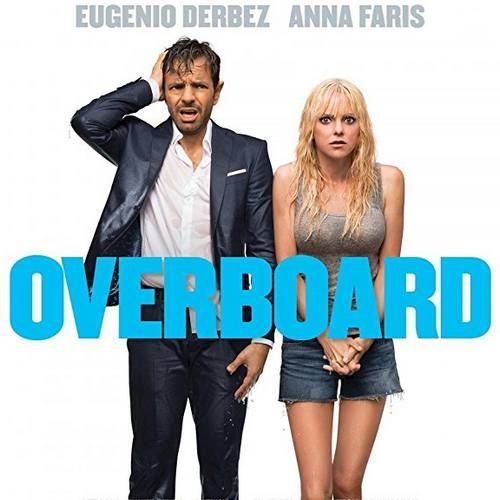 Overboard is a remake of film from the 1980s which wasn’t exactly a “classic” to begin with, with the major difference between the two movies being the swapping of the genders of the main characters (the original dealt with a single dad with several sons getting revenge on a vile wealthy woman, while here it’s a single mom with several daughters getting revenge of a wealthy man). There are some funny and heartfelt moments to be experienced with a superb cast, but the movie suffers from a narrative that is simultaneously rushed and overlong, predictability, unnecessary subplots, and an unusually high amount of subtitled Spanish dialogue for a mainstream comedy.

The movie deserves credit for its cast, particularly its leads. Eugenio Derbez, who I was admittedly unfamiliar with prior to seeing this film, is quite funny as an over-the-top wealthy playboy with little regard for the real world, but ends up becoming a more sympathetic character following his amnesia and newfound place in life. Anna Faris is equally entertaining as the stressed single mother who must juggle numerous tasks while simultaneously getting her revenge and what she needs to better take care of herself and her girls. The supporting cast includes some solid performances as well, including Eva Longoria as the best friend who concocts the “revenge on the amnesiac” scheme. Everyone gets a chance to shine, and many scenes feel genuine.

Sadly, it’s also a movie where the best scenes were used in the trailer. If you’ve seen the trailer, you’ve seen the best parts of the movie. Amnesia has always been a tired plot device, because it always very conveniently works the way the screenwriters want and goes away when it’s convenient for the plot. Overboard is no exception, and a predictable narrative doesn’t help things any.

What could’ve been a more streamlined movie gets bogged down in many unnecessary subplots, including a short one of Faris’ character’s mother abandoning her grandmotherly duties to perform on stage, and one of Leonardo’s sister trying to pass him off as dead so she can inherit the company. Neither subplot adds anything to the film. They feel more like exposition and plot devices than anything genuine.

Another thing likely to deter mainstream audiences is the surprisingly high amount of subtitled Spanish dialogue (something the trailer doesn't prepare the audience for). Don’t get me wrong; many of my favorite movies are foreign films entirely in other languages. But for a mainstream audience seeking a comedy this is simply too much. Subtitled dialogue used sparingly is acceptable in any English-language film, but when long passages and entire lengthy conversations utilize this gimmick it’s not exactly easy an audience not accustomed to this.

Overboard definitely falls short of greatness due to its predictability and numerous flaws, but it does have its entertaining, genuine moments. Don’t rush to the theater to see this one, but it’ll at least be a decent weekend rental when it gets a home release.

DISCLAIMER: Images in this review and the property of their respective copyright holders, including Metro-Goldwyn-Mayer, Pantelion Films, 3Pas Studios, and Lionsgate Films. For promotional use only. All rights reserved.