The First Purge - Violent, But Not Overly Compelling...

The First Purge is directed by Gerard McMurray. The film stars Y'Lan Noel, Lex Scott Davis, Joivan Wade, Luna Lauren Velez, and Marisa Tomei. This is the fourth film in the Purge franchise, and serves as a prequel to the other films.

A new political party, the New Founding Fathers of America (NFFA for short) has risen to power and elected a president. They have inherited a nation with many problems, including rampant debt, poverty, and crime. A researcher suggests a social experiment called the Purge, in which for a limited amount of time, all crime will be legal, thus enabling people to have an outlet for their unbridled rage while at the same time resulting in scum killing scum, essentially eliminating many of the impoverished. Staten Island is selected as the site for the experiment, with many people caught up in the crossfire, from parents and working-class folks to gang members and psychopaths. Will the Purge experiment be a successful one, and will the residents survive a night of unbridled chaos?

All right, I’ll admit it right away – I’ve never seen any of the other Purge movies. But the series is clearly popular and at least financially successful if it’s reached a fourth installment. The film’s excessive violence and community citizens coming together to fight a common enemy in a time of chaos make for some fun scenes, but the movie isn’t quite as smart or thought-provoking as it thinks it is. While the film has some potential it ultimately feels like a wasted opportunity, and the movie isn’t helped by the overabundance of “thug” stereotypes. 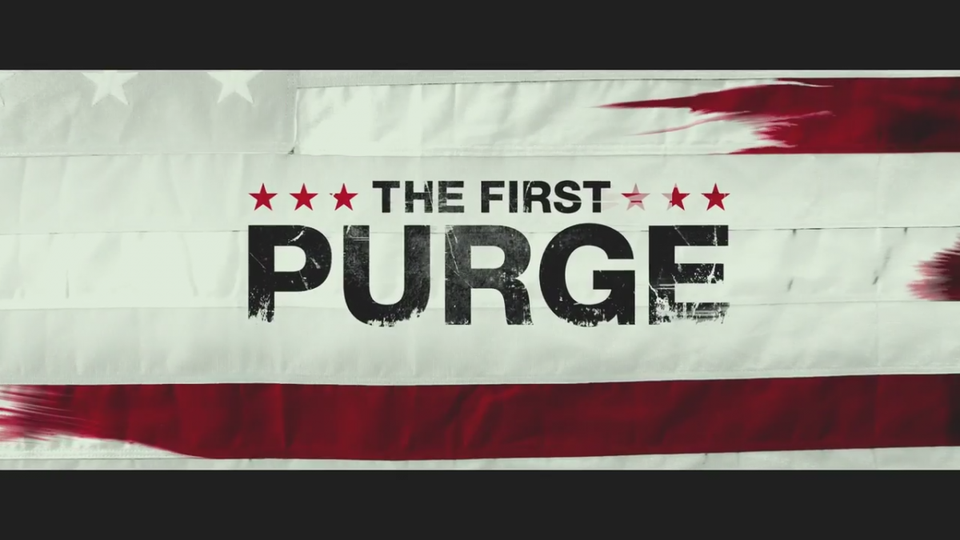 The First Purge succeeds in creating a haunting, surreal, gritty violent atmosphere. The film feels like something from another world, yet eerily familiar. Violence is excessive here, and as much as I hate to admit it, I couldn’t help but root for our heroes when they disposed of their foes in a gory fashion. Moments like this are where the film truly finds its footing. The news/political angle of the film is an entertaining touch, at times reminiscent of the satirical newcasts/commercials from RoboCop.

Unfortunately, the film falters in many areas despite the things it does well. The characters are largely one-dimensional thug stereotypes who don’t exactly do any favors for depictions of African-Americans on film. I found myself entertained by a few of the main heroes, but at large this isn’t a cast I wanted to spend any more time with than I had to. Characters who have potential are often wasted or cast aside only to be dealt with unceremoniously and anticlimactically later on. The movie could’ve been a great look at how the world got to be in the shape it was in to explain the origin of the Purge, but instead, the crew seems more interested in offering up a bloodbath, predictable plot twists, cliches, and nothing we haven’t seen before. The political commentary is of the not-so-subtle variety and doesn’t add anything to the experience.

I think the target audience for The First Purge and fans of earlier installments will enjoy what they see here, though it’s not the sort of thing I could recommend on a large scale. Put simply, if you think you’re in the target audience for this film, you probably are, and if you don’t think you are, you probably aren’t. It doesn’t bring anything new into the world of violent horror, but it’s not without its (exceedingly violent) charms.

DISCLAIMER: All images in this review are the property of their respective copyright holders, including Blumhouse Productions, Universal Pictures, and Platinum Dunes. For promotional use only. All rights reserved.