Frank Fisher is an ex-musician running a record store in New York who lost his wife several years ago. His daughter Sam loves to have “jam sessions” with her father, but is leaving for the West Coast in a week to pursue her dreams of becoming a doctor. Sam finds himself struggling with her relationship, her life goals, and wanting to make music with her father. When her dad puts one of their songs online and he wants to further pursue music with Sam, she finds herself torn between staying in New York with the father she loves and making music, or going to college to make a career for herself.

Hearts Beat Loud isn’t exactly an original film, and it does struggle to juggle too many subplots. But the film succeeds because of the chemistry of its two leads, a strong supporting cast, good music, relatable characters and circumstances, and memorable moments. 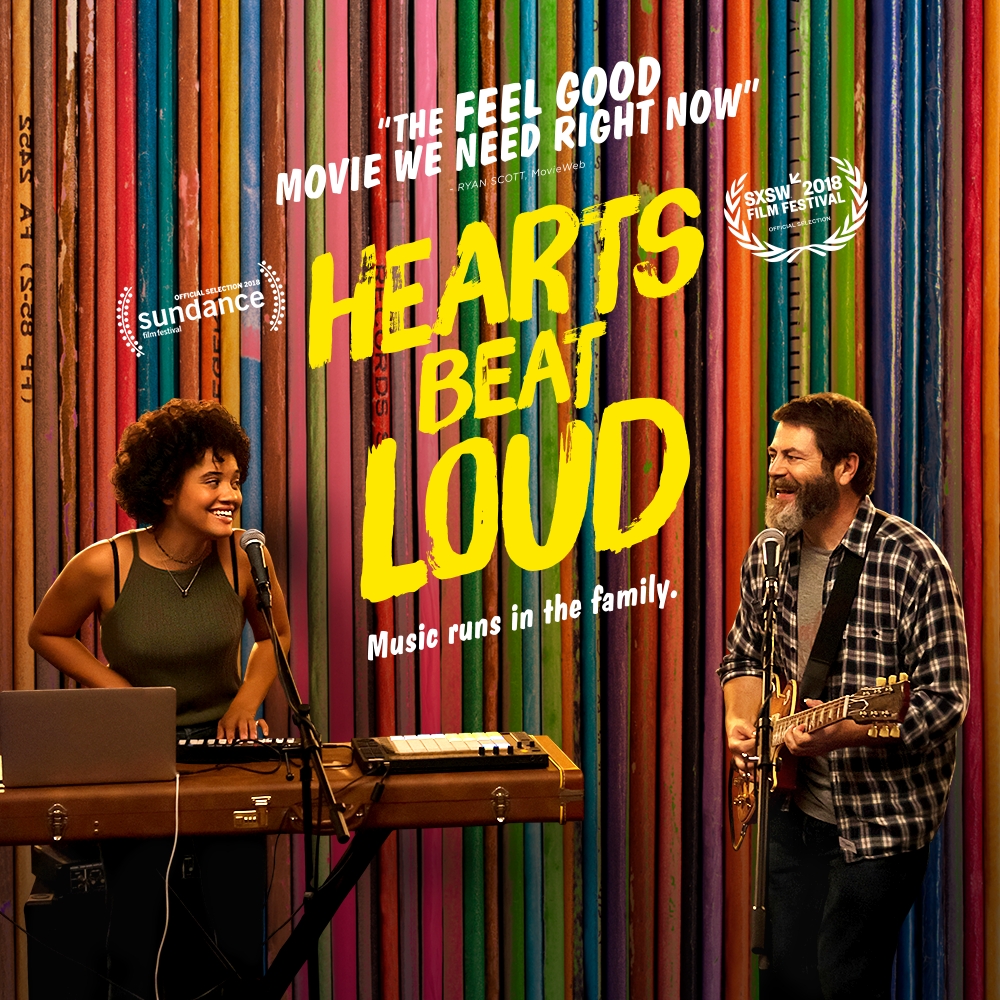 There aren’t enough good things to be said about Nick Offerman and Kiersey Clemons. Offerman, in particular, despite playing the dramatic side of this role well, has a witty quip for every imaginable circumstance, with these moments being major highlights. Clemons handles the “confused girl coming of age” part well enough, giving the movie its much needed dramatic edge. The supporting cast is fantastic, including Toni Collette as Frank’s landlady, Sasha Lane as Sam’s girlfriend, and even Ted Danson as Frank’s lifelong friend who owns and runs a bar (Ted Danson playing someone owning and running a bar… why does this feel familiar somehow?)

The film manages to get its point across without a huge budget or over-the-top sequences. It’s a very down-to-earth, low key film, and its human characters benefit from this. You’ll find the situations and the characters relatable and likable for these very reasons.

The biggest problem with the otherwise excellent film is it simply tries to do too much. There are too many subplots, some of which end up feeling tertiary and unnecessary. I love Blythe Danner, but she’s in like three scenes. You could easily have cut her role from this film and no one would know the difference. A handful of other subplots fare similarly; 10 minutes or so of edits would’ve streamlined the final product in the best of ways.

Despite some issues here and there, Hearts Beat Loud is a fantastic drama with everything from laugh-out-loud sequences to tear-jerking dramatic ones. It’s not the most original thing this moviegoer’s ever seen, but it’s pretty damn good for what it is. Don’t miss this one.

DISCLAIMER: Images in this review are the property of their respective copyright holders, including Burn Later Productions, Houston King Productions, Park Pictures, and Gunpowder & Sky. For promotional use only. All rights reserved.

Won't You Be My Neighbor? A Documentary ...