Home›Movie Reviews›Scream for Me Sarajevo - Bruce Dickinson's Concert in a War-Torn Nation!

Scream for Me Sarajevo - Bruce Dickinson's Concert in a War-Torn Nation!

Scream for Me Sarajevo is directed by Tarik Hodzic. The documentary features new interview/travel footage as well as archival footage from the events depicted in the film, and a soundtrack from Bruce Dickinson/Iron Maiden.

In the 90s, Sarajevo was under siege with war and violence escalating in the streets. The locals tried to go about living their lives under the circumstances, including rock and roll fans and musicians. Under risk of death in streets which became battlefields, Bruce Dickinson and his Skunkworks band traveled into the heart of the war zone to put on a concert for the locals, revitalizing their spirits in a time of danger and chaos.

The marketing for this film is somewhat misleading, as one would think it’s primarily about Bruce Dickinson’s experiences performing in Sarajevo, or a documentary about the concert his band and local musicians there put on. Scream for Me Sarajevo tries to reach further, giving the perspective of locals as to the chaos which erupted in their country. People viewing the film wanting a documentary strictly on the concert/Dickinson/etc. will be disappointed, but it actually does a solid job painting a picture of a war-torn nation populated by heavy metal fans trying to go about living their days with passion. Still, one wishes it had been longer and went into more detail about the history of the conflict. 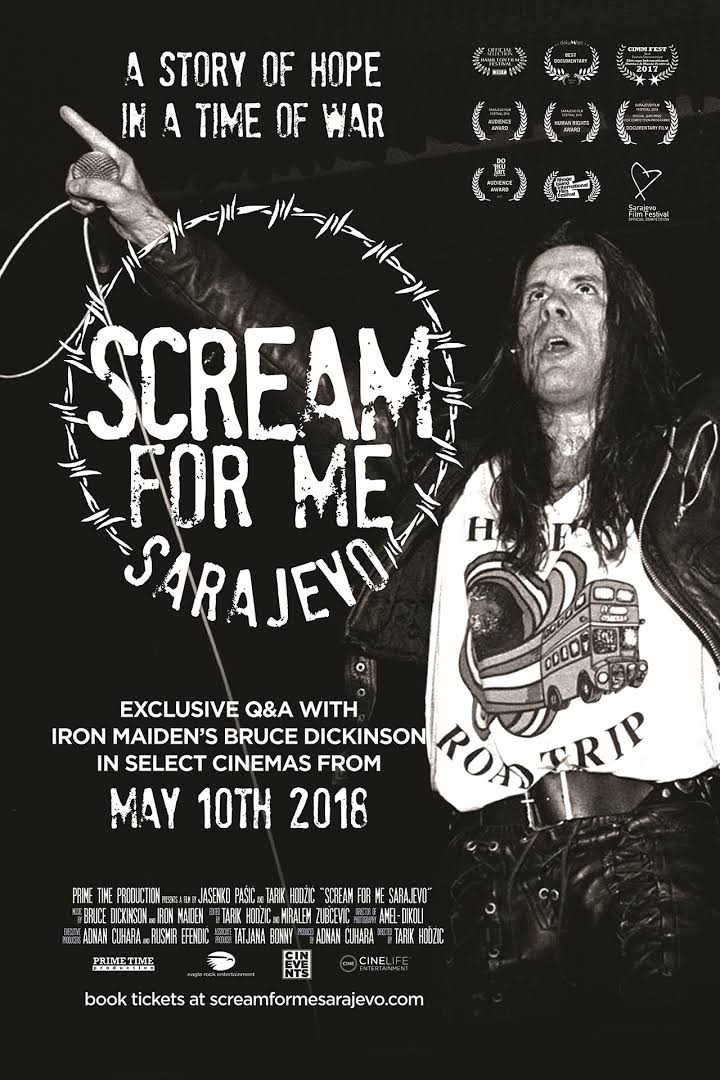 The film deserves credit for its efforts in unearthing the conflict in Sarajevo through the eyes of the people who were there. We see how these sites look today as well as vintage video and photographs, as well as new interviews. Seeing how their home became a battleground for an unexpectedly long period of time makes for some intriguing viewing. It’s definitely enlightening to those who take their everyday working-class lifestyles for granted. Unfortunately, the film doesn’t delve deeply enough into the roots of this conflict, so many viewers will be wondering what started it/why it happened/etc.

It’s also a delight to hear from Dickinson and company, who agree to do this concert despite the lack of protection and war-torn atmosphere of the day. Despite the dangerous conditions Mr. Dickinson remains his usual humorous self about things. While I wish the film had focused more on the concert itself, getting to hear a famed rock vocalist open up about an experience like this is a priceless experience you won’t find elsewhere.

The Blu-ray Disc from Eagle Rock features solid video and audio quality, though picture quality obviously suffers in many of the shots of archival footage. Disappointingly, there are no bonus features/supplements on the disc. Much of the doc is told in the native language of the people interviewed, with subtitles translating these moments. A separate soundtrack CD is also being sold.

This is a flawed documentary which underemphasizes the concert itself and doesn’t tell us enough about the conflict in question, but it still succeeds in creating a snapshot of a bygone era in a war-torn atmosphere with gritty stories and the visuals to back them up. Scream for Me Sarajevo certainly comes recommended.

DISCLAIMER: All images are the property of their respective copyright holders. For promotional use only. All rights reserved.

Ant-Man and the WASP - Earth's Mightiest ...