Eighth Grade - One of the Year's Best Films!

It’s Kayla Day’s last week of middle school, and she’s filled with anxiety regarding what’s coming next in her life. Despite being socially awkward and quiet in school, she’s good-natured and likable, living with her single father and making videos online to inspire others. Kayla struggles to fit in, trying to put herself out there and meet new people, having her share of coming-of-age experiences in an unpredictable, transitional time.

Eighth Grade is a brutally honest look at what today’s teenagers go through in their transition towards the high school years just ahead. The film is powerful thanks to Bo Burnham’s direction and writing, a career-defining performance from Elsie Fisher, a solid cast of relative unknowns, and a willingness to not tone anything down (the film is actually rated R despite an emphasis on eighth-grade characters). It’s not quite a perfect movie, but it’s still one of the best I’ve seen all year. 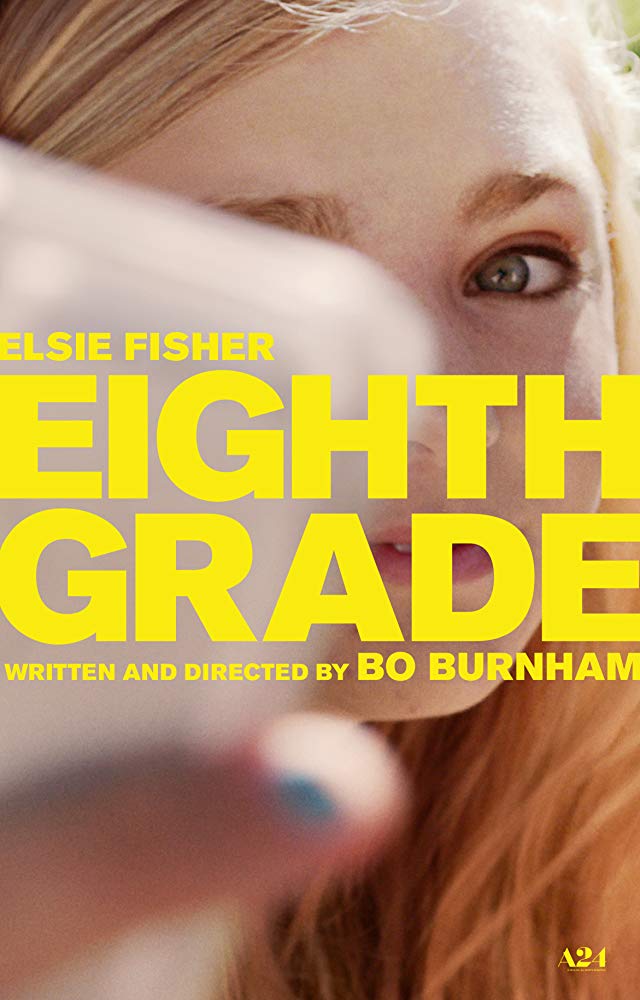 This comedy-drama is Bo Burnham’s first film as a director and writer, but if you didn’t know better, you’d swear the guy has making movies for years. It’s a razor-sharp script with powerful, dramatic moments and laugh-out-loud, hilarious ones which put most dedicated comedies to shame. In a mere 95 minutes, he makes us fall in love with this world and these characters. Half the time you won’t believe what you’re hearing, and I mean that in the best of ways. It’s Bo Burnham’s first movie, but I most definitely hope it’s not the last.

The biggest highlight of the show is Elsie Fisher as Kayla Day. Much like director Burnham, her experience in the film world is limited, but she’s absolutely perfect for this role. It’s nice to see a movie with a middle school as its main character who actually LOOKS and ACTS like a middle schooler, and isn’t someone much older trying to portray one. And she owns every scene of this movie with her authenticity. She’s got zits on her face. She struggles to hold a conversation. She makes mistakes when recording dialog for her videos. At a pool party, she’s self-conscious upon seeing her crush and her more shapely classmates. She has anxiety attacks. The school’s resident “mean girls” would rather stare at their phones than listen to her. When a classmate asks about sex, she has to nervously act like she knows what she’s talking about when she really hasn’t got a clue. Her awkwardness and fears are a hundred percent relatable. No matter who you are, you’ll see a piece of yourself in our young heroine here.

The supporting cast fares nearly as well, including Josh Hamilton as Kayla’s father who she has something of a strained relationship with despite his best intentions. Other highlights include Emily Robinson as a high school Kayla befriends, and Luke Prael as the delinquent classmate she pines for.

If there’s one minor shortcoming to this otherwise superb film, it’s that a number of smaller potential subplots/characters/etc. don’t quite get the proper emphasis. The biggest disappointment in this regard comes in the form of Kayla’s crush Aiden, who gets a few great moments early in the film, but then basically gets cast aside for the rest of the run time. That said, any weaknesses with the movie are minor and shouldn’t deter you from seeing it.

Eighth Grade has laugh-out-loud comedy, down-to-earth drama, great writing and direction from Bo Burnham, and a breakout performance from Elsie Fisher, who I hope to see in movies for years to come. Very highly recommended.

DISCLAIMER: Images in this review are the property of their respective owners, including A24 and Scott Rudin Productions. For promotional use only. All rights reserved.

An additional note: As was previously stated, despite the movie involving mostly eighth graders, it’s rated R, primarily due to some sexual dialogue and strong language. If you’ve got kids who go to a public middle school, though, there’s probably nothing here they haven’t been exposed to in some shape or form. The film features no overly explicit content, and has no actual nudity or violence. Your eighth-grade aged kids can probably handle the content of the film fine, just think before taking them.