Matias and his group of friends love jumping online for group chats and playing internet games, but he's also struggling to maintain a relationship with Amaya, a deaf girl he has difficulty communicating with. Upon acquiring a new laptop and going online with his circle of friends, he begins receiving mysterious threatening messages, and uncovers some shocking content on the computer which may be relevant to the disappearance of a missing local girl. It’s up to Matias to make the right decisions to help the victims of a mysterious group, and ensure Amaya will not be in danger.

Upon Dark Web starting, I was impressed by the way the film told the story through computer windows only, making for a rather interesting introduction to this world. I was especially surprised to find that it wasn’t an intro, but a setup for how the whole film would be told! I admire Dark Web’s approach to unique storytelling, though admittedly this gimmick does manage to wear out its welcome. The story and events themselves are so full of plot holes and shoddy storytelling that attempts to fix it all with a twist ending don’t go so well. Overall, I’d say it’s a good enough film with a unique way to tell its story, but falls well short of greatness. Still, there are worse ways to spend 90 minutes. 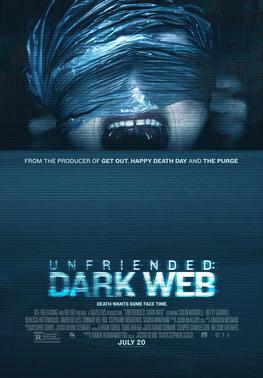 I will give the movie credit for its unique gimmick of telling the story strictly through computer screens, including video chat and messenger windows. Admittedly, the Apple and Facebook product placement gets a bit tiresome, as does the gimmick itself, but it’s worth acknowledging when a movie does something different you wouldn’t expect to see in a mainstream film. Still, one can’t help but wonder if a production employing this gimmick would have been better relegated to a half-hour short, perhaps on the television airwaves. I’ve seen reviews bashing the film for being “too real,” and I can relate seeing as how I basically stare at what’s on screen all day at home and at my day job.

The characters and the circumstances, despite some good performances from the young actor, unfortunately end up falling into all-too-common tropes. A character is shown standing close to train tracks… gee, what could this mean is going to happen to that person? Characters pay the price for their dumb decisions in more than a few scenes. Despite originality in the way the story is told, parts of the film can’t help but feel like one you’ve seen before.

And then there’s the shoddy writing and plot holes. It’s hard to get into this without spoilers, but much of the plot involves an enemy trying to reclaim a stolen laptop because it includes sensitive information and illegal content, and it was supposedly sitting in lost-and-found bin in Matias’ work for three weeks or so. If this thing was so important, why did no one come for it before? Why would it be allowed to linger somewhere? A plot twist at the end of the movie tries to undo these faults, but it’s doubtfully audiences are going to be buying it.

I’ve bashed the movie a lot, and while Dark Web certainly has problems, it’s not a total loss. When it hits home video formats it will make for a decent weekend time-killing rental.

DISCLAIMER: Images in this review are the property of their respective companies, including Bazelevs Company, Blumhouse Productions, OTL Releasing, and BH Tilt. For promotional purposes only. All rights reserved.

The Darkest Minds - Another Day, Another ...