2001: A Space Odyssey (hereafter simply referred to as “2001”) is directed by Stanley Kubrick, and based on a story by Arthur C. Clarke. The film stars Gary Lockwood and Keir Dullea, and was originally released theatrically in 1968. The movie was reissued in IMAX theaters for one week in August 2018, with a 4K UHD home video release on the way in October.

At the Dawn of Man, humanity’s ancestors struggle against the attacks of deadly animals and face opposition from rival tribes. The coming of a strange black monolith grants them mysterious knowledge. They become an armed society who fends for themselves and survives against insurmountable odds.

Several million years later, mankind has reached the stars, with space stations and shuttle flights from Earth to the Moon being commonplace. A scientist heads into space to learn about a mysterious disturbance on the lunar surface amidst conflicting rumors… where they discover a monolith similar to the one which once stood on the Earth’s surface millions of years ago, transmitting a strange tone towards the planet Jupiter.

A year and a half later, in 2001, a space expedition to Jupiter is launched, headed by astronauts Poole and Bowman, and the HAL 9000 supercomputer, while the remainder of the crew stays in suspended animation for the journey there. On their way to investigate the mysterious recipient source of the Moon monolith’s tone, the two humans encounter difficulties with HAL, when the seemingly error-proof computer makes a mistake, prompting the two to decide how much to handle the expedition. 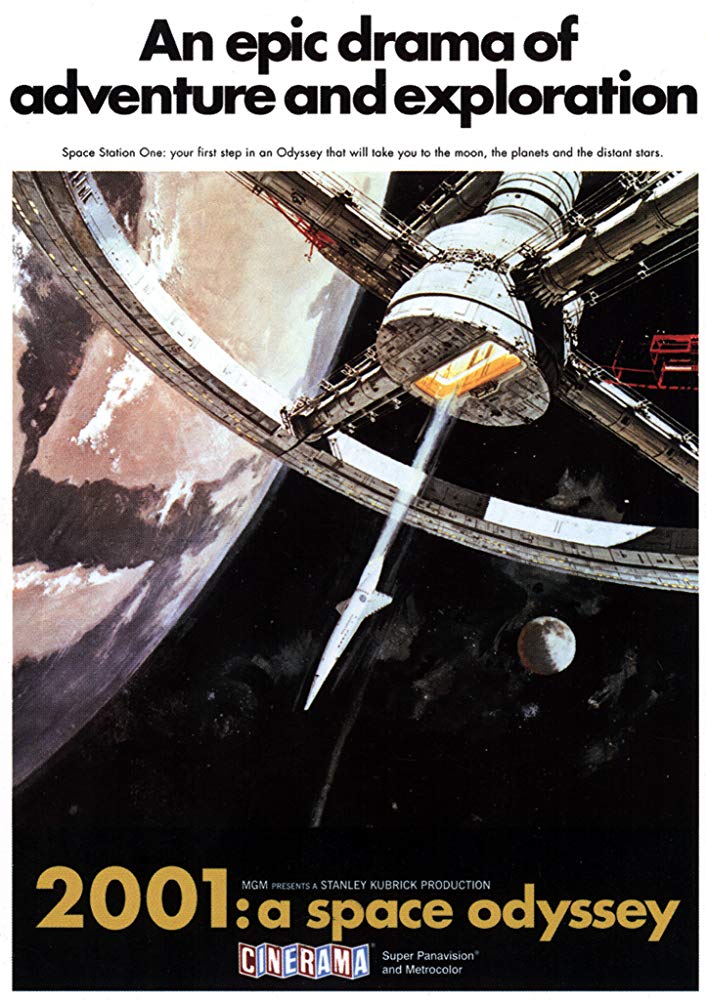 2001 is hailed as a classic, although the movie does have its detractors. Make no mistake; this is not a CGI-filled action spectacle with battles and explosions left and right. Rather, it is a tale combining science fiction and science fact, and one which features a narrative in which the climax offers more questions than answers. This isn’t a movie you’re necessarily going to fall for on your first viewing (I honestly wasn’t a fan the first time I watched it) but it’s one where open mindedness and patience for the material combined with repeat viewings will pay off in the long run. Spectacular visual effects which have aged surprisingly well over 50 years are one major reason the movie remains what is arguably the most famous film ever directed by the legendary Stanley Kubrick.

It can’t be denied that 2001 will keep your eyes glued to the screen due to its memorable visuals. Even people who are the film’s detractors won’t deny it looks amazing, even all these years later. The real strength in the film lies in its use of practical effects. All sets and models are handmade as the film far predates modern computer graphics. Whether it’s a tribe of humanity’s ancestors in a desolate desert fending their lives, a space shuttle boarding a station orbiting earth, or a surreal passageway into the unknown with a conclusion which continues to spawn multiple interpretations, the movie’s appearance is just one element which keeps it relevant and popular.

The structure of the film is certainly unusual, but again this stands as something which makes the experience memorable for viewers who approach the material with patience and open-mindedness. The movie is divided into a number of acts, with large stretches of the film, including roughly the first and last half hour, containing no dialogue whatsoever. Kubrick makes the wise decision to let the visuals do the talking for him, only using speech to build up the human characters and the basic plot where necessary, or in select action sequences involving the humans.

One other unusual choice in the movie but one which works to its advantage is Kubrick’s decision to use existing classical music recordings to go along with the visuals. Regular Kubrick collaborator Alex North had composed a score for the movie which ultimately went unused in factor of the traditional classical tunes, which include Richard Strauss’ “Also Sprach Zarathustra,” which serves as the title music and something of a “theme” for the movie, Johann Strauss’ “Blue Danube,” and music from Khachaturian’s Gayane. It’s an innovative technique which came about largely by accident, as the scenes were temp-tracked with the classical compositions, but the combination of state-of-the-art sci-fi visuals with beautiful tunes gives the film its atmosphere in the largely wordless sequences.

Unlike many films which have a largely dated vision of the future when they’re revisited decades later, 2001’s vision of the eponymous year actually holds up surprisingly well. In our real modern world, space travel has expanded by leaps and bounds. Astronauts really do visit a space station away from Earth. We’ve walked on the Moon for real. Technology like flat-screen televisions and video phone calls are commonplace in our everyday lives. In one scene a character is seen having a pleasant conversation with a group of Russians (keep in mind the film was made during the Cold War). Okay, maybe there are a handful of things the movie got wrong, including Pan Am Airlines no longer being in business, and the fact we haven’t yet discovered the secrets to putting living human beings into suspended animation, but the movie ultimately got more right than it didn’t!

I won’t deny that the movie isn’t perfect. The two-and-a-half hour runtime is a bit excessive, and the human characters don’t really get the depth or development we’d like. Hell, HAL is more interesting than they are. Again, I stress that the film isn’t for everyone; young people weaned on cinema with action every second, CGI, battles, and endless explosions will likely be bored. It’s arguably Stanley Kubrick’s most famous film, yet ironically the least accessible for mainstream moviegoers. Those with open minds who give it a chance, however, will experience a cinematic journey unlike any other.

I had the pleasure of experiencing 2001 on an IMAX screen, and it’s great to see the effects and hear the music on the best screens and sound equipment available. If there’s one complaint with these version of the film, it’s that scenes with high-pitched aural tones are painfully loud, to the point that viewers will fill like their ear drums may split (one younger viewer in my screening even said he thought it was the theater’s fire alarm!) 2001 will never look like a “modern” movie, but there’s nothing wrong with that. It looks and sounds the way Kubrick intended.

With the arrival of its 50th anniversary, there’s no better time to rediscover 2001. The 4K UHD remastered release is slated for October, which is bound to be the definitive home video release. Experience it again, or for the first time!