Foster child Elijah is reunited with his incarcerated brother Jimmy upon Jimmy’s release from prison. But the family reunion doesn’t last long, with gangsters who Jimmy owes money are upon him, resulting in the death of the boys’ father. Jimmy takes his brother on the road without telling him the truth, with Elijah carrying a mysterious futuristic weapon he found at a construction site. Being trailed by the gang and the unknown owners of Elijah’s strange new weapon, and making friends with a stripper, the group continues their travels west across the country, preparing for the inevitable.

Just writing that plot summary was exceedingly difficult, because Kin is a mess of a movie which feels like about three unrelated screenplays slapped together haphazardly. Despite the occasion fun action sequence and a cool futuristic weapon, the movie fails to produce likable characters. Furthermore, it contains a number of scenes and plot points which are not appropriate for the family demographic. 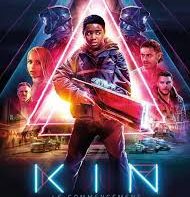 I’ll give the movie credit for introducing Myles Truitt, who’s the closest thing the movie manages to have to a sympathetic and interesting character. While his daily life and past prior to the movie isn’t explored as much as it should be, I do hope to see this young man in more films, because he’s got the potential to go places. The scenes of him attempting to bond with his brother and firing the film’s strange weapon are its most entertaining.

Unfortunately, nothing else works.

Nearly everyone else in the cast falters. Dennis Quaid gets in a decent monologue but his character is killed off early on the movie (not really a spoiler since it drives the main plot of the film), and his few other scenes are largely forgettable, feeling too much like other characters he’s played. James Franco gives what is easily the worst performance of his career has a music-obsessed gang leader, who feels more like a parody than a villain to be taken seriously; I was seriously more intimidated by his portrayal of Tommy Wiseau in The Disaster Artist! Zoe Kravitz (who also played a stripper in X-Men: First Class) had potential here, but her character ends up feeling like a cliche and is basically tossed aside in the third act. We do get a cameo from a modern A-list star I won’t name here near the end of the movie, but it feels more like a “winking at the camera” cameo than anything meaningful.

By far the biggest disappointment of the film is Jimmy, the character portrayed by Jack Reynor. I can understand the need for flawed characters who’ve made mistakes in the past who work on a path towards redemption, but this character is so bad and such a terrible influence on Elijah that we really don’t care what happens to him. Rather than telling him the difficult truth about his father’s fate, he conceals the truth, takes his (14-year-old!) brother into strip clubs, has him make friends with strippers, and coerces him to commit armed robbery.

That last sentence wasn’t a misprint.

What’s supposed to be a PG-13 film, largely focused on familial themes, features a sequence of an ex-inmate taking his 14-year-old brother into a strip club, with a major character being a stripper wanting to escape a bad past life. The trailers up-play the familial elements and the sci-fi ones, yet in the final film the sci-fi elements feel like an afterthought, and there’s no real mention of the more mature elements which feel out of place in such a movie. Parents may want to think twice before taking their kids.

The major elements of the movie never really come together; we’ve got a plot about brothers bonding, one with the gang members hunting down Jimmy, and the strange sci-fi troopers approaching. The latter receives the least emphasis, making a major plot twist near the end of the movie all the more difficult to swallow. The attempts to set up a sequel (something more movies like this seem intent on doing) is laughable since I doubt audiences will have any desire to further their experience here.

Kin is a laughably bad movie where none of the elements come together property. It fails to produce likable characters, positive influences, a coherent plot, and anything worth keeping one’s attention outside of Myles Truitt and his trusty weapon. I hope to see Truitt in better films which make use of this talents, but skip this one. You'll likely see it pop up on my "Worst of the Year" list when the time comes.

DISCLAIMER: Images seen in this review are the property of their respective owners, including Summit Entertainment, No Trace Camping, 21 Laps Entertainment, and Lionsgate. For promotional purposes only. All rights reserved.