Maybe I’m turning into an old fart at the ripe old age of twenty-seven or maybe I just know what I enjoy in my metal but typically I don’t care for shred for the sake of shred, the abundant use of popular riffing techniques seen in modern prog metal genres such as djent, or electronica for that matter. So I wasn’t expecting to have a very high opinion of Jacky Vincent’s new solo record ‘Life Imitating Art’.

I am happily admitting that I was wrong. I’m finding that in addition to all the things that would turn me off about this album there is plenty to still be excited about. I like this record for many of the same reasons I like to put on classical music. The sort of classical music that’s on the verge of being so dense the various instruments nearly get lost in the mix but to the attentive listener the piece actually turns out to be nearly pristine.

An excellent example of this is the opening track “Awakener”. The main guitar melodic themes are repetitive enough that it has plenty of  time to sink in with the listener while maintaining enough variation to keep the song interesting. You get the same feeling in many of the solos as you do with what I see as the two main “themes”.

The next song “Nowhere To Look But Inside” starts with a part that isn’t so much the ‘oh shit’ moment I like in a similar intros to a song but an uplifting moment that carries the same punch.

The same song has the first moment that I won’t say doesn’t belong (because I’d like to think I’m not that much of a dick) but it just didn’t resonate with me. I’m talking about the reggae clean rhythm that carries the song to it’s conclusion. While to my ears it seemed forced and tacked on, maybe to you dear reader a little reggae is just the perfect spice to your shred.

Not too hot on “The Streets Are My Racetrack”, not a bad song but perhaps straying too far from my personal tastes. The car engine samples are a but on the nose and funnily enough caused a bit of distraction while listening to this album the first time. Had to turn the volume down after asking myself “Who the fuck is driving like that here of all places?” Nobody that’s who.

Lastly the Bach-esque opening and blues riffing not to mention the title to “Jacko’s Modern Life” made for a laugh as well as a kickass albeit short tune.

Well reader I can say with confidence that if you’re jonesing for your next shred album the English-born/Las Vegas resident Jack Vincent has just the thing for you. ‘Life Imitating Art’ comes out… the end of last month  it seems - so gets your copy now!

Oh by the way he’ll be performing at Beauty Bar on September 14th so, will we see you there? 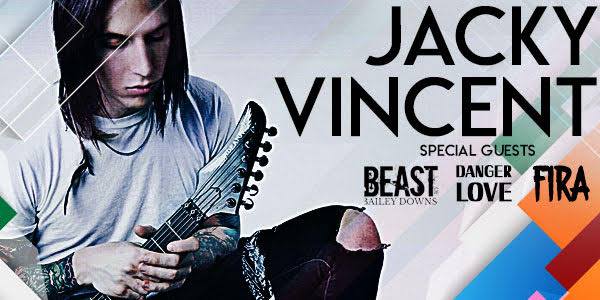 Another Successful Album, and Tours of Europe ...