Home›Movie Reviews›Bad Times at the El Royale - A Priest, A Hippie, A Singer, and a Salesman Walk Into a Hotel Bar...

Bad Times at the El Royale - A Priest, A Hippie, A Singer, and a Salesman Walk Into a Hotel Bar...

The El Royale is a desolate Lake Tahoe hotel which is long past its glory days, giving its guests the option of staying in a room on the California side, or the Nevada side, as it straddles the border between the two states. An aging priest, a salesman, a hippie girl on the run from a cult leader, and a struggling singer walk into the El Royale to get rooms for their own reasons, but it quickly becomes apparent there’s more to the hotel than meets the eye, with each person present having their own backstory and reasons for being there, many of which aren’t immediately obvious. In the heart of a storm, the true intentions of the hotel guests become apparent.

Bad Times brings a sharp script, a perfect cast, an entertaining story, memorable cinematography and locales, and a brilliant way of telling the tale to the audience. From its memorable opening single-camera pre-title sequence, it takes sharp and unexpected turns countless times in its 140-minute duration. The multi-tiered story will likely draw some Quentin Tarantino comparisons, but Drew Goddard’s film takes on a life of its own, and stands strong as one of the best films of 2018. 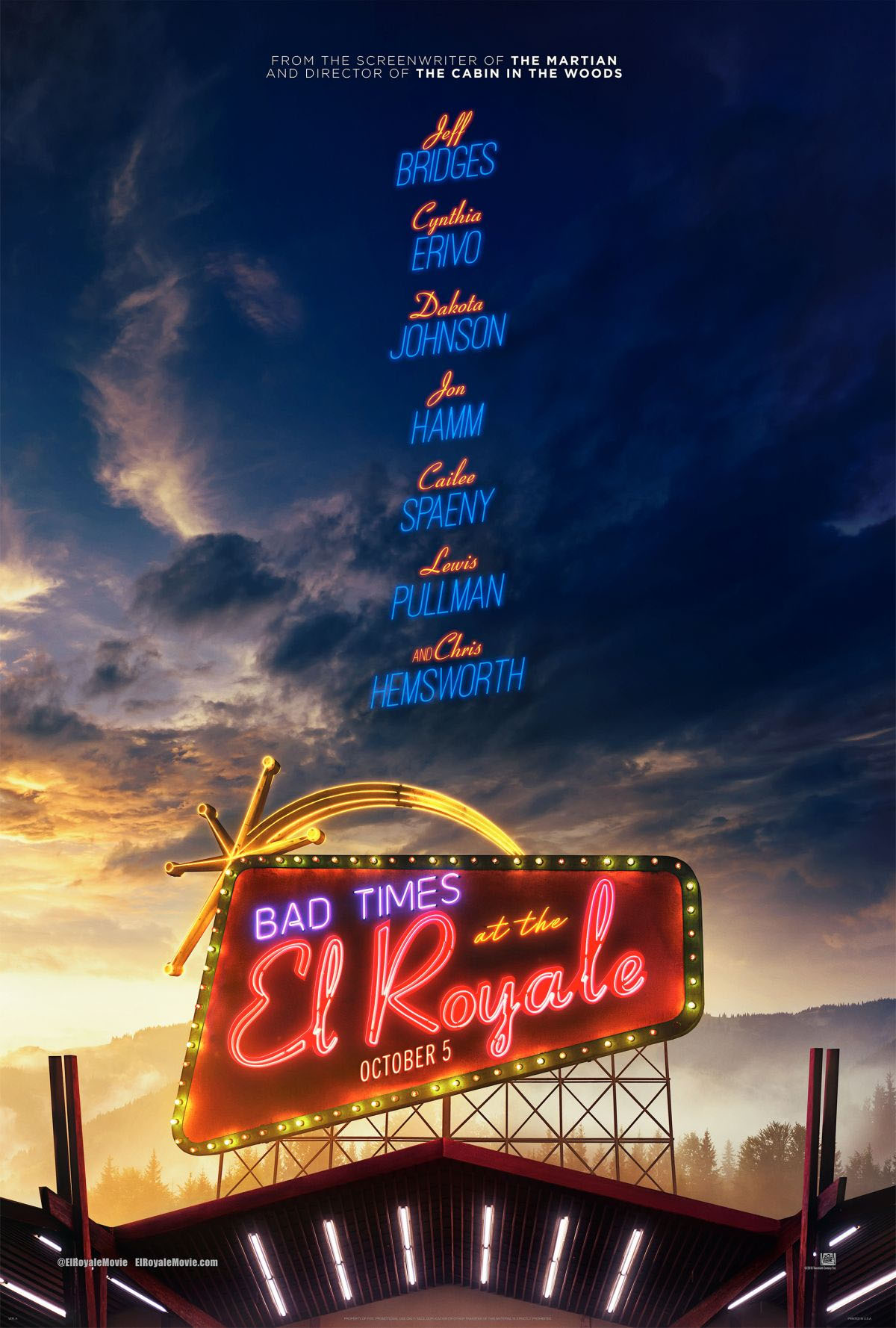 The casting in Bad Times is brilliant, and Goddard makes the smart decision of keeping the primary cast small. We’ve got Jeff Bridges as an aging priest who may not be all he seems at first glance, Chris Hemsworth (Thor from the Marvel Cinematic Universe) as an eccentric psycho cult leader, and Jon Hamm as the frustrated vacuum cleaner salesman, to name a few. To be honest, outside of Bridges and Hemsworth, my familiarity with the cast was fairly minimal, but I’m glad to see they didn’t simply turn the movie into a “star vehicle” for Bridges and/or Hemsworth. Everyone is perfectly cast, and the sharp script makes the moments involving these varied persons all the more memorable. It’s a serious affair with plenty of shockingly violent moments, yet still finds time for moments which are laugh out loud funny, and these don’t come at the expense of the suspense or drama.

The cinematography in the El Royale and its rainy surroundings build the perfect feeling of suspense and claustrophobia, and coupled with the intense revelations of the film’s starring players and the fact that the movie can change its tone in the blink of an eye with abrupt and often violent results, your eyes will be glued to the screen. The narrative takes time to focus on individual elements/characters of the story leading up to where they are now and where they’ll be going, so everyone gets the proper fleshing out and then some. The beautiful and colorful locations seen in flashback sequences are often a far cry from the bleak claustrophobia of the El Royale itself. Even the hotel itself practically becomes a character with its unorthodox arrangement being the subject of many a joke and one-liner. Just when you think you’ve got a story element/character figured out, the film throws another curve ball at you, frustrating you but in the best kind of way. All the character’s stories are a far cry from what you initially expect, with at least one being more than a bit shocking and surprising given the film’s prior events. The movie not only looks great; it holds your attention from start to finish. That’s no easy task with a 140-minute film.

The approach the film takes to its storytelling works surprisingly well, intercutting the individual stories of the characters and their respective pasts. This is the aspect of the film which will probably draw the strongest comparison to Quentin Tarantino, but at no point does it feel like Goddard’s film is directly ripping off his style either. His characters and environments take on a life of their own, and never manage to feel like caricatures or weaker versions of archetypes we’ve seen in other films.

Bad Times is just as good a looking film as it is a sounding one. A delicious retro soundtrack from pop numbers to Motown and psychedelic rock give the place a brilliant period atmosphere it would likely be lacking with the wrong tunes. If you like movies which give you the best music of a bygone era, you’ll definitely want to rush out and purchase the soundtrack when you’re done watching it. Many films waste their “in the past” settings, but Bad Times has plenty of fun with its time period despite being relegated to one primary location in its non-flashback scenes.

Director Drew Goddard and a fantastic cast give audiences everything they could want in a suspense thriller and more. Bad Times is gritty, violent, dramatic, shocking, and above all, just plain fun despite the long run time. You can’t take your eyes off the screen! Absolute highest recommendations; expect to see this one on my “Best of the Year” list.

DISCLAIMER: Images in this film are the property of their respective owners, including 20th Century Fox and Goddard Textiles. For promotional use only. All rights reserved.