In July of 1969, American astronaut Neil Armstrong became the first man to walk on the Moon. The film follows Armstrong throughout the 1960s through many ordeals and personal tragedies as he strives to help America in the Space Race, despite public upheaval and disapproval in turbulent times. Despite numerous obstacles along the way, including being outclassed and beaten by the Soviets in many major accomplishments, and casualties of American astronauts, Armstrong perseveres and becomes an inspiration around the globe.

The Space Race isn’t exactly anything new when it comes to feature films. Movies like The Right Stuff, Apollo 13, and the television miniseries From the Earth to the Moon have already done an excellent job chronicling much of America’s struggles in pursuing space travel despite the risks involved. Even last year’s Hidden Figures did a solid enough job looking at the journey from a completely different angle. First Man isn’t exactly a revelation, nor does it feature a whole lot of material that will be new or surprising to anyone who’s knowledgeable about Armstrong and/or the Space Race. However, its excellently-shot space scenes and the more human approach to Armstrong make it worth seeing nonetheless. 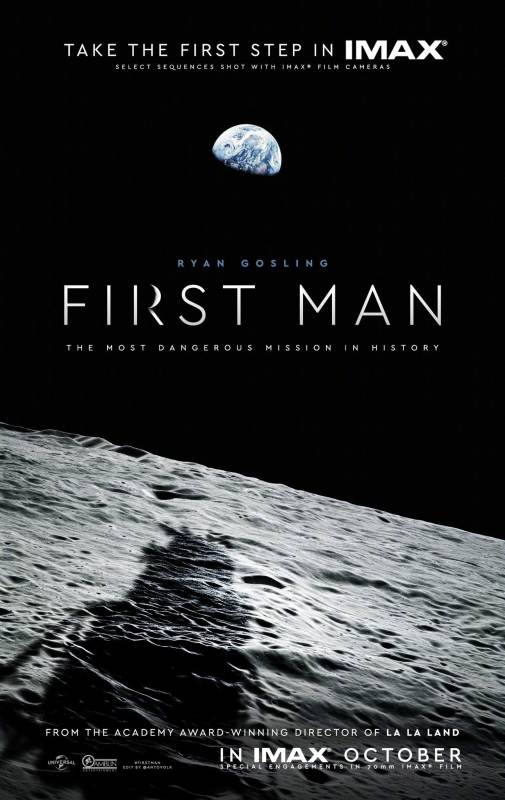 The opening scene of First Man features Armstrong years prior to the Moon landing flying an X-15 so high he’s essentially trapped outside the Earth’s atmosphere and struggles to get back down and make an emergency landing. It’s suspenseful and scary as hell despite the fact you know he’s going to make it back (he’s got to go to the Moon later in the movie, remember?) This scene and the movie’s other scenes in space are shot in a claustrophobic style which beautifully captures what Armstrong was feeling in these moments, and makes them all the more suspenseful. Nothing else in the movie quite comes close to these space/flying sequences, but they grab your attention and don’t let go. I only wish the human drama and interaction with other characters was as good as these scenes.

The film’s casting is well done, though not surprisingly, the primary focus is on Neil Armstrong, played here by Ryan Gosling. It’s difficult to cast an American hero like Armstrong, but Gosling proves himself to be up for the task. Here we see a man willing to risk it all for America in the Space Race, but also one who is troubled by his past tragedies and losses, and who struggles with insecurities. The back-and-forth scenes between him and his wife, portrayed by Claire Foy, are some of the better human interaction sequences the film offers. Gosling, fortunately, has chemistry with everyone in the movie, from his fellow astronaut trainees to those who doubt the space program. If there’s one major issue with this aspect of the film, it’s that everyone feels like a side player next to Gosling’s Armstrong. Many other heroes of the space program are portrayed here, but we’re hit with so many people so fast it’s difficult to know who’s who, and the movie quickly becomes overwhelming in this regard.

The movie does well in recreating the look of its time, though it doesn’t capture the social atmosphere of the times as well as it should, aside from some brief footage of a civil rights rally and protestors burning draft cards on TV. These sequences feel like afterthoughts which were thrown in at the last minute, and don’t flow or fit as seamlessly into the movie as they should. That said, I am impressed the film didn't shy away from public disapproval of the space program and how they believed funds could be used better elsewhere. On the other hand, certain aspects of the production feel rushed, including the ending, which frustratingly lacks a worded epilogue describing Armstrong’s life after the events of the film. Fortunately, the good still outweighs the bad, and the Moon landing sequence doesn’t disappoint nor does it feel artificial.

I’ve been largely critical on First Man in this review, but it’s actually a very good film which brings Neil Armstrong’s personal legacy to life. Condensing about ten years of his life into a single film with countless supporting players is a daunting task, but the movie is still a solid experience despite its shortcomings. Is it the greatest movie or program ever made on the space race? Certainly not. But there’s more than enough here to recommend it.

DISCLAIMER: Images in this review are the property of their respective copyright holders, including Universal Pictures, Amblin Entertainment, DreamWorks Pictures, Temple Hill Entertainment, and Phantasma. For promotional use only. All rights reserved.

Beyond the Beats - Interviews with Rock ...