Home›Movie Reviews›Happy Death Day 2U: The Time Loop is Back!

Happy Death Day 2U: The Time Loop is Back!

Happy Death Day 2U (hereafter simply referred to as “2U”) is directed by Christopher B. Landon, and stars Jessica Rothe, Israel Boussard, Phi Vu, Suraj Sharma, Sarah Yarkin, and Ruby Modine. It’s the sequel to the 2017 film Happy Death Day.

Note that this review will contain some spoilers for the first film, so if you haven’t seen the original, you may want to see it before you read this review.

Following the events of the first Happy Death Day film, teen Tree Gelbman reawakens and has escaped from the time loop she found herself trapped in, looking forward to a future alongside Carter, the kindly frat boy whose room she woke up in before. But due to some unexpected experiments going on at the college campus conducted by science students, Tree finds herself thrown back into the time loop, albeit with some serious and startling differences. As the destructive loop and deaths continue and her friends do the research to close the loop, she will be faced with a difficult decision regarding her impending future. 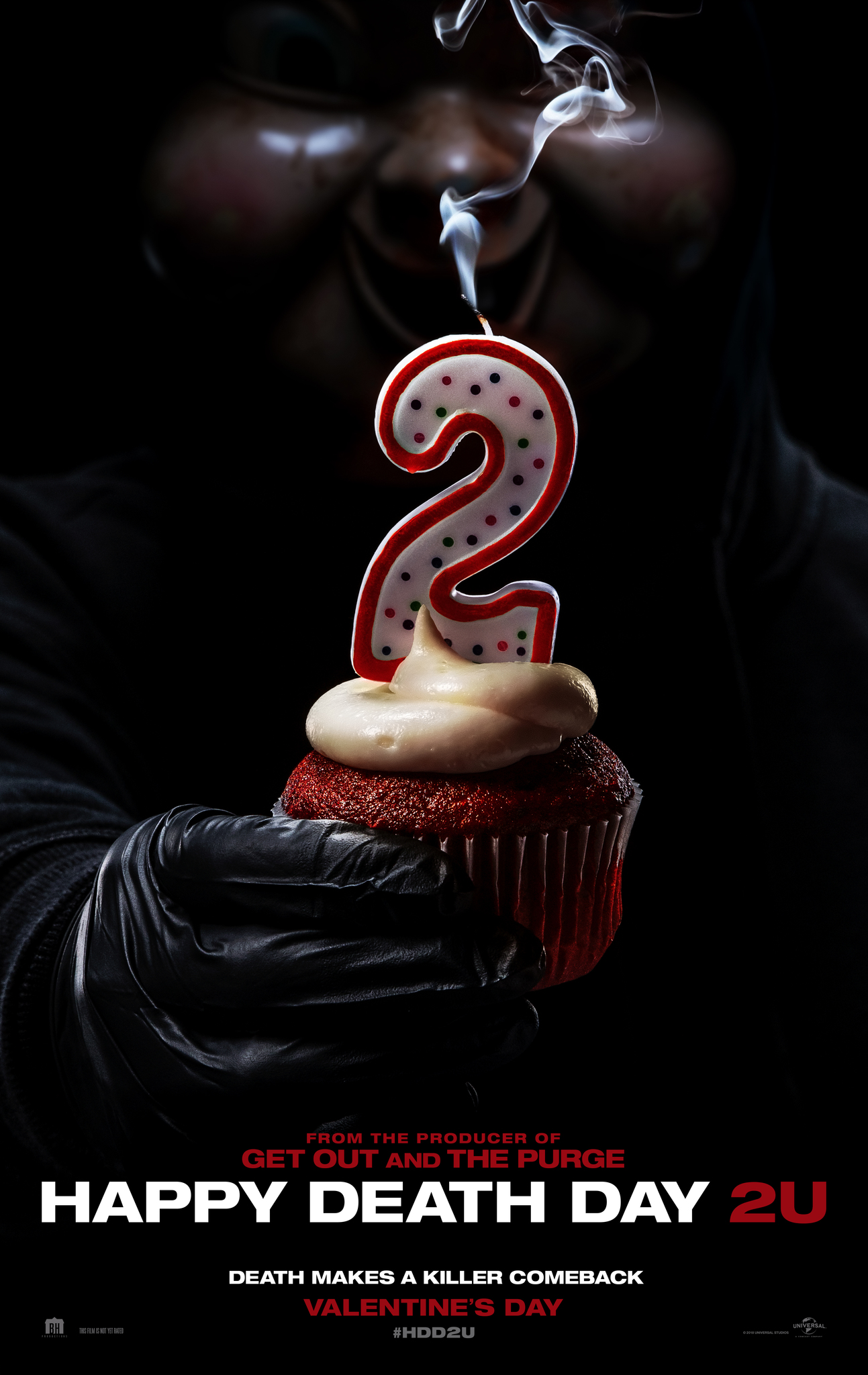 The first Happy Death Day was a surprise hit from Blumhouse and director Christopher B. Landon. I reviewed it at the time of release, and while I was a bit harsh in my initial review due to the tonal inconsistencies, I’ve definitely warmed up to it in the year and a half since its release. It seemed inevitable a sequel would eventually come, and now we’ve got it. This could have been a lame retread of a tired premise, but the cast and crew actually manage to keep things pretty interesting, scary, and perhaps most importantly, pretty damn funny. The cast is fantastic and the laughs are endless despite the film’s murderous content. At times the writing is a bit shoddy and difficult to follow, but I’d be hard-pressed to find a movie involving time travel I couldn’t say that about.

By far the standout player in the original Happy Death Day was its heroine Tree Gelbman, who made a transformation from unsympathetic bitch to someone we found ourselves rooting for; no easy transformation to undergo in a film which has a running time of under 100 minutes. Jessica Rothe is back reprising the role, and as funny and entertaining as ever, be it in a death scene, a witty one-liner, or the more dramatic content, even if the film does somewhat share its predecessor’s weakness for getting bogged down in melodrama a few too many times.

One of the biggest advantages 2U has over its predecessor is its expanded cast. In the original movie, Tree was the primary focus, with Carter having something of a secondary role and everyone else feeling tertiary. 2U boosts the roles of its supporting players, including in its introductory scene which follows a fellow student through the predicament Tree previously found herself in. The fellow students keep the laugh’s coming faster than a killer’s knife, and the movie even expands on Tree’s relationship with her family, something the first film only hinted at.

Perhaps the greatest strength of 2U is its comedic content. The writers here have a knack for hilarious dialogue and several sequences which are laugh-out-loud funny, yet they blend together well with the film’s overall premise without feeling out of place. One sequence, requiring a distraction to help our heroes and the means by which they carry it out, will definitely be on my list of funniest movie sequences of the year. A comedy needs to be funny. And Happy Death Day 2U assuredly is.

While I would say the film is, overall, stronger than its predecessor, it does still suffer in a few areas. I give the movie credit for setting its tone early on and keeping the laughs coming, but in terms of the actual storytelling, there are a few plot holes and inconsistencies, including the ignoring of a plot point from the original movie regarding Tree’s physical condition following her deaths… and this is suddenly brought back later in the film, creating further confusion! I won’t go into too many details here, but you’re bound to nitpick a few things despite it being a good product overall.

DISCLAIMER: Images in this review are the property of their respective copyright holders, including Universal and Blumhouse. For promotional use only. All rights reserved.