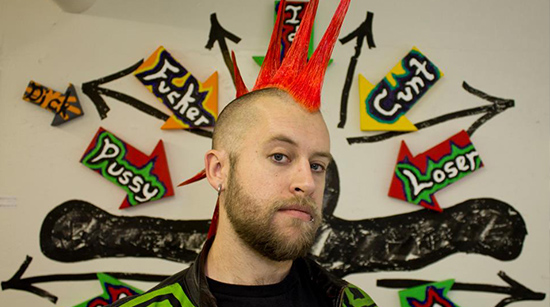 Music and Visual Arts are the fraternal twins of our cultural social structure.  They are the hand-holders until way beyond “appropriate” age.  They speak a language only they can ever truly understand.  They share a look and one, instantly and instinctively, knows what the other is communicating.  Enter, Bodlar Deathbringer.  An artist who believes formal study squelches the very purpose of art, “Art is about life, feeling and expression.”  With a personal style that screams “disrespectful punk”, a “dirty hippie” twinkle of the eye and that “artist-struggling-to-find-himself” charisma, the rest of us get a glimpse of what goes on within such a preternatural relationship.

Lu Frith: What is the most common reaction to your work?

BODLAR: It’s pretty varied. But, I’d say more often than not it’s “Awesome.”  I do get a lot of negative attention for my work with words and vulgarity.  You’d think by now we’d be able to move past that as a society, but words are just as much of an issue as they have ever been.  Some of my work has been censored and put down as “disgusting”.  I want to change that. 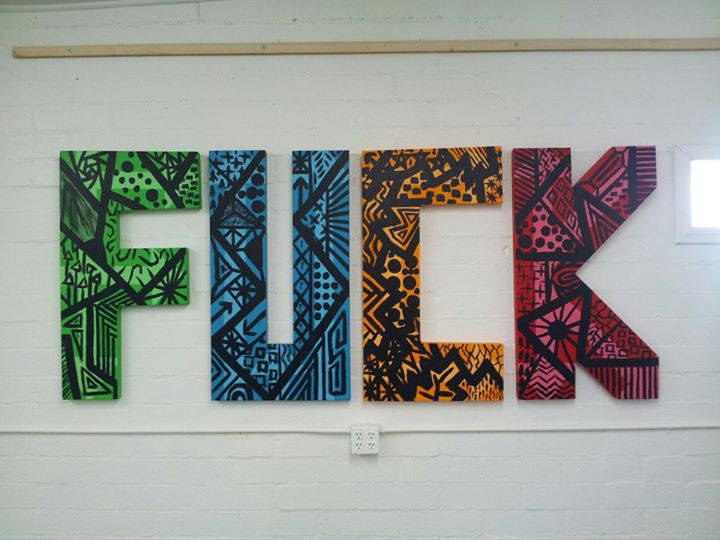 Lu: Do you listen to music while you work? If so, what are some of your favourite sounds?

BODLAR: I have music on from the moment I wake up until the moment I go to sleep.  Music is an integral part of my life and my working process.  My musical tastes vary, wildly.  A few of the things I listen to are: hardcore Industrial/EBM, old school Bebop era Jazz, Goth, Rap (though I’m picky about rap), Classical, EDM/Dubstep, New Wave, Classic Rock, the list goes on and on.  The only genre I can almost entirely rule out is Country.  Though, most of my playlists on Spotify are of a single artist or group I’m listening to at the time.  I grew up playing trumpet pretty seriously so music goes very deep for me. 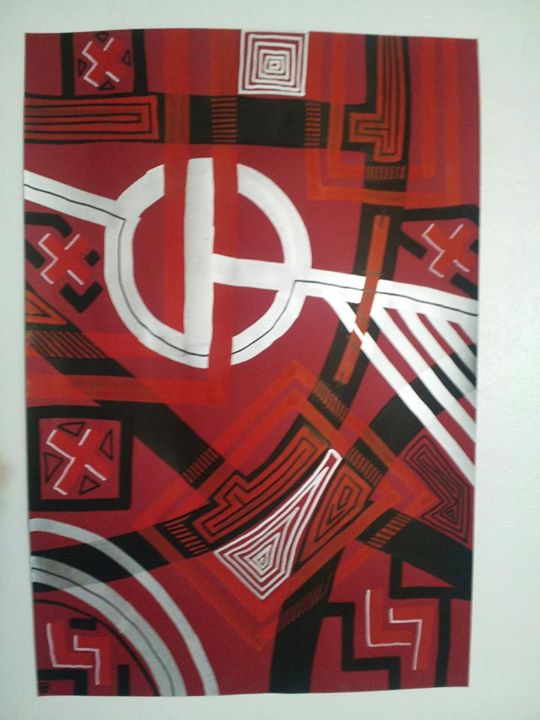 Lu:Are there any colours/shapes you are more attracted to, than others?

BODLAR: Color-wise I use a lot of tertiary colors in my work. In particular, yellow-green and yellow-orange.  There’s something about those colors that drives me nuts.  I match my life to color phases I’m going through.  I’ve used bright green for the last few years to motivate me.  It’s a very energetic color that really just makes me think “GO!”  As I’ve come into my own, as a full-time artist, bright orange has been really speaking to me.  It symbolizes that I’ve found that thing to BURN for.  Shape-wise, I really love anything geometric.  But, I’ve got a real soft spot for a regular square, canted at a 45-degree angle.  I have several pieces that use that shape as the basis.  People want to call it a diamond but, that’s incorrect.  I think I love it because it’s just a square but, by turning it slightly, it looks like so much more than that.  Complex simplicity. 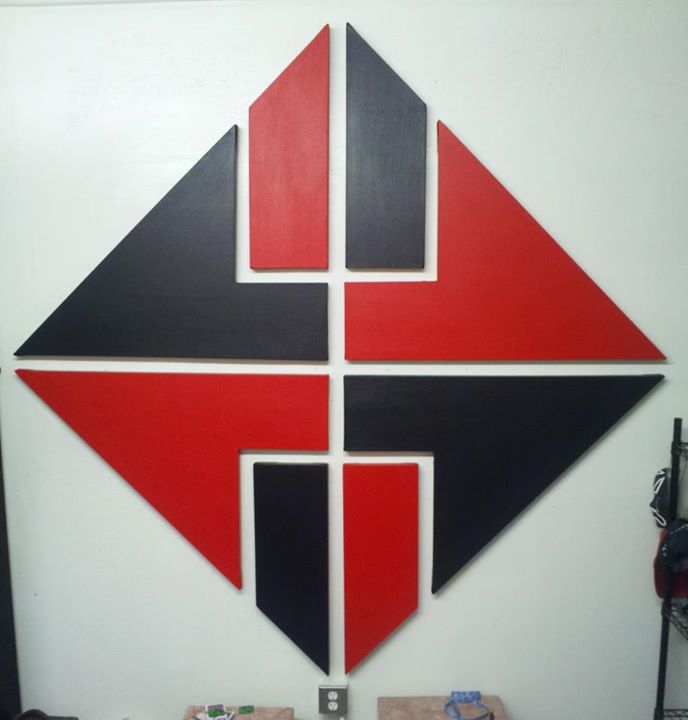 Lu:Do you consider your use of shaped canvases a signature?

BODLAR:Absolutely.  There have been very few artists to tackle the idea of canvas shapes in any format.  I have managed to take it even further than those before me.  My pieces are incredibly complex and extremely precise.  I’m working at a level of precision of 1/16th inches and half a degree of rotation on my miter saw. 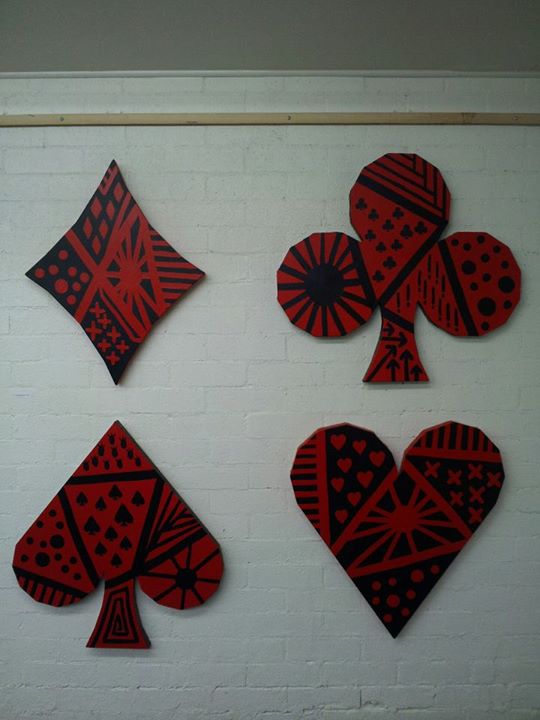 Lu: The concept of self-exploration is practically synonymous with artistic expression. What of Bodlar are we seeing in your works?

BODLAR: I am my work and my work is me, for sure.  I spent a large portion of my life bottling things up and hiding from my demons. I’ve made sure to never do that again.  Not since 2008, after having ended a particularly toxic relationship I’d put myself in. I have a lot of anger about a lot of things.  I’ve been letting it all out since then and the more I do it, the more I find I have to express.  The other side of that is my desire to find complex simplicity.  My “This Way” series in particular explores that avenue.  I love luring someone into a piece with something easy and then the trap snaps shut, “Gotcha!” it’s actually much more complicated than you thought at first glance and now you’re fucking stuck.  Now, you’re FEELING something. 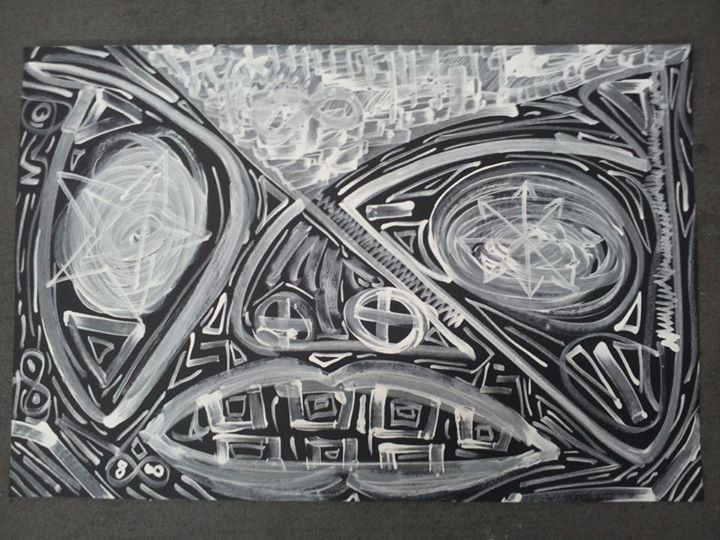 Lu: What is your motivation behind inviting others to name your pieces?

BODLAR: I was really frustrated with a piece a little while back and couldn’t come up with a name for it.  It was this piece actually: 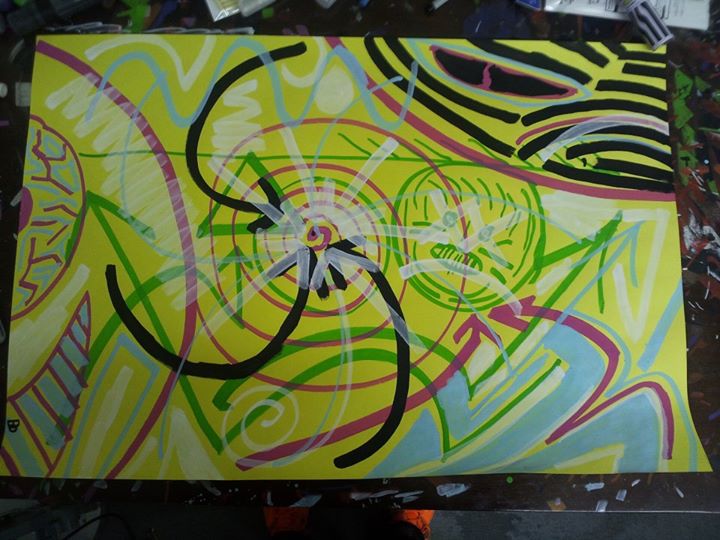 I really love the way the piece turned out but, I was drawing a blank on the name.  I posted on my Facebook page that I wanted my followers to name the piece. The response was incredible.  All of the sudden, I had people taking an active interest in the piece because they got to be part of the process. And, it provides a great platform for discussion.  The rule is: whoever actually buys the piece gets to give it it’s permanent name.  This only applies to my paper and glass paintings, however.  I still name my large canvas pieces since I pour so much fucking time and effort into them.

Lu: Would you call yourself a “deconstructionist”?

BODLAR: No, not at all.  I want to change society and many of it’s elements but, I don’t really feel the need to tear things down.  My minimalist works are designed to evoke an emotional response.  Any time I get a reaction to my work I’m satisfied, whether it’s good or bad.  I want to make the viewer FEEL. 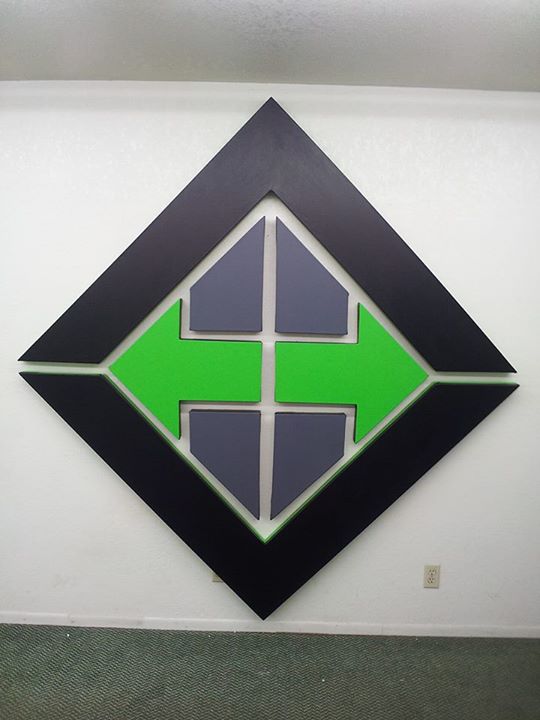 Lu: Some of your pieces are HUGE… Does size matter?

BODLAR: It is very important to my work, especially my canvas pieces.  I’ve found I really love my paintings that are human-size or larger.  The ability to walk into a piece changes the dynamic drastically.  I feel it makes it more interesting and engaging for the viewer.  As I move forward, my desire is to only work in the 6 ft. plus range of canvas pieces. 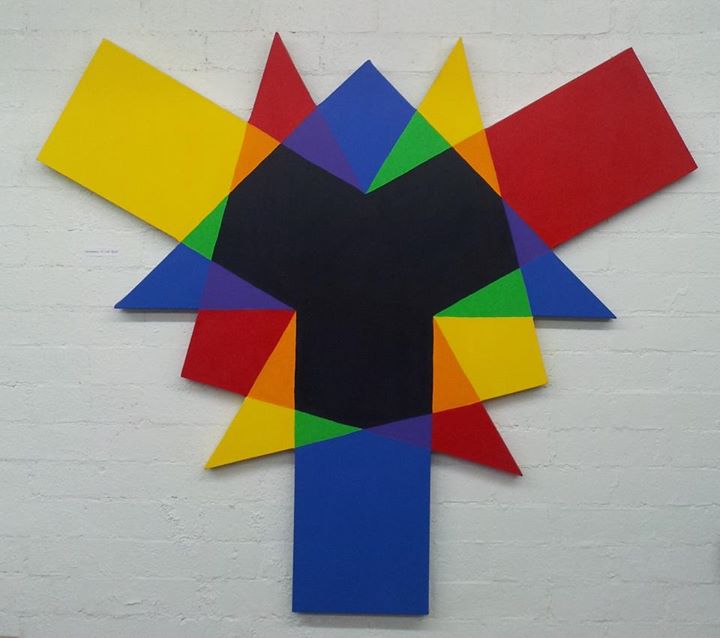 BODLAR: It’s really weird.  Mostly, because those pieces, once finalized, will be in light boxes lit from behind.  It also means I have to paint everything backwards because the glass gets turned around for viewing to give the piece a hyper-glossy look and feel.

Lu: How big of a part does the fact that a piece is commissioned play in your creative process?

BODLAR:I try to maintain as much creative control as I can when it comes to commissions.  I work with the buyer to find a piece or pieces that I’ve done and try to do something similar.  But, the less the buyer defines, the better the piece turns out. 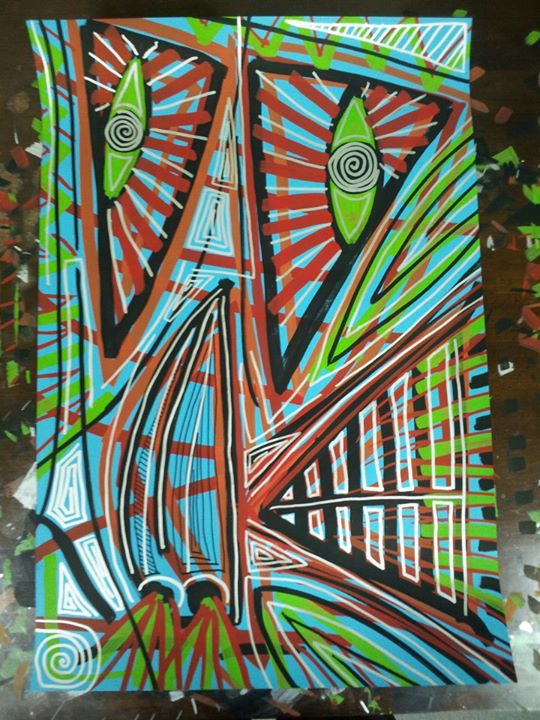 Lu: Who are some of your favourite artists?

BODLAR: I’m a huge fan of Mark Rothko.  Gian Bernini, Franz Kline, Frank Stella, and Lee Krasner are some of my other favorites.

What are some of your “oddest” influences? Past lives and psychedelic substances… I don’t really care to elaborate much more on either of those, right now. 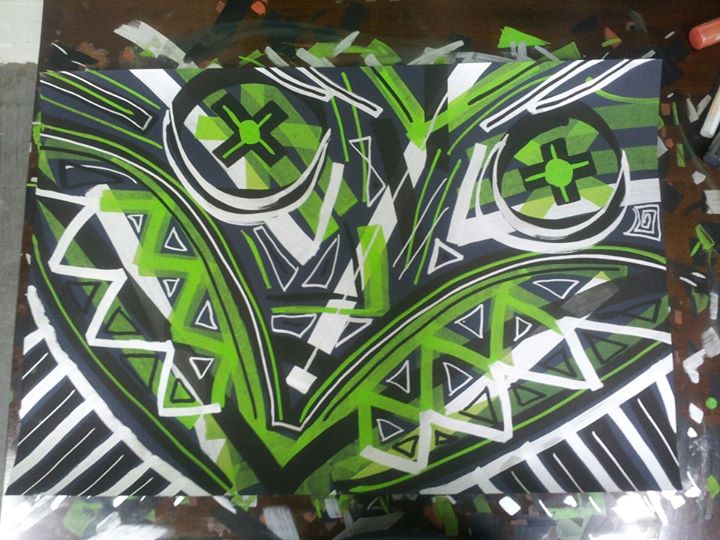 Lu:You’ve mentioned working with a “muse”. How does that work?

BODLAR:  I believe that we are the sum of the people we associate with most.  Their emotions and energies affect us strongly.  I’ve derived muses from both positive and negative places.  Different people provoke different emotions in me that when strong enough, in any direction, make me want to express myself more.  I prefer lots of stimuli in my life.  That comes in many forms. 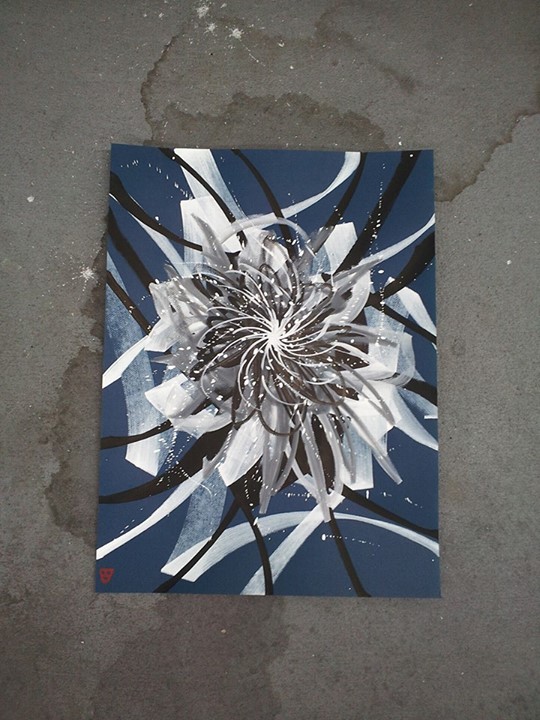 Lu: What’s so appealing about the word “Fuck”?

BODLAR:It’s the most versatile word in the English language.  It’s also Fucking awesome!  See, I went meta-fuck there.  I think it’s particularly entertaining because there is still this massive swath of society that is uncomfortable with it.  I’ve been kicked out of places for wearing the jacket I painted that says “Fuck You” on the back of it.  I just laugh when that happens. 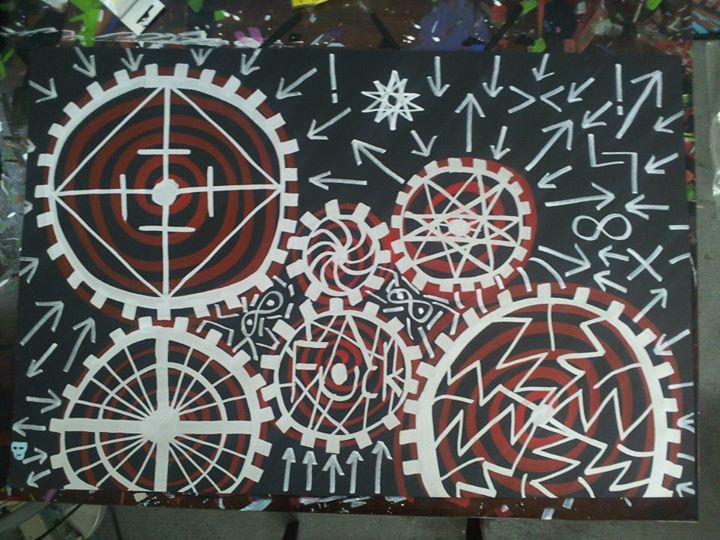 Lu: Can you explain your consistent use of the arrow?

BODLAR: We are surrounded by directives in our world.  From the use of traffic signs to emotional and familial pressures.  We are always given a “direction” to go in.  Often, it’s in the opposite direction you may want to actually go.  This is where a lot of my anti-censorship shit comes up.  It breaks my fucking heart to see people doing things for the wrong reasons.  Especially when it’s due to the most nefarious of pressures, the familial variety.  Fuck your blood, don’t let anyone run your life but you!  I like them (arrows) for all those reasons. Plus, they are just awesome, thematically.  I can do a lot with the “motion” of a piece, even though it’s static. 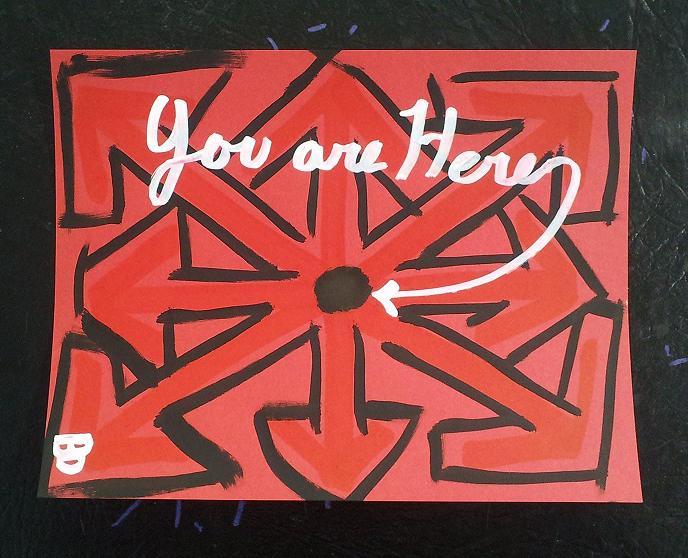 Lu: What question do you wish people would ask about your work and what would the answer be?

BODLAR: Fuck, that’s a hard question.  How about “How often do you paint?”  The answer is a fuckload!  I treat my work like a full time job and then some. I paint at least 60 hours a week but, I always shoot for more.  It usually ends up being more like 80.

For Sales Inquiries or to Commission your own piece, please contact the artist at:  [email protected] or call (702) 249-3282

Slashing Up The House of Blues