Home›Interviews›Do You Want To Play A Game? Playtime With Scorch!

Do You Want To Play A Game? Playtime With Scorch! 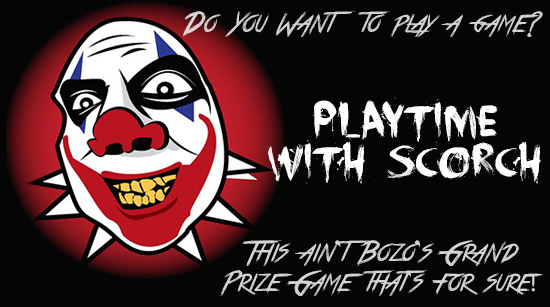 The   American  fascination  with  game  shows  can  be  traced  back  to  the  very  inception  of  broadcast  television  into  our  households.  Those  popular  radio  quiz  shows  were  eagerly  transformed  into  easily  digestible  television  fare.  Nearly  every  child  of  the  “Golden  Age  of  Television”  has  memories  of  families  gathered  around  that  warm  glow  and  tuning  in  to  primetime  quiz  shows  or  their  parents  watching  their  favourite  panel  game  show.

Quiz  show  scandals,  the  inclusion  of  in-house  celebrities,  the  growing  popularity  of  game  show  hosts,  and  the ever  increasing  prize  values  have  given  the  game  show  a  basis  of  evolution  that  continues  to  this  very  day.  The  growth  in  popularity  of  the  reality  competition  show  is  a  network  ratings  wet  dream.  But,  the  proliferation  of  reality  competition  shows  has  created  a  game  show  void.  The  traditional,  low-budget,  audience  participation programs are  few  and  far  between.  Luckily,  Playtime  With  Scorch  has  arrived  to  save  the  day! 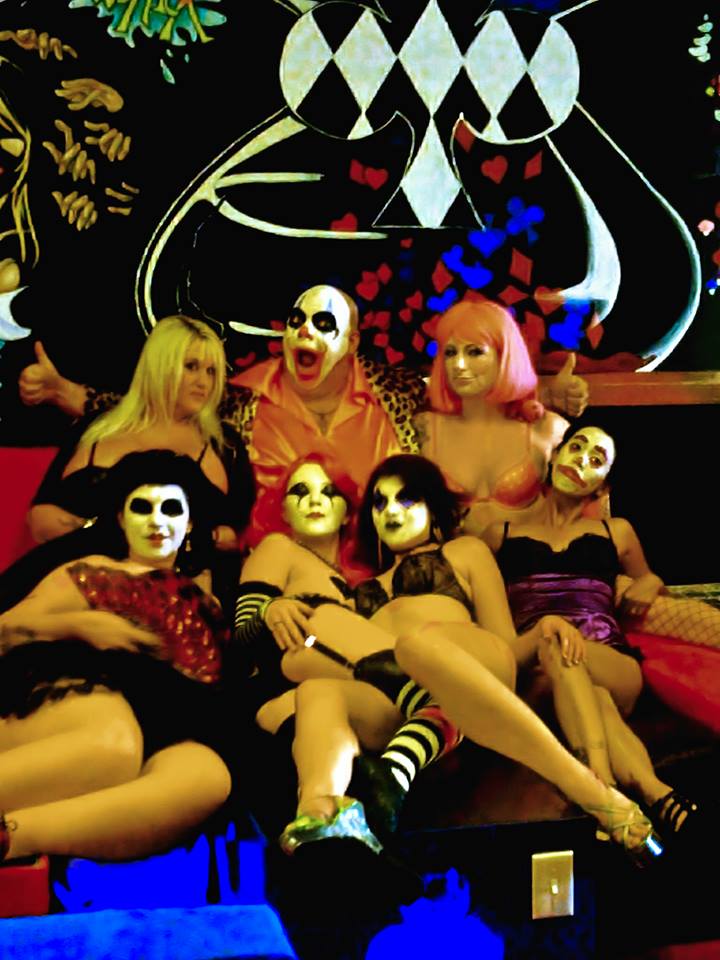 Scorch has been extremely busy with the game show and all the other mayhem he stirs up around town- with the Dinner with Scorch (served at Cariba Charlie's- 4835 S Rainbow Las Vegas once a month on a Sunday afternoon) at Freakshow Wrestling, Punk Rock Bingo- and though Halloween may seem like an eon away,  even that is under consideration.  Scorch ( and when he lets him out,  Warren) is really a very busy clown, er man, er evil clown, er... you get the gist-  the list goes on and on but the thing right now he is busiest with is his show, Playtime With Scorch.  We got to sit down with good ol’ Scorch to find out how he came to be, how this show came to be, and what we can expect in the future.

ZR: So, how did Scorch come into existence?

Scorch: I used to dress up as this clown that was named Syphilis, and although he was pretty wicked, there came a time when he just wasn’t around. When auditioning for Freakling Bros. Haunted Houses, I broke out the clown makeup and out came Scorch. 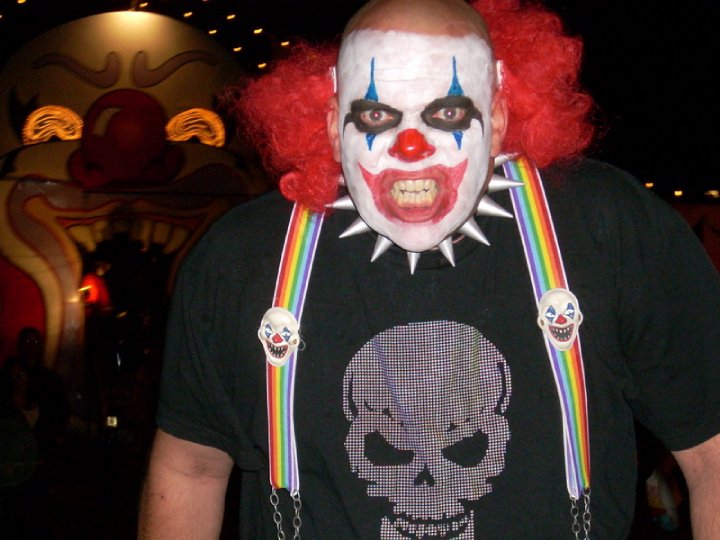 ZR: How was your audition for Freakling Bros.?

Scorch: (with a chuckle) I auditioned twice. The first time, I went in as Warren. I was respectful, humble, explained why I was qualified, all the good stuff. When I walked out of my audition, I knew I did not have the gig. I decided to go back as Scorch. I went in, fully done up in my costume, and I actually did my application in crayon with letters written backwards and such. I was rude, I was disgusting, I was wicked, and I was threatening. They seemed a little concerned about the risks of a fire breathing clown, but I got the gig, and although sometimes Scorch gets in trouble, every year is great fun.

ZR: How did you get into breathing fire? 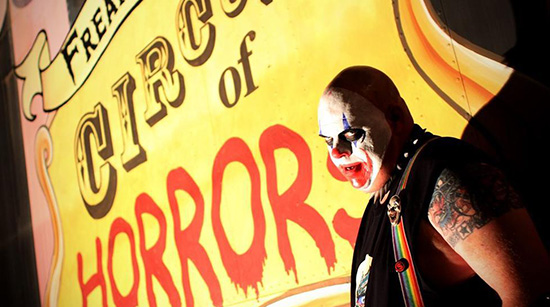 Scorch: I grew up as a huge KISS, and Gene Simmons** fan. I had met this guy who breathed fire when I was about 12, and I begged him to teach me. After annoying the dude enough, he told me if I could raise up like, 200 bucks, which was a lot of money back then, he would give me lessons. I was a KID. So, he thought he had outsmarted me. Well, I started taking up mowing lawns and such, saved up the money, and bussed it to this guy up at Circus Circus clear from Boulder Hwy.  Shocked, he called me mother and asked for her permission. Of course she said no, but that didn’t stop me ( Scorch's Mom finally relented because both she and the firebreather thought he would give up when he realized how hot and dangerous it was- he didn't) . So, we go forward with the lessons, and the first time I was about to breathe the fire, he shows me and tells me what to do, and he says to me “You will catch fire your first time, it happens to everyone.”  So, I did my thing, and he was ready to douse me in water, and instead he was just standing there in shock. I had blown fire for the first time, and I had not caught fire.  Since then I just keep in practice. I of course perform at Freakling Bros. Circus of Horrors and also do weddings and shit like that. Scorch is a beloved character.

ZR: So, how did you come up with the idea for Playtime with Scorch?

Scorch: As a kid I watched Bozo’s Circus, and the games were always so easy, and it was always cool prizes. BUT there was always that idiot kid who couldn’t win the easiest fucking game, and it would make me so mad because these were SIMPLE games. So, I got to thinking, let’s do a game like Double Dare, where people go up against each other doing awesome activities. If they lose though, let’s punish them. Hence the Double Dare meets Saw description. Winners win, and losers get punished, but everyone has a great time tuning in. We have many awesome supporters of this, and I am excited to see what happens with it.

There you have it, folks! A sit down with the most metal clown in Vegas, and quite possibly the most metal clown on the West Coast. ZRockR is very proud to support Scorch, and we hope you will tune in to the show by participating in a taping at Joker of Clubs Hookah Lounge (3555 South Ft. Apache in Las Vegas) – next taping is on August 18 at 7:30pm PST-  or-  If you can’t make that then definitely tune in to YouTube by going to http://www.youtube.com/playtimewithscorch !

If you want a Playtime with Scorch shirt ( only 20 bucks plus shipping, comes in all sizes up to 2 or 3x if we remember correctly and has the logo with Scorch's face on it! Get it! ) or if you want to look for more updates or send a message to Scorch you can do so by going to http://www.facebook.com/playtimewithscorch , and don’t forget to look for more updates about the show from all of us here at ZRockR! 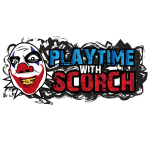 *** It should be noted that die hard KISS fan Scorch has indeed met Gene Simmons!  Scorch had called into KOMP when Gene and Paul were there taking calls from fans and it was Gene who actually took care of Scorch and his family at the KISS Convention at the Sahara Hotel upon finding out Scorch was a new Dad and as such had to give up his chance to go due to being a good dad and making sure the baby had all the baby things needed which didn't leave money for a ticket!  Gene and Paul were most accommodating and wonderful we understand***   ~Editor