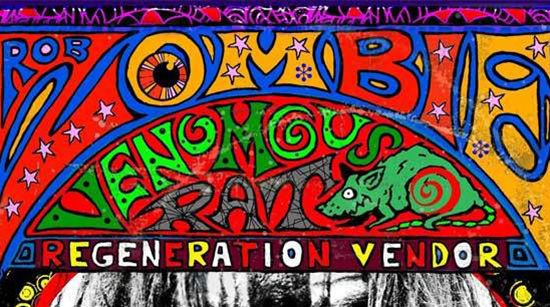 12 songs that take everything Rob Zombie has ever done; blended with a very solid all-star line up ( John 5, Ginger Fish, and Piggy D... all well known "shock rockers")... and what we've received is, in many opinions, his most complete sounding effort since The Sinister Urge. I guess you can say it's the most " Rob Zombie" sounding since then. While Educated Horses and Hellbilly Deluxe 2 both had plenty of gems on them; both fell just a little flat of expectation. Revelation Revolution reminds me of a cross between Dragula and Feel So Numb. Certainly a favorite of mine. Rock and Roll (In a Black Hole) permeates your inner rock 'n' roll being with the kind of vibe where you must bob your head, tap your feet, and if you're driving... beat the crap out of your steering wheel as you are quite obviously the drummer yourself. I'm excited about the more up-tempo pure jam songs like Behold! The Pretty Filthy Creatures and Lucifer Rising because honestly - there never seems to be enough of those since the White Zombie days. The cover of We're An American Band (originally by Grandfunk Railroad ), while not completely necessary, definitely isn't a bad one and is one of his better cover songs. True to the original; just done by Rob Zombie. What I like most about the track is the use of Rob's deeper more metal voice; something he also doesn't do very often anymore. The opener Teenage Nosferatu Pussy is a slower chugger of a tune that I feel the verses are far more hooky than the chorus (tell me you didn't know the words the 2nd time you heard it). Dead City Radio and the New Gods of Supertown... most likely the best 'single' that he's produced since atleast  Never Gonna Stop Me. I hear a perfect blend of Marilyn Manson's more radio-friendly tunes mixed with Rob Zombie's most catchy songs for it. Not musically, but vibe wise, it has more of a fun groove similar to Thunder Kiss '65. And hey. We all like groove, right? There's plenty of 'twang' throughout the album, and the only way to really get that is by listening to it. Not every song is an absolute winner, but overall, nothing is terrible and this album has pleased me the most in 12 years. I always look forward to new Rob Zombie for so many reasons. Hellbilly Deluxewill probably forever stand as his pinnacle of solo work, however; if he can crank out a couple more with this type of quality. No complaints here.