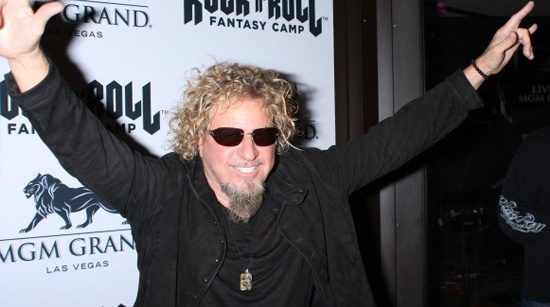 OK, first and foremost, full disclosure.. I am a huge Sammy Hagar fan. Now that’s out of the way, let me tell you there is loads to like on Sammy’s latest album “Sammy and Friends”. There is also a few tunes that will probably be topics of discussion, for better or worse.

Sammy has some of the coolest friends. These friends range from Kid Rock and Nancy Wilson to Ronnie Dunn and Neal Schon. These and scores of others contribute to some great new songs, some good new songs, and good, but probably, controversial covers.

One of the best tracks on the album are “Knockdown Dragout” with Sammy and Kid Rock sharing vocal duties, with the Waboritas and Joe Satriani rounding out the band for this song.

A few other tracks that shouldn’t be missed are “ Bad on Fords and Chevrolets With Ronnie Dunn, and “All We Need is an Island” with Sammy and Nancy Wilson on vocals, and Mickey Hart of the Grateful Dead on drums. Also check out the “down” tracks “Winding Down”, “Not Going Down”, and my favorite of the three, “Going Down”. All are really good tracks.

Now onto the songs that are sure to have some people asking, “What was he thinking??”

First of the two tracks under this category is “Personal Jesus” originally done by Depeche Mode. Personally, I like what he did with it, gave it a blues-y feel with gospel-like backing vocals. I can see with this song, that Depeche Mode fans will be up in arms, but definitely give it a solid listen, and you may just like it as well!

The second track is the Jimmy Buffet song, “Margaritaville”. Sammy and Toby Keith share the vocals on this one. To be honest, I love the original version, and this one was just one of those “OK” tracks. It wasn’t bad by any means, it just didn’t have the same vibe that the Jimmy Buffet version had.

One thing that is consistent thru the album is that any song that Michael Anthony plays on, you can tell almost immediately. The growl that that man can get out of a bass guitar is still the stuff of legend. All in all, I would recommend this album to pretty much everyone. The good far outweighs any of the filler on this album, and throughout it you can tell he had a genuine good time make this with his friends.