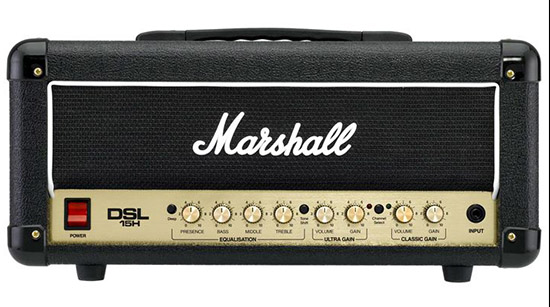 I’ve seen and heard a lot of guitarists moving to mini amp heads that are generally around 15 watts, small, and very easy to move. At first glance they look a tad weak standing next to a giant wall of Marshall. Being fair, you’ve got to try it before you knock it, so this month I decided to try out Marshall’s DSL15 Head. Based on the immensely popular JCM2000 DSL model, you’ll see many familiar features, namely the tone shift and deep boost.

The main difference? It’s only 15 watts and you can even drop it in half if you wanted to. Great for playing in the bedroom, right? The answer would be yes of course, but, how would such a small amp deliver in the booth or on stage? The answer to that would be very well. I underestimated this small box, and had the volume up when I turned it on. That didn’t last very long as it absolutely screamed through the 4x12 combo it was paired with. Dropping the volume, I dialed in a decent “bedroom” volume: The tone was incredible. It didn’t suffer from the typical drawbacks of having a 100 watt powerhouse on half of the first volume notch. The sound was punchy yet clear, forceful and warm yet very articulate.

Increasing the volume I was able to get a snarling growl characteristic of classic Marshall and it was very loud. In any situation I see absolutely no drawbacks to using this amp. With a mic in front of it, it will sear in the studio and on stage. For smaller venues that go off of the stage volume it will still deliver. 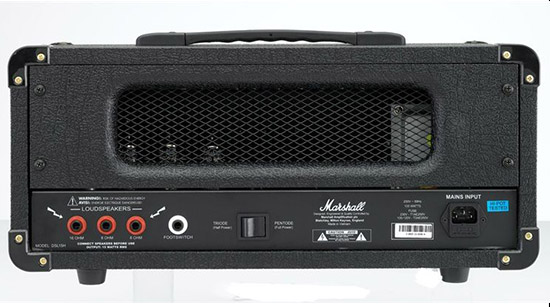 With 3 ECC83 tubes the preamp of this little beast has a good range of sounds. The EQ was very reactive and really changed the dynamics of the sound. What impressed me the most were the gain characteristics, though. At a very low setting the amp provided a very light crunchy tone that would be great for any kind of dirty blues sound. As you turn the gain knob up it transforms very quickly, almost a little too much. At around the third and fourth notch I was getting tones very good for most heavy metal sounds. A lot of chug and crunch without mud. At 6 and up, I found it lost a bit of clarity but that’s only my taste - Some people really like that oversaturated gain tone and for that, this amp still delivers for a wide variety of sounds.

Two 6V6 tubes and one more ECC83 power the DSL15. It can run one 16 ohm or two 8 ohm cabs, and it comes with a footswitch to go between the clean and drive channels. It doesn’t come with reverb or an effects loop. The clean channel felt a little thin even with the gain maxed on it. The channel is just that - Clean. You can get a slight crunch out of it, but not quite the typical “Clean” we’ve come to expect from a Marshall. The drive channel is where this amp really shines.

The tone shift button is an instant Mid scoop on the EQ. It drops the midrange out of the sound and really, that’s where the guitar shines. It makes the sound pretty heavy, but it definitely loses some character. There’s also a Deep button that adds a boost to the bottom end, beefing up the sound.

For around $500 it’s hard to find an all-valve amplifier let alone one that sounds this good. If it were more expensive I’d probably rate it lower by comparison to other amps, however, between the quality and the price, I’m going to give this one a 4 out of 5 overall.