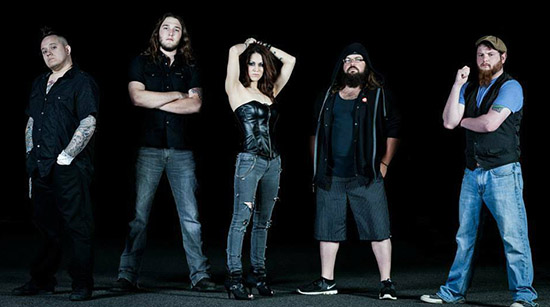 Where is Downfall Rising from?

We are from Lufkin, TX and I am from Lake Charles, La.

How long have you been a band?

Well, Tyler, Stephen and Greg have been in DFR (downfall rising) since july 2009, Aaron joined a bit after that and I came in as their new singer june of 2012.

How do you describe your music to new listeners?

It's a mixture of all of our influences and what we feel while we are in the moment creating the songs. It's heavy rock/ metal/ melodic, etc... its Downfall Rising!

Who are some of Downfall Rising musical influences?

We all have to say Deftones, Sevendust, um...Seasame Street haha ... no, but seriously, we have such a wide variety of influences. Makes us bring to the table our own individuality. Too many to write! but I'd add in Disturbed and Revis for me personally as well.

How many CDs/EPs do you have? We'll, we released our first and only EP March of 2013. We are about to get back into the studio and record our new album which we are all excited about!

What is your most favorite or most popular song DFR has came out with? Everyone has their own choice I guess, but personally, I think "survival" our new song that will be on our upcoming album is my favorite. "dosage" on our EP has become a new favorite of mine simply because I think I'm rediscovering it all over again. The meaning of it is hitting home for me these days. The most popular song we've done in my opinion has got to be "machine" even though "misery" was very well recieved because that was our first song released since I had joined the band.

What's your favorite song's meaning? "Survival" I wrote after a break up and without going into the details for the sake of my privacy and the person I was with, it simply explains how it feels to be without the other. Feeling like when that person leaves, it's as if it is the death of yourself. The lyrics are pretty much explainatory. "dosage" is about how you are surrounded by enemies and needing something more than what is of this world. I directly was singing this song to god. How it is from the struggles of the deepest, darkest depression. Needing to be saved and awaken.

Is DFR a signed band? We are currently unsigned but we feel as though we could be getting closer to being on the next level, the next step forward, whatever that may be.

Who are some of your favorite local bands? I really enjoy Saturate, Soul in Tension, a new upcoming band that is unique called Oh, Rhien (from Louisiana). Big things lie in the future for them. I believe it! ... Several other bands but I hate to mention only a couple and not the others, I have a ton of friends in bands and it kills me that I can't list them all! They know I love them though!! haha 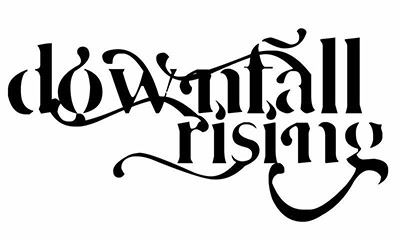 What national acts have DFR played with? Huge honor to have played with Saliva, Red, Flyleaf, Machina, Otherwise, We as Human, Parabelle, Powerman 5000, Boy Hits Car, ..thats all I can remember at this moment. I'm sure there are more! haha

What cities have DFR played in? From the big cities like Dallas, Austin, Houston, San Antonio.... To the little cities and towns throughout Texas and Louisiana. soon to be all over the U.S.

Have DFR been on any tours? Yes! We just got off our first tour with Saliva in the beginning of Nov.

Has DFR played in Dfw? If so where and with who? Before I joined the band, DFR played in Dallas. They played Trees and other venues with a great amount of bands from all over the area there. Also, we just got off tour with Saliva and we actually played at Tomcats in Fort Worth with a few bands that night who were amazing!

What has been the best show for DFR so far? It's a tie for me. I have to say when we were just on tour with Saliva, we played in Odessa at The Graham's Central Station. We were around 8 hrs late due to our van breaking down in Beaumont, Tx after our halloween show there the night before. When we finally showed up, Saliva's road crew AND band members unloaded and helped set up our gear and we hit the stage within 20 mins of arriving. Had an amazing show! Also, when we opened up for Flyleaf a couple of weeks ago. It's was a beautiful feeling experiencing such an intense crowd there with us and when we hit the stage, the entire vibe of the crowd and us band members playing our hearts out.... It was incredible. I can barely describe it with words. Everything just lined up and it felt like we were where we needed to be in our lives. It was amazing!

What has been the most craziest moment/story on tour? Or at a show? The Odessa show on tour with Saliva. hands down. It was a day we all had to depend on each other for help and making a way for things to get resolved and fixed to get us all the way from Beaumont to Odessa by that night. Great memories though. It was hard though that moment in time, but a great feeling knowing it was all worth it in the end ...and the fans made it even better!!! 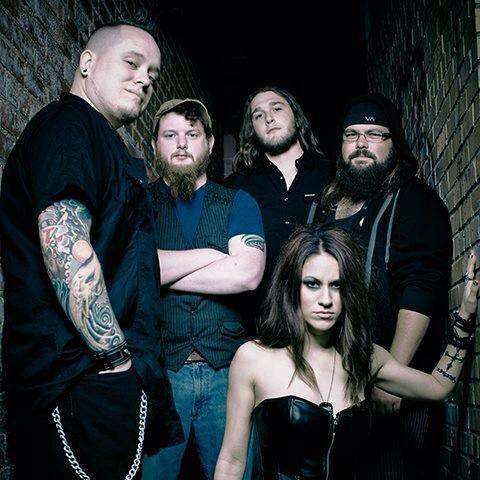 What dream tour would DFR want to be apart of? And why? Deftones, Sevendust, Tool... etc. We love so many different bands and just being a part of something of that caliber would show us how real musicians do their thing. We'd soak in the experience, appreciate the chance to see and feel reality of what we dreamed of all of our lives. We also want to reach out to new fans. Show who we are, what we do and for me it would be reaching out and changing others lives. I want to help people through their hard times. Let them know they are not alone. It's more than just a show or tour to me. It's an opportunity that awaits...What is DFR immediate goals? To get into the studio, record an album, release a video for our first single off of the album, book more shows with nationals, jump on tour again.. Keep gaining ground, reach new fans, get more involved with them and reach for the stars! The sky's the limit for us, we feel.

What should DFR fans be looking forward to for '14? Besides our new album and video... shows.. just a new rejuvinated DFR!! we are closer to our dreams and we have done our thing for a bit on the road, met new musicians from huge known bands as well as local bands from all over. We feel like we are coming together and getting stronger. No one knows what is to be expected exactly of DFR in 2014, but it will be an AMAZING year for us. We are pumped and ready for the adventures that lie ahead. We will enjoy them along with our fans!

Where can fans around the US and the world hear your music and stay updated on the band? You can hear us on itunes, amazon.com, reverbnation, spotify, youtube,... goes on and on forever and ever! Everyone can stay updated from liking our facebook official page. We are constantly checking it and updating all of our fans. Hope to see everyone at a show soon!