Megadeth was one of those bands that I had grown up with. They were one of the first  bands that my thrash metal  loving dad ever played in front of me. One of the very first songs I ever learned on guitar was “Moto Psycho” by them. One of the first albums I ever owned was The World Needs A Hero. They played a gigantic role in my love for everything metal. So, needless to say when I saw they were coming to town, I had to be a part of the magic of the night.

I stood in the crowd as their equipment was set up; the screens that would show the video to accompany each song, the drums, the guitars, the mics… All of it was about to happen right before my eyes. The people around me were restless and ready to go. The pressure in the air was building, and everyone’s anticipation worsening. Just as the crowd was approaching a breaking point of anticipation, it began… 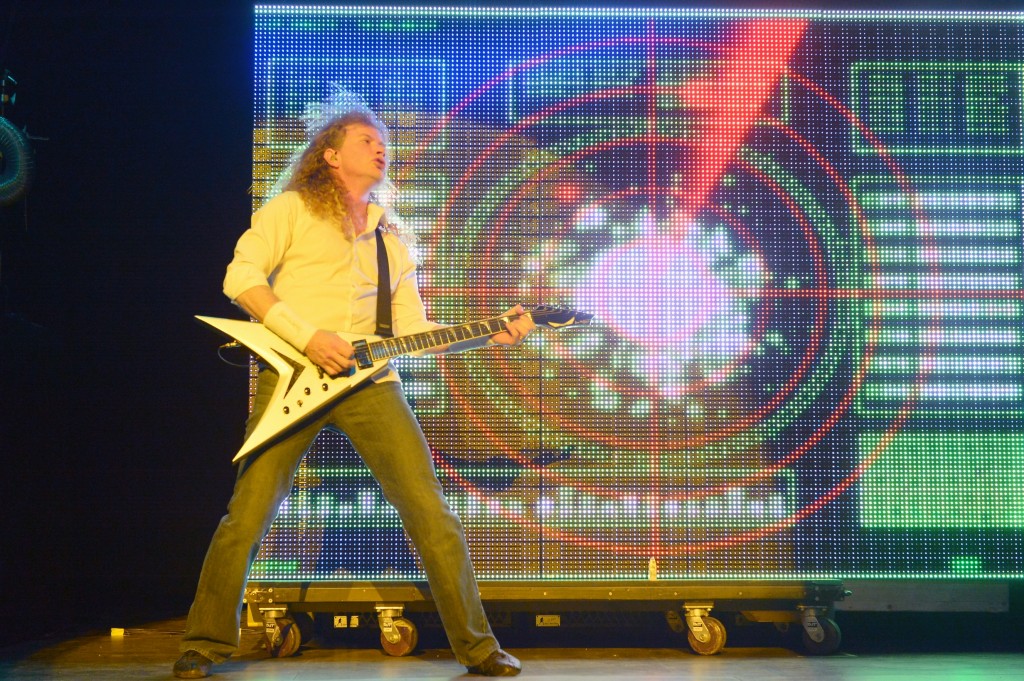 The room darkened as the main screen on the stage lit up with the mess of bolts and metal that builds the mold for the band’s logo. The crowd screamed as it was filled with a nuclear green ooze similar to that in the hand of band mascot Vic Rattlehead on the cover of their 1990 album Rust in Peace. The mold came off, and there stood the glowing, flaming logo that read very simply: MEGADETH. Out came drummer Shawn Drover, bassist David Ellefson, guitarist Chris Broderick, and the man himself, guitarist/vocalist Dave Mustaine.

They opened with Rust in Peace‘s “Hangar 18”, leaving a crowd screaming in the sea of black and devil horns. One song in and my mind was completely blown. After getting through a couple more songs, Mustaine took a moment to welcome everyone to the venue. He asked the crowd to scream if you had seen them before.  The sound was deafening. He then asked the crowd to scream if it was your first time, and as I made my presence known to those around me, I was taken aback by the amount of people who were experiencing their first Megadeth concert. During this, Mustaine noticed a young man in the front row, and once the screaming stopped, he asked the kid how old he was. After the response, Mustaine grinned and said, “22? My first time was way before 22.” This was not the only humor to take place during the night as between every few songs, clips from multiple movies that mentioned the infamous thrash band, such as the famous clip from Wayne’s World 2 where Kim Basigner’s character attempts to seduce Dana Carvey’s character and he asks, “Do you have any Megadeth?”

The night continued with Countdown to Extinction‘s single “Sweating Bullets”. The montage from the video itself going from cell to cell played behind the band as they played through it. At points the crowd seemed to be singing louder than the band, and multiple people could be seen making the same movements as Mustaine did in the video, such as the biting of his hand during the line “I’m chomping at the bit”.

The night took a somber tone as the lights dimmed, one single spotlight focusing on Broderick as he played the opening lines to Youthanasia’s “A Tout Le Monde”. I was extremely surprised and slightly disappointed that this was the only song they played off of the album, seeing as this November it will its 20th anniversary mark. Regardless, if you know the song, you know how moving, and to some, controversial, it is. The song was banned from MTV, claiming that it was pro-suicide, which according to Mustaine, is not true. For me, the song strikes a very personal chord. It was probably the highlight of the evening to me getting to see it performed live, for many reasons, and as much as I hate to admit this, I was probably the only person standing there letting tears stream down my face as my voice grew more hoarse with each lyric. 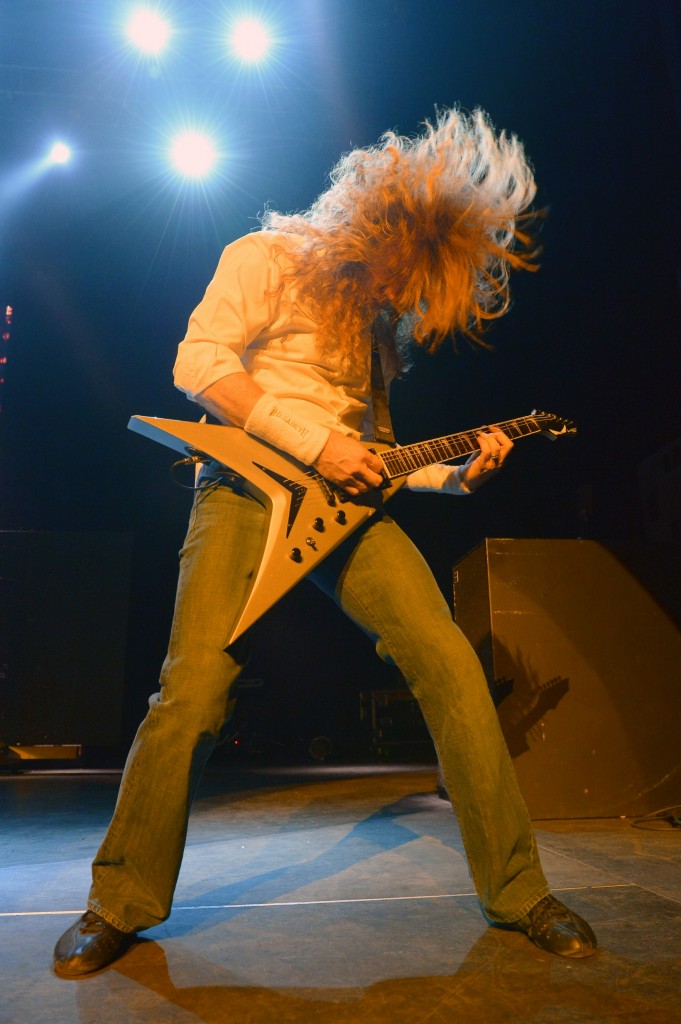 The night continued, and as my neck began to grow tired from headbanging, Mustaine announced that they were about to give the crowd a special treat from Rust in Peace, and the opening of “Tornado of Souls” rang through the venue. The crowd went wild, and as the night grew closer to a close with the ever popular “Symphony of Destruction”,   the moshpit did not discriminate. It opened up wider than it had been all evening as older men, young men, and even young women and a couple of KIDS (I mean LITTLE kids), knocked into each other.

The band closed the show with Peace Sells… But Who’s Buying?‘s ‘title’ track, “Peace Sells”. On the screens multiple religious and currency symbols were depicted in bold black against a sea of orange and red flame. Band mascot Vic Rattlehead patrolled the stage in a suit, waving to the crowd, mirroring the typically loved, and equally hated, politician. Upon finishing the song, Mustaine took a few moments to thank the crowd for coming out and spending time with the band. He walked from stage left to stage right and back again, bowing humbly before exiting, but as the chanting of “MEGADETH! MEGADETH!” grew more furious, they hit the stage again, performing an encore of “Holy Wars… The Punishment Due”.  As the song ended, the entire band bowed to the crowd together, setting their guitars in front of the drum kit, and waving as they left for good. I stood there, slightly disappointed that it was over, and yet I’d heard nothing off of the album that meant so much to me, The World Needs a Hero.  I stood there for a moment taking in everything I had just witnessed, and putting an end to all doubts I’d had about the show in my mind.  You hear people complain constantly about metal, Megadeth, and Mustaine himself, but what I witnessed were 4 humble men, there to kickass and serve the fans who had supported them for 30 years.

The lights came up in the venue, and in the blink of an eye, the moment I had waited my whole life for, turned into a positive memory. 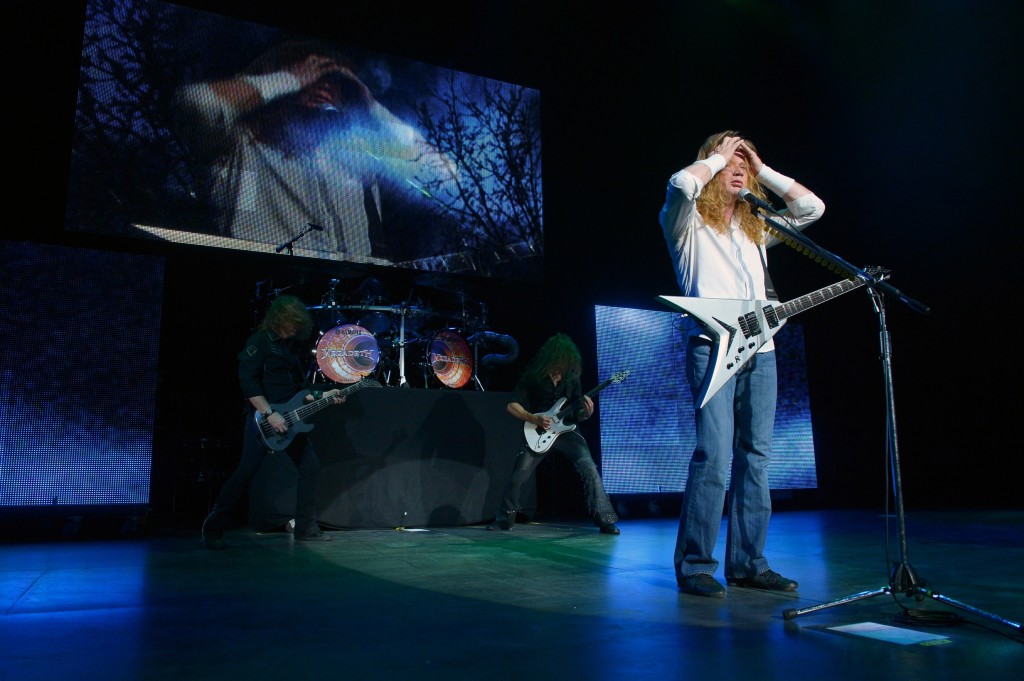 Photo Credit:  Photos by Bryan Steffy-   Courtesy of and © 2014  Bryan Steffy/PR Plus – All Rights Reserved.

3 responses to “Megadeth Ignites The Palms”