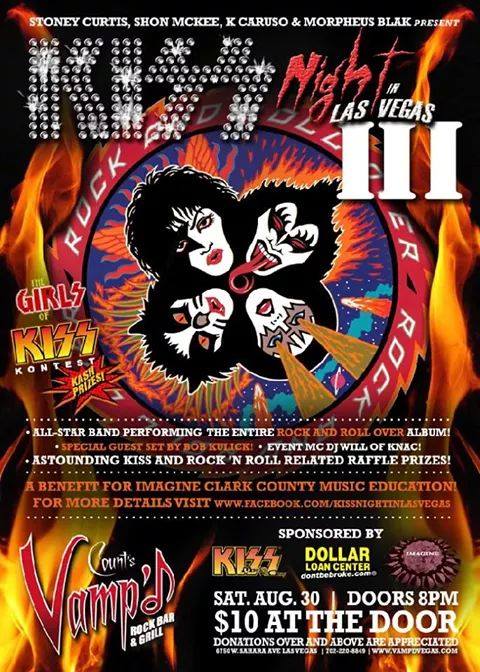 Cover of $10 at the door! Money raised will benefit the Imagine Clark County Music Education program

If you are in Chicagoland, you should go check out Diamond Rexx at Bada Brew in Crest Hill - if you are downstate in the Danville area go see Big Guns at the I & I at Stateline, If you are in Dallas you go to the DMS Metalfest- and if you are in the Vegas area you best be at KISS Night III at Vamp'd - either from kick off of the night ( doors are at 8PM ) or after you are done downtown or at LVCS!  $10 cover at the door and Money raised tonight at KISS Night III goes to Imagine Clark County Music Education! Bob Kulick will be there too (and if you are a KISS fan I don't need to go into his history with the band ) and there will be performances by the fantastic Sin City KISS as well as the great Stoney Curtis' LUST of KISS ( who we here will have a special guest at some point!) An all star band will perform Rock n Roll Over in it's Entirety! It's the 40th Anniversary of the Hottest Band in the World- come on down and do some pre-celebrating prior to the residency of KISS at the Hard Rock in November and help out a good cause to boot!  We WILL see you THERE!

You can get more info on KISS Night III at https://www.facebook.com/KissNightInLasVegas