I remember a sad day in April-  It was the second time in my lifetime that a man who moved a generation’s light had been exterminated.   The first time was when the man who so influenced this young guy from Aberdeen, WA, was murdered in front of his apartment in NYC-  that second time- it was a room above a garage across the country 14 years later in Seattle,  allegedly by his own hand.

Anyone who had even the slightest clue musically at the time knew that this music coming out of Seattle and the Northwest, referred to as Grunge, was going to pick apart our hair metalled lives… and while we were peering through an Aqua-Net fog, trying to figure out who these people  dressed in jeans, flannels, and T-shirts were, we couldn’t ignore the sound coming from the amps- or the impact it would make on rock music as a whole.  Nirvana were the front runners of this movement, and from the first strains of  ‘Smells like Teen Spirit’ and the Anarchy cheerleaders on our MTV screens taking the place of Poison’s ‘ Nothing but a Good Time ‘, we knew, the times they were a changing-  but everything froze that horrible April day…  It was on that cold, rainy day that Nirvana,  like its leader who was all of 27 at the time, ceased to be…

Jump forward 20 Years, and in the middle of the glitter and neon known as the Las Vegas strip, in a small theater tucked away in Planet Hollywood, the legend comes back to life, even for a bit,  in the form of Smells Like Nirvana, the latest artist in the Compendium series at Planet Hollywood.   We were ushered into the theater and saw a stage littered with 1990’s style TV’s;  some with static, some with the smiley face associated with Nirvana.  We took our seats, ordered our cocktails, and chatted about Nirvana and the Seattle scene and wondered what the night would hold while the sound of familiar 90’s bands like Screaming Trees,  Alice in Chains, and Mudhoney filled the theater.  When the lights went down, a video came on the main monitor as well as some of the little TV’s, all showing some of the early history of the band with a few interview clips intertwined, and the chords began for ‘ Breed’. The sound coming out of the lead singer dressed in Cobain style clothes and dark glasses with his left handed strung guitar was eerily like that of the late singer!  ‘Breed’ gave way to ‘In Bloom’ followed up by ‘Aneurysm’, and we were blown away by how well the band played the role of the fathers of the Grunge movement. ‘Smells Like Teen Spirit’ was complete with the Anarchy Cheerleaders we all know and love, and the crowd in attendance that night were diggin’ it!  Those of us who lived through that time as well as the younger ones who we had changed diapers for back when we all traded our brewski’s for a cup of coffee were completely enthralled with the sound coming out of these amps! We were all taken back to a period of time where changes were in the wind and 103.5 was The Edge.

The show covers all the various changes the band went through as well.  Another video graced the screens, and the set was adorned with candles and flowers like the set-up of the famous 1993 Unplugged session (recorded 5 months before Cobain’s death), complete with a cellist. As they ran through ‘Polly’, ‘ Dumb’, ‘ Lake of Fire ‘, and the chilling Lead Belly redo of  ‘Where Did You Sleep Last Night?’, you couldn’t help but get chills.  More video clips over the years, including the bit between “Johnny Carson’  ( Dana Carvey) and ” Ed McMahon”  ( Phil Hartman) from the 1992 MTV Video Music Awards after the Nirvana performance when they began to play ‘Rape Me’ and switched to ‘Lithium’ ( Carson- ” Now that I know the words to ‘Teen Spirit’ I like it even more- what is it?  An Albino, a Mulatto, in Toledo with Danny Devito? Is that it?”  It should be noted that Nirvana walked away with Best New Artist in a Video and Best Alternative Video Moonmen that year for ‘Teen Spirit’). ‘Heart-Shaped Box’ was immediately followed by ‘Something in the Way’  done with Kevin (Kurt) coming to the front of the stage and sitting cross legged on the floor with an acoustic, the haunting melody and lyrics softly sung and very moving.

Another transition with the commercial starring Bobcat Goldthwait for Nirvana’s 1993 album In Utero  played, and then came the final songs of the night.  The band thanked the audience and walked off as the static of the TV screens in the dark theater flipped to a MTV News clip with Kurt Loder. Those of us who remembered it crashing through the programming and being first shown back on that dark April day could feel the anguish again in hearing the words that Kurt Cobain had been found dead of an apparent self inflicted gun shot wound at his home in Seattle.  The screens went dark again, and we heard the beginning chords of ‘All Apologies’, with the band taking the stage once more and various stills of the band, and Kurt in particular,  flipping through like a photo album on the screen, reminding us that although he’d been gone too soon, what he left us lives on.

I can’t totally describe the absolute amazing performance done by the band,  from the drummer’s hair flying a la Grohl when he is playing, to not only the eerie perfect performance done by their lead vocalist Kevin in his role in bringing Kurt back, but the look in his eyes and tone of his voice, as if he were channeling the fallen singer.  I can tell you that if you had never seen Nirvana, this is the closest you will ever come to the real thing, and if you were blessed enough to catch them during that brief time in the 90’s, you will absolutely love the memories that come flooding back.  This is a Compendium show that is not to be missed, and it only has a couple of more weeks during this run. You can catch the show every Thursday, Friday and Saturday night at 10PM until September 27 at the Sin City Theater inside Planet Hollywood, and we have links to get tickets to this once in a lifetime experience at the bottom of this page!  It is as we say, not to be missed!   About the only thing we could say was missing from the experience was a mosh pit and some stage diving…

For Tickets to the Nirvana Compendium Show go HERE 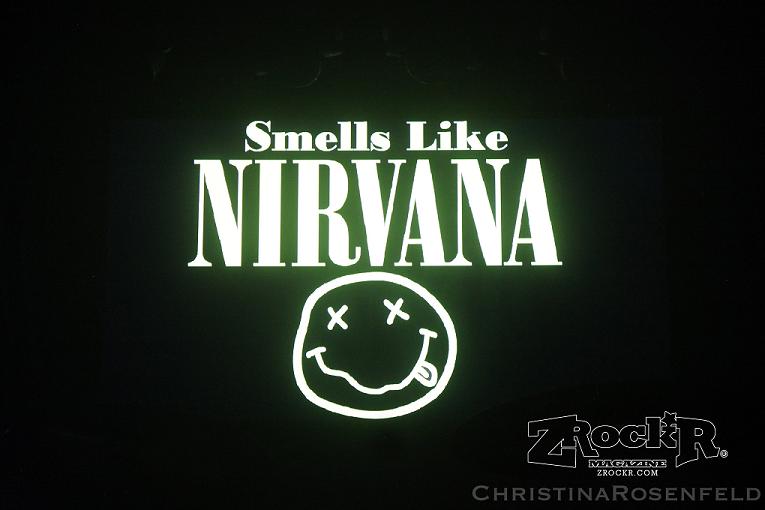 Compendium: A Tribute to the Myth and Magic of Nirvana is not affiliated with EPM Museum or the Nirvana Exhibit- it is mentioned purely for your reference

In Seattle You Can See the “Nirvana: Taking Punk To The Masses” exhibit at EPM- for more info go HERE