From the depths of the Sin City streets rises a new generation of metal. A generation jam packed full of fast paced guitars, gut shattering basses, and drums so out of this world, that Vinnie Paul would even bow down in awe. Accompany these instrumentals with a powerful voice, and you are left with local band Wretched Sky.

These guys are a refreshing dash of seasoning to the Las Vegas music scene, but underneath the music lies more than sheer badassery. These guys have big hearts, and in some ways, the ego to match... After 2 failed, yet fun attempts at sitting down and talking to these goofs, I finally got them all together. On a small couch in their practice space, I spent two hours trying not to cry from laughter.

At first, I thought it would be fun for the guys to interview each other. I figured it would be a nice change of pace from the first attempt at the interview process, where we sat in the Palms studio as their album was mixed in the background. Due for a late autumn release, the album was produced by bassist John Moyer (Disturbed, Adrenaline Mob, The Union Underground) and engineered by Robert Katz. The guys told me about how honored they were to be working with Moyer as well as Katz, and how well the album was coming along.

They discussed the writing process with me. Drummer Steven Taft and lead guitarist Dustin Turner, both founding members of Wretched Sky, spoke of how they had been going through the writing process since late 2013 while trying to put the final pieces into place, which did not happen until late April, early May of 2014. For a band who hasn't been around that long, nor have they really done any shows around town, they have come quite far. Not every band in Las Vegas can say that their very first album was produced by one of metal's best bassists. When asked how they came into contact with Moyer, Taft's response was:  "He grew up with my uncle back in Texas. I've known him for about 10 years or so. So, when it came down to it, everything just fell into place." He also spoke of what an honor it was to work with Jeff Ocheltree (drum tech for people like TOOL's Danny Carey and the late, great Led Zeppelin drummer John Bonham), saying his drums have never sounded so amazing. 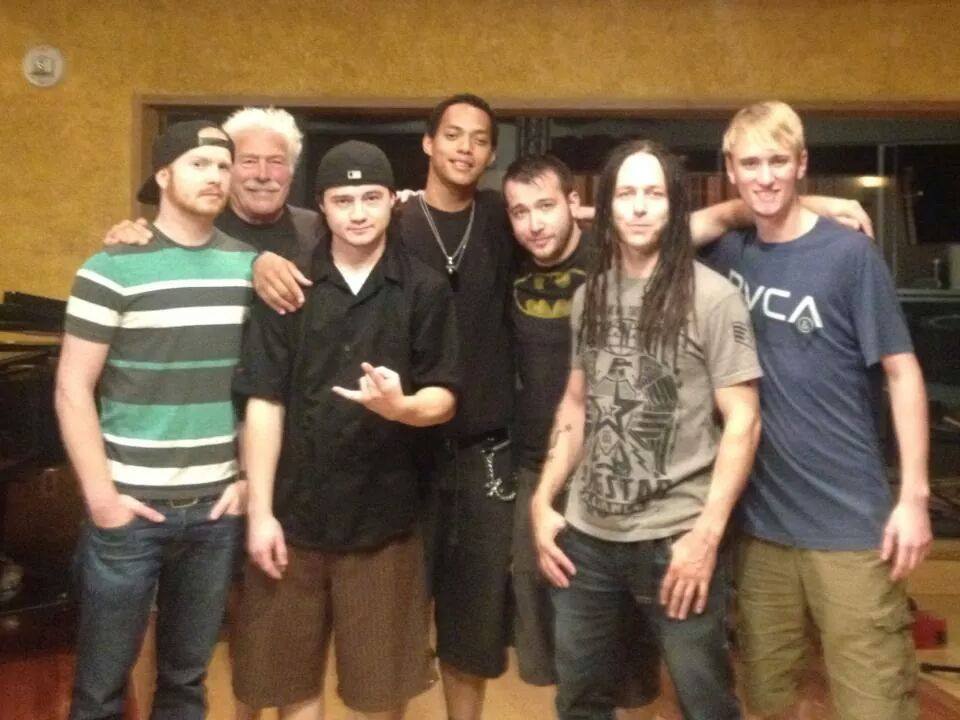 I also spoke to vocalist Brendan Shane a bit about how he feels about the current Las Vegas music scene, and the competition that goes on in it. "I think it is extremely stupid for bands to feel like they're competing in the Vegas music scene, because if they continue doing that, people will continue bitching about how there isn't a music scene. We're all in it for the same thing. So, we should be helping each other out. I don't see how bands are trying to compete when I have not heard a single band in Vegas that sounds like the other one. They may be playing the same genre, but they aren't the same people, musicians, or have the same tastes. So, I think it's ridiculous."

After the interview, and a much needed dose of Ibuprofen and water, I hung around with Wretched Sky (minus Shane, who needed to rest his voice), and decided to listen to them practice their set for their upcoming show at the House of Blues, featuring other local bands such as Devil's Run (formally Taking Dawn), Ill Patientz, Bipolar, and more.

Each song, despite lacking a full crowd, made me want to toss my devil horns in the air and let my hair wave with each headbang. They acted as if they were already on stage. Turner and rhythm guitarist (who is also easily the funniest in the band) Danny Kalei synched up perfectly together. Bassist Solomon Dilger had his best metal face on, and he made me actually want to pay attention to a bass. Taft hit each skin and cymbal with fury, tossing his sticks in the air when possible. Although Shane was not present for this event, having seen him live before, I could see him in my head, and the entire performance made me long for Saturday to approach faster.

Trust me; Not only is this a band you want to keep your eyes (and ears) on, but this is a show you will not want to miss. Tickets are free in advance through the band and only $12 at the door. With songs like "Hades", "Skin", and a very special cover tune that kicks more ass than the original, you will leave the House of Blues wanting anything and everything Wretched Sky related. 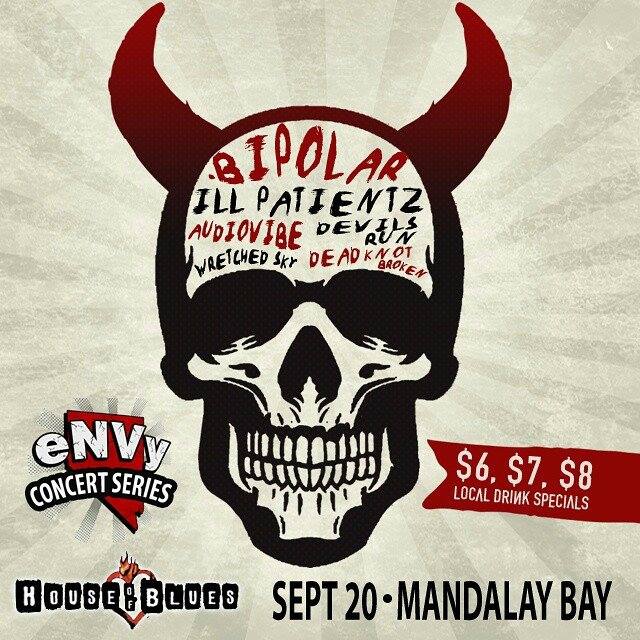 Envy Showcase featuring local bands at the House of Blues.

I will fully admit, as much as I adore the guys in this band as people, and as amazingly talented as they are, they do have some obstacles to overcome. Just like with any new band, you need to find balance, which I don't think they have fully grasped. I am curious to see how it plays out on stage, and I will absolutely keep you ZRock'R fans in the loop on how the show goes, but it seems as if there is a fight for the limelight in this band. Having worked with and reviewed many, many people in my day, from the Temptations to Motley Crue, and back again, these guys were by far one of the most difficult bands to rally together, which unfortunately, is one of the reasons why I have to make you guys wait on an interview with them. I've seen many bands crumble on the brink of success due to tempers and egos, and if there is any band in Las Vegas that has the full potential to go big, it is Wretched Sky. My only piece of advice to this starter band is to focus more on the now and let themselves shine through. Although it is obvious that some of the members crave the limelight, and seem to fight their way into it, they seem slightly scared to go further than where they are currently. I just hope that they can break past that barrier. Regardless, I promise that it will be well worth the wait!

I will keep you all posted. See you all on Saturday!

For more information on Wretched Sky, visit their Facebook at: www.facebook.com/wretchedsky