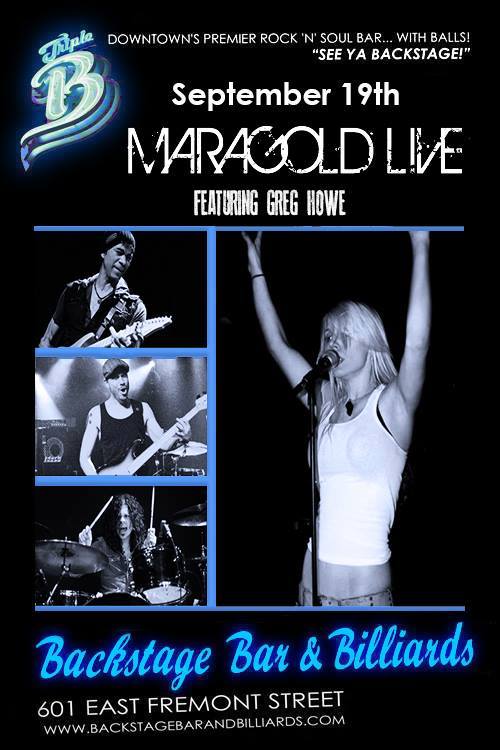 I was very excited to see the invite for Maragold’s first Las Vegas show. Their guitarist, Greg Howe, was prominently featured in ads in Guitar for the Practicing Musician magazine, from which I mostly taught myself to play guitar in the late ’80’s. His first solo album, as well as his next two “band records” with Howe II, featured a unique take on the shredder style typified on Shrapnel Records. His next album, Introspection, was a major departure, reflecting more of a jazz-rock fusion approach.

Howe has continued making music in the intervening decades, and I absolutely love his recent solo album, Sound Proof. Recently, he decided to take action on a project that had been on his mind for years: a vocal-fronted band. Greg had discussed the idea with his friend, bassist Kevin Vecchione, but their bi-coastal residences made it impractical. Finally they decided to make it happen, and began writing songs for their debut.

Originally, Howe and Vecchione were composing with a male vocalist in mind, but he became unavailable. Enter powerhouse singer Meghan Krauss, a fellow east-coaster with Vecchione. They had known of each other in their local scene, and her phenomenal ability and presence persuaded Greg and Kevin to change their plans. 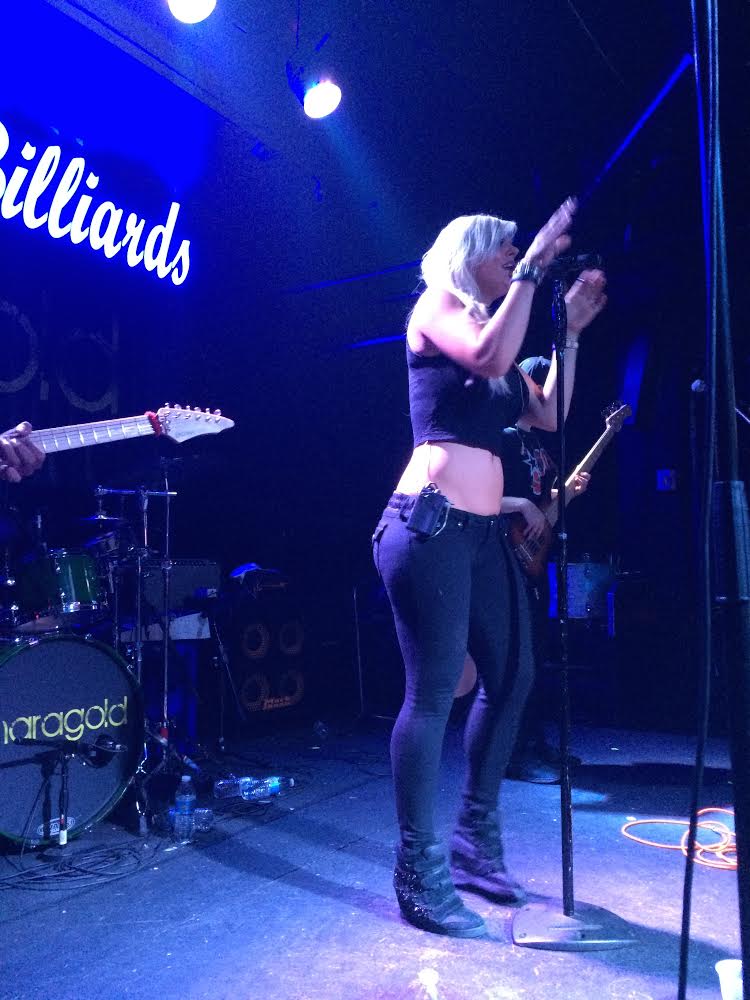 Meghan Krauss on stage at Triple B   (photo by Brad Bailey)

Drummer Dan Conway is the most recent addition, and his groove is just undeniable. I’ve seen tons of technically adept drummers, and Conway easily stands alongside them, but his playing with Vecchione just feels amazingly good.

Enough background, now to the show. Maragold exploded into their opening song, and Meghan Krauss was revealed as one of the most engaging and dynamic front persons I’ve ever seen. Her voice is amazing, akin to Sass Jordan. She owned the stage, and the crowd. Howe has likened her voice to an overdrive pedal that can be engaged at will, and this seems to be an apt description.

The rhythm section. Dan Conway and Kevin Vecchione have possible the deepest, best-feeling, groove I’ve ever witnessed. Speaking to them after the show, I was at a loss to describe how awesome it was, resorting to body language and exclamations of “damn!” I realize I’m not doing much better as I write this separated from the experience by a few days, but honestly, you should have been at this amazing show so I wouldn’t have to figure out how to tell you about it.

Then of course there is the brilliant Greg Howe. His guitar work is just stunning. Fluid and soulful, even when on a dazzling display of virtuosity. I would have liked him to be louder in the mix, but I can never get enough guitar.

A few songs into the set, Greg and Dan were grooving along to a shuffle beat (think Toto’s “Rosanna” or Zeppelin’s “Fool In The Rain,” with Howe’s playing being particularly engaging. With just guitar as the melodic and harmonic framework, it’s easy to just play notes, but Howe was creating a complete composition, which then morphed into the original tune, “Cry,” another fantastic piece. 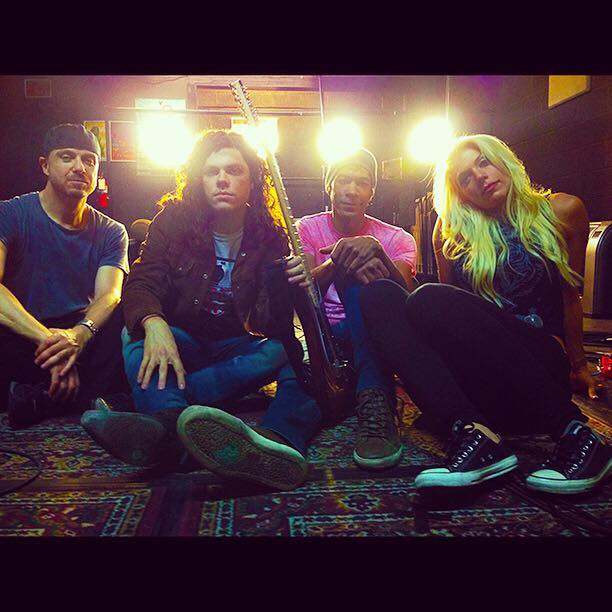 Soon there followed an acoustic set, starting with a guitar duel between Howe and Vecchione, with Conway supporting, where we discover that a bassist played guitar better than most guitarists ever will. Krauss then joined and they continued the mood.
The band returned to the high watt electric set, including a fun medley of classic rock hits which changed directions at whiplash speed. Finally, they closed out their set with a few more original tunes, the groove never relenting.

I would be remiss if I neglected to point out the fantastic songs composed by Howe and Vecchione. Maragold is not merely a band of great musicians with sub-par material; they absolutely deliver the tunes.

Throughout the amazing set, there were a lot of notable musicians in the audience picking up their jaws from the floor. I just couldn’t stop talking about how phenomenal the groove was, let alone the amazing vocal performance from Meghan Krauss. Howe and Vecchione’s backing harmony vocals were also quite impressive.

In a just world, Maragold will be huge. I will be seeing them play live at every available opportunity. You should as well.

Steve Rothery's The Ghosts of Pripyat Is ...

Guitars and Gear: A Conversation With Legendary ...