Home›Interviews›Do You Fear For Your Child: Buzz and Groovie Mann Talk With ZRock'R About Life, Love, Death, Change, Music, and of course, Thrill Kill Kult

Do You Fear For Your Child: Buzz and Groovie Mann Talk With ZRock'R About Life, Love, Death, Change, Music, and of course, Thrill Kill Kult 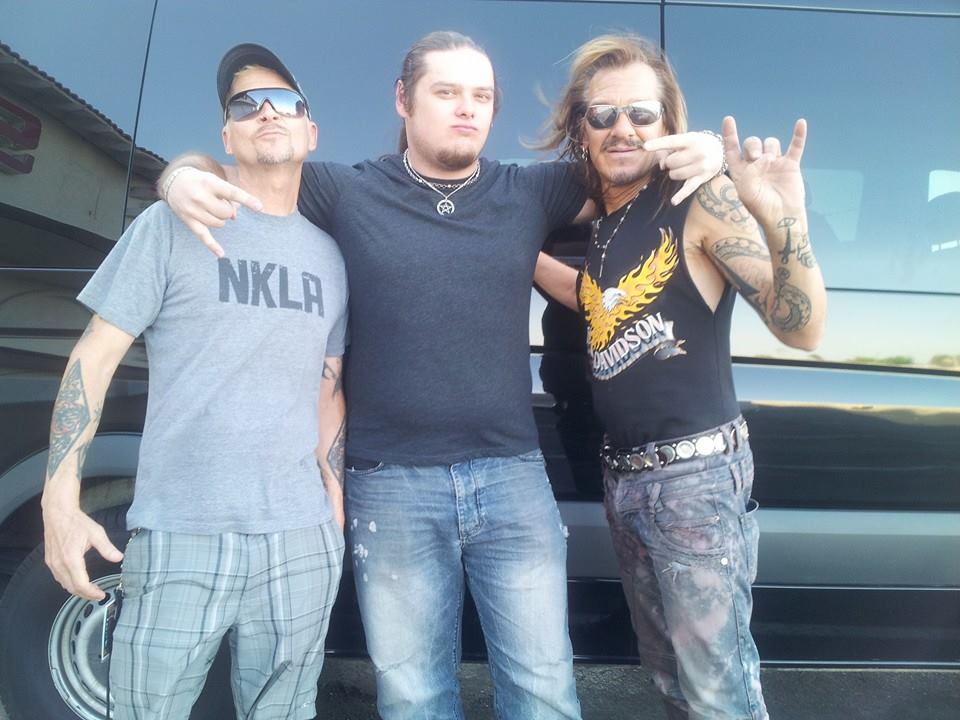 It's not everyday that you get to interview legends of a genre; And yet I've done it more than once!

I was unable to catch their show due to work, but thankfully we had someone able to cover it. In my 4th ever interview, I was able to talk to Buzz and Groovie Mann from My Life With the Thrill Kill Kult... and this is how it went down:

Zrock'R - So first off, the progression of industrial music in the last 25 years. Do you keep up with any bands nowadays, or do you guys just do what you guys do?

Buzz - Yeah pretty much. I mean we never thought we were industrial to begin with so yeah we just do what we do and people take it for what it is.

Groovie - Yeah they find what they want in it or not.

Zrock'R - How about your fellow contemporaries from that time, how they've progressed? I don't know if you keep up with any of those guys, like Ministry or Nine Inch Nails?

Buzz - Actually I don't know, I don't think a lot of them have really changed a lot.

Groovie - Yeah they all just kind of kept the same sound.

Groovie - Same with Nine Inch Nails, and you know that's fine because that's their identity. And that's their niche. But it keeps it more interesting for us

Buzz - We don't put limits on ourselves. We don't say our album sounds like "this"... every album has to sound different. We like the challenge of sounding different.

Zrock'R - But you always keep your indentity?

Buzz - There's always that little bit. We've got the samples.

Groovie - Yeah we have our style that sort of treats the sound if that...... makes no sense

Zrock'R - What made you go down the electronic route and not be in an average rock band?

Buzz - We had both started out in bands. I had purchased a sampler which was the new thing at the time and then thought "how cool we can sample movies and sounds so we can create our own thing without drummers and guitarists and bassplayers" you know, they came afterwards to help enhance the live experience.

Zrock'R - The new album, Spooky Tricks, I was just taking a listen to it a couple hours ago; I'm not familiar with a lot of your guys' material so I'm not going to pretend to but I have heard some of the old stuff and some of the new stuff and to me... it sounds like "you guys". It sounds like you haven't really deviated from the path very much, like there's still a lot of the 70's and 80's element with the drum sounds and the loops and... which I like that... I think it's cool you guys are keeping that in your sound.

Buzz - Oh yeah it's in our blood. You can't get rid of it. It's like we were born that way and became affected through all those genres.

Zrock'R - What were some of your influences and your early goals? Like did you think you would still be here in 2014 doing this?

Buzz - We never really look ahead and plan anything out. We just kinda go with the flow. And to tell you the truth we didn't really think we'd be alive. We didn't think it'd last this long.

Buzz - ahhh here and there, it's kinda boring now. I mean we've done so much, how do you top the shit?

Zrock'R - I guess the exciting thing now would be more normal now? How do you adjust to being normal? 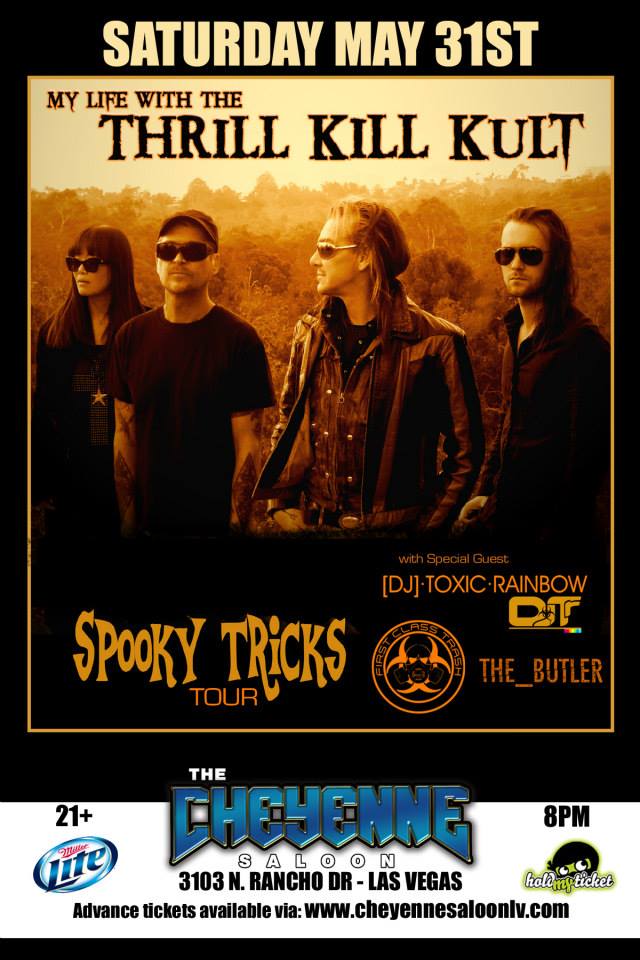 My Life With The Thrill Kill Kult or TKK as they are affectionately known.

Zrock'R - Are you guys living a normal home life nowadays?

Zrock'R - What do you in your free time? When you're not making music, what do you do to keep busy?

Buzz - He works on his art and photography. I work on music pretty much 24/7. I've got my own little projects; I never seem to finish them or anything but I smoke a lot of pot and I like to make music. I have dogs and go on hikes and all that kinda stuff.

Groovie - I have a med card.

Zrock'R - Alright so early on, you guys had a little bit of controversy with a couple songs. At the time, there wasn't a lot of things that had been done yet so, that was understandable. But nowadays, it's a little hard to be controversial, no matter what the topic is?

Buzz - Oh sure, yeah. Everything's been exploited so much.

Groovie - When you see fucking pentagrams in an Urban Outfitter's window you're like "ohhhhhhhh man, wow"....

Zrock'R - I mean, were you guys trying to be controversial or did it just happen?

Groovie - It was like the payoff. I was destroying religious art because I just always liked that. Little did I know that it was going to become so vogue. I mean fuck, now it's like you say... they've refined that stuff so much, it's so spelled out and so perfect that it doesn't even have an affect on anything. It's photoshopped.... it's glossy... it doesn't have that raw edge anymore. The roughness. I mean that's one thing that we still try to keep in what we do and that's why we do still use real musicians and we used real instruments in the studio and we like the raggedness of stuff.

Zrock'R - Is there ever going to be the movie, that was originally supposed to be? I mean it'd be easier to make now

Buzz - Oh yeah if we started now there'd probably be a movie and no band. Back then, we didn't have computers to edit on and not everybody had video cameras and it was a big deal then. It might be a completely different situation 30 years later. Who knows, maybe it'll be a Broadway show some day?

Zrock'R - The Bomb Gang Girls, the new girls compared to Jackie Black, Cinderella Pussy, Kitty Killdare. How do you feel about them?

Groovie - They're still there.

Buzz - Jackie's still around. She didn't get married and have babies like the rest of them (laughs) She's still the wild one. There hasn't been that many of them. They come and go.

Groovie - They shop up and we'll do some tours with them, I think Irena Rock is gonna join us for some of the shows. They are still part of it. When a new one comes into the picture, it's pretty natural. But they were bartenders and the girl next door. They weren't dancers or singers. Just chicks that we knew. We were just like "come on, come on stage, have a drink and flop your boobs around."

Zrock'R - Ok, so with your art (Groovie's), is it something you show publicly?

Groovie - It was just all these paintings I was accumulating and I just decided to show them and sold them all. I always have art in my life. I just let it naturally flow out of me.

Zrock'R - Have you ever done album artwork?

Zrock'R - Do you have any other side projects going on?

Groovie - Oh yeah. A few things that we both work on sometimes. Other people in the band I work on things with. Other people ask me to sing on their albums. I did a couple things last year with some friends.

Zrock'R - How about you (Buzz)? That little bit of unfinished stuff you've got going on?

Buzz - I don't know. I'll get it finished some day.

Zrock'R - Is it gonna be a solo thing?

Buzz - I'm not really sure. We'll see what happens.

Zrock'R - Eventually incorporate it into the Thrill Kill Kult?

Buzz - That's what happens a lot. I write a lot of stuff for one project and then we're like "ah that'd make a great Thrill Kill thing!"

Groovie - Riiiight, so we flop it around.

Zrock'R - Right, and you have your personal style anyway, which just happens to be you guys!

Our Condolences to the Family, Friends and ...

INSIGHTS INTO THE KICK OFF OF YOUR ...