Ace Frehley- The Spaceman Looks Back With Absolutely No Regrets 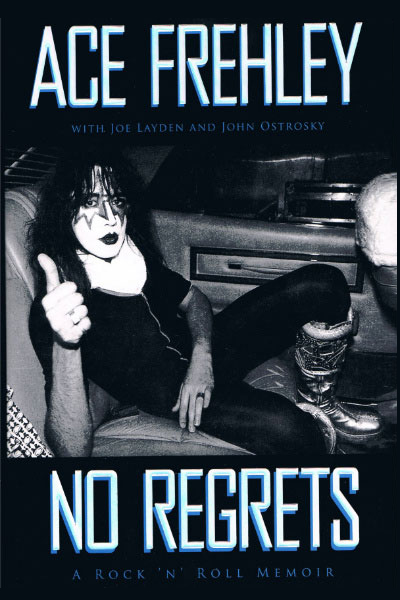 No Regrets is an autobiography by Ace Frehley, cowritten with Joe Layden and John Ostrosky. It was first released in 2011.

If there is one thing in the world of rock and roll that cannot be denied, it is the impact that KISS had on the world of rock and roll in the 1970s, at the height of their career. Paul Daniel “Ace” Frehley, the Spaceman, was largely responsible for their classic sound with his prowess on the guitar. While KISS has had many a solid guitarist in the years that followed Frehley’s tenure in the band, none came close to making the impact that he did. From KISS to a successful solo career, it has been a long and interesting ride for the Space Ace.

Next to the Beatles, KISS may very well be the rock band that has had the most books written about them. From authorized biographies from the band members themselves to countless books written by outsiders, there have certainly been highs and lows both in KISS’ career, and in the products that have been released to detail the band’s often spotty history. At long last, Ace Frehley himself has released an autobiography. As a fan there was no way that I was going to pass up giving this one a read.

No Regrets is Ace Frehley’s autobiography, aptly titled because he has come to have no regrets in his life. The book begins with his humble beginnings growing up with his family, moving on to having childhood dreams of rock and roll stardom. Over the years he became an instrumental component of one of rock and roll’s most legendary bands, eventually advancing to a successful solo career and other projects. From an ill fated KISS reunion to more recent solo releases, and other highs and lows alike, the Spaceman opens up, revealing his story to the world in detail for the first time.

As a die hard rock and roll fan (and certainly a big KISS fan as well!), I have started getting more into reading rock and roll biographies, autobiographies, and other related books. As KISS is a band with a convoluted history and confrontations aplenty, reading books from each of the band members definitely gives an interesting perspective on things. Overall, Frehley’s autobiography gives a look behind the scenes that will reveal a good deal of information, even if there are a few minor issues throughout.

As far as the positives go, you are going to get more details on Frehley’s life from this book than from nearly any other source., straight from the Spaceman’s mouth! You will hear about his childhood and life growing up, tragedies and embarrassing mishaps alike, and many rock and roll triumphs.

The book is paced well, not outlasting its welcome. The “early life” moments, which many claim drag on too long in many a rocker’s autobiography, are kept to a comfortable minimum here, covering only the major highlights and mostly moments that will appeal to the reader.

Furthermore, I give Frehley credit for taking the high road, and avoiding “blasting” his former KISS bandmates too often. It is clear that there are still unresolved conflicts here and there, but overall he goes about this in the best way possible, telling the truth, plain and simple. Frehley does not glamorize himself in the book, but clearly appreciates his triumphs and what is right in his life.

As with many rock and roll biographies, however, it is not perfect. As good as the book is overall, one cannot help but feel that a good many eras tend to not get enough attention. For instance, Ace left KISS in the early 80s following the recording of the Elder album, subsequently putting together the Frehley’s Comet band a few years later. The years in between are largely unmentioned. This is true of several other “down time” points in his career between albums/bands/etc., and you will wish some of the material here had gotten more of an emphasis.

Despite some flaws, No Regrets is a rock and roll autobiography you will have no regrets reading if you are an Ace Frehley fan. In a world of often lackluster rocker biographies, this one is definitely solid reading and will appeal to anyone who enjoys the Space Ace’s music. Strongly recommended!