Note that this review may contain potential spoilers from the first two books/films. Read at your own risk.

In recent years, The Hunger Games has become a cultural phenomenon. From books to the screen, it has become the next “mega franchise” in a relatively short period of time. With the film based on the first film hitting theaters, the popularity has continued to rise. It is a franchise that has become popular with people of all demographics; not an easy thing for any series to pull off.

For the unfamiliar, The Hunger Games is set in the future of what was once North America, in what is now known as Panem. Essentially, the population is divided into a number of poorer, working class “districts”, with the Capitol being the luxurious, high tech center of it all. As penance for their uprising against the Capitol several generations ago, each district is required to send two youths as “tributes” to fight in the Hunger Games, essentially a battle royale in an arena packed with numerous hazards and dangers. Only one can walk away alive, but that winner will receive better living accommodations for their families, and a lofty cash prize. Needless to say, having to send two children from their Districts off to die in a gory battle forcefully imposed by the Capitol does not sit well with the residents of the Districts, but they are forced to comply under law.

In the first film, preparations were underway for the 74th Hunger Games. Katniss Everdeen (Lawrence) of District 12 volunteered for the games in place of her younger sister, whose name was drawn, against the wishes of her friend/lover Gale Hawthorne (Hemsworth). Through the mentoring of former victor/drunkard Haymitch Abernathy (Harrelson), Katniss and fellow tribute Peeta Mellark (Hutcherson) managed to survive the games and return home to District 12. But that was only the beginning of the story, as they quickly discovered.

The second film saw Katniss and Peeta taking a victor’s tour and seeing unrest and anarchy in the districts, apparently inspired by their actions in the Games! Before long, though, the two were forced to return to the arena for the 75th games, a special event in which past victors were forced to return to do battle with one another, much to Katniss’ dismay. All the while, the leader of the Capitol, President Snow (Sutherland), was trying to crack down on this rebel activity in the districts in the best ways possible. Little did Katniss know that all around her there was a secret plan of rebellion going on – following the end of the Games, she finds herself awakened next to Gale, who reveals that her former home of District 12 no longer exists, and has been obliterated by the Capitol.

That brings us to the third installment of the franchise. Originally one book entitled Mockingjay, the filmmakers have opted to take an increasingly common stance with film adaptations of books, splitting the events of said book across two movies. The new film begins with Katniss now being a part of the once thought to be destroyed District 13, in a base occupied by rebels and refugees from the Capitol and their own respective districts – Katniss’ mother and sister are safe thanks to the actions of Gale while Katniss was fighting in the most recent games. Here, our heroine finds herself conflicted between what she should do – it turns out not all of the participants in the Games escaped, and Peeta is now a prisoner of the Capitol. She reluctantly agrees, joining forces with a rebel film crew that hopes to spread propaganda messages to unite the districts in an effort to take down President Snow and the Capitol, once and for all. Unfortunately, Snow is already onto their plan, and has his own methods of dealing with it. It is up to the rebels of District 13 to use their influence to come together with their brethren in other districts to accomplish their goals, or die trying. 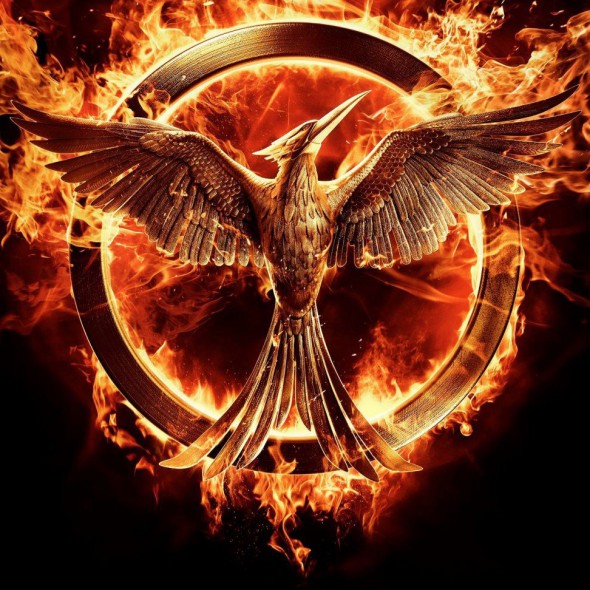 This is a tough movie to write a review of for a number of reasons, as any viewer is going to agree with after they see it for the first time. The one issue I had with the first two movies was that the build up to the games was a little slow, though there was definitely payoff when it got there. And that is the biggest issue I have with Mockingjay Part 1 – it is a slow, talky film that essentially spends two hours doing nothing – and there IS no payoff! You cannot help but wonder if it would have been better for the Mockingjay book to be made as one longer movie, rather than splitting it into two parts. As it stands, Part 1 meanders and does little to change the landscape of Panem. At the end, you will wonder if the status quo has even changed at all.

Furthermore, the third installment in the franchise feels outright bland compared to the predecessor films. When Katniss was thrust into the arena in the first movie, we experienced it firsthand with her, and had feelings of sheer terror that she could be killed or fending for her life at a moment’s notice. When people she grew to care about died in the games, we mourned them with her. Mockingjay, by comparison, feels like a bland, generic dystopian war movie. None of that terror or emotion is on display. So much of what we see feels artificial, scripted, and wooden compared to the intensities we experienced in the first two movies. Far and above, the biggest disappointment is that many of your favorite characters from the first two movies get considerably less screen time, in favor of new “filmmaker” characters who are outright uninteresting, generic stereotypes of the action and sci-fi genres. Granted, unlike many viewers of the film I am not familiar with the source material, having not read the novels. But I think people on both ends of the spectrum will agree that all of the new characters introduced here do not equal even one Haymitch Abernathy.

On a more positive note, the cast members we have come to know and love over the course of the previous movies still play their respective parts brilliantly. Jennifer Lawrence is, as usual, amazing in the role of Katniss Everdeen, able to keep the attention of the audience even in the most mundane of moments presented in this more limited installment. Other major standouts include Donald Sutherland as the villainous President Snow, a character who manages to stand as one that is truly menacing and fearful, yet a refined gentleman all the while throughout it all, and the late Philip Seymour Hoffman as Plutarch Heavensbee, the former Capitol game maker turned rebel; Hoffman sadly passed away during the filming of the second Mockingjay film, but if his performance in Part 1 is any indication, his work in the next movie is something to look forward to seeing.

When it comes down to things, splitting Mockingjay into two separate films seems like an ill-advised move when Part 1 ends up being overly talky and preachy, and devoid of any real advancement for the franchise. As a standalone movie it is weak and does not do anything substantial to advance the series or the storyline. Naturally fans who want to experience the complete story will want to rush out and see it, but even they are bound to find this installment sluggish and lacking compared to the first two. Do not expect much to happen, however; you will have to wait for Mockingjay – Part 2 to come out next year for the payoff that will complete the story.