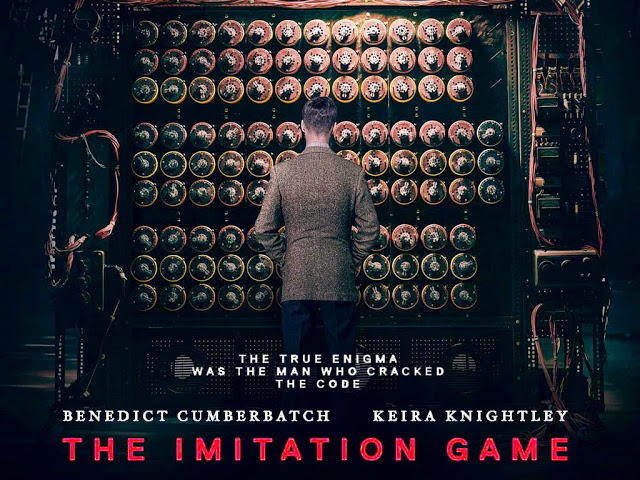 The Imitation Game is directed by Morten Tyldum, and is based on the biography Alan Turing: The Enigma.

The film stars Benedict Cumberbatch, Keira Knightley, Mark Strong, Charles Dance, and Rory Kinnear. The film’s musical score is by Alexandre Desplat. The film was scheduled for wide American release on Christmas Day 2014 and has already played at a number of festivals and limited screenings.

During the Second World War, violent, bloody battles were being fought all across the European continent, by land, sea, and air alike. Often criminally overlooked by popular culture, however, is the contribution from code crackers during the war. Working day and night tirelessly, these individuals used their intellect in an effort to aid the war effort, intercepting transmissions from the enemy and putting this decoded information in the right hands, for the sake of turning the tide of the war. The contributions of these code crackers considerably shortened the war and saved numerous lives, cities, and landmarks across Europe.

The Imitation Game is the true story of the intelligent but eccentric Alan Turing (Cumberbatch), whose efforts in code cracking and encryption machinery played a substantial role in helping the Allied Powers to win the war, and in the development of modern computers and technology. Using a non-chronological narrative of sorts, the film follows Turing’s life from his troubled early years in a boarding school, to when he first came aboard to help the war effort, going against the better wishes of his superiors and fellow servicemen, attempting to build and utilize the ultimate decoding machine. The film also explores the latter years of Turing’s life, including his criminal conviction for maintaining a secret homosexual relationship, and the crippling aftermath.

It is worth noting that the film had a troubled production history over the past several years – at one point Warner Bros. had even paid a substantial sum for the rights to the story, with plans to cast Leonardo DiCaprio as Turing! Needless to say, though, these plans never came to fruition. It is interesting to think, though, of how different the final result would have turned out under said circumstances.

Biopics and docudramas are always the most difficult films to write a coherent review for, because there are so many points of view from which one must analyze the film. Does it depict events accurately, as they actually happened? Is it a well-made film that casual moviegoers are going to enjoy? Does it come across as believable? Are the actors the right choices for the persons the work depicts?

Despite having studied history for years, I was not familiar with the work of Alan Turing, nor was I even aware of the existence of this film before I came across a free screening entirely by chance. The film ended up coming off as something of a surprise, and I am pleased to say that overall, The Imitation Game is a solid, well-made film with minimal flaws. Upon its scheduled widespread American release, scheduled for Christmas Day 2014, this moviegoer has a feeling it could end up being the last truly great film release of the year.

Although the film crew has put together a solid cast of actors for The Imitation Game, this is Benedict Cumberbatch’s movie. Next to Cumberbatch’s depiction of Turing here, the rest of the cast feels one-dimensional by comparison. Cumberbatch makes this role, and by that extent this film, his own. From wit and attempts and friendliness to win over fellow servicemen, to nervousness and sheer terror as his Turing hides his inner demons from friends and superiors alike, Benedict Cumberbatch IS the movie. In recent years, having caught him in a few films, he is an actor that has truly begun to win me over. Last year’s Star Trek film, Into Darkness, was a scattershot mess of a movie, with his role being one of the few true redeeming qualities. Likewise, this moviegoer/comic fan is elated with the recent announcement that he will be playing a key figure in the Marvel Cinematic Universe in years to come – Doctor Strange.

Cumberbatch owns this role and this film, but by extent this also means that the supporting cast tends to suffer; as good as the performances are, not one of them can hold a candle to Cumberbatch’s performance at Turing. The beautiful and talented Keira Knightley (probably best remembered by casual moviegoers for her part in the Pirates of the Caribbean films) is an interesting addition to the cast as a female code breaker in mostly male environment, but sadly, she just is not given that much to do, and spends long stretches of time off camera. This is not to say the supporting cast and characters are weak by any means; they just feel underdeveloped by comparison.

Prior to writing this review, I had been looking online to see what other people had to say about the film. Some of the more ludicrous complaints are those that accuse the movie of toning down Turing’s homosexuality. As far as this viewer is concerned, the movie touches upon this issue just the right amount, getting the point across as the film requires. To focus too much on this issue would have almost certainly ensured an R rating (or even potentially NC-17). Why are there no homosexual love scenes in the film? To put it simply, because there do not need to be.

The film’s treatment of Turing and the subject matter gets the job done just right. It is a well-paced story that never outlasts its welcome or feels rushed. While the film clearly wants to make the story of Turing known, at no point does it feel like it is attempting to glamorize or glorify him; he is a man who struggled every day in his life and was genuinely awkward, and you can see that throughout this movie. It also manages to feel humorous at times (largely due to the way Cumberbatch plays Turing) but does not sink into camp or comedy. Even the non-chronological narrative does not feel forced or like a gimmick; not an easy thing to pull off.

One minor negative about a mostly otherwise excellent movie was the final scene between Turing and Knightley’s character. This scene is the only one that feels over the top in what I considered a movie that is well grounded throughout otherwise. Knightley’s dialogue, praising Turing for being different from everyone else and for the contributions he made to society, feels like it was culled from an after school special. I agree with the whole “it is okay to be different” message conveyed here, but it feels too contrived and forced in this scene.

The movie also, at times, tends to create more questions than answers. These include a subplot about the presence of a Soviet spy and the impact it might have on the group’s operations, and whether or not to use knowledge of the cracked code to prevent certain disasters from happening, not wanting the Germans to know that the code has been cracked. These points make for an interesting moral dilemma of sorts, but never get explored much deeper than this.

People are going to nitpick The Imitation Game tirelessly, but the fact of the matter is that this is a well-made film telling the life story of one of the world’s true unsung heroes. Having made contributions that helped win the war and develop technology that is still used today, it is high time that Turing’s story has finally made it to the big screen. This is not a perfect film, but the ultimately negligible flaws should not stop you from seeing The Imitation Game when it goes into wide theatrical release.