Home›Reviews›Derek St. Holmes - Still Putting The Fans In A Stranglehold And Giving Them The Cat Scratch Fever All These Years Later!

Derek St. Holmes - Still Putting The Fans In A Stranglehold And Giving Them The Cat Scratch Fever All These Years Later! 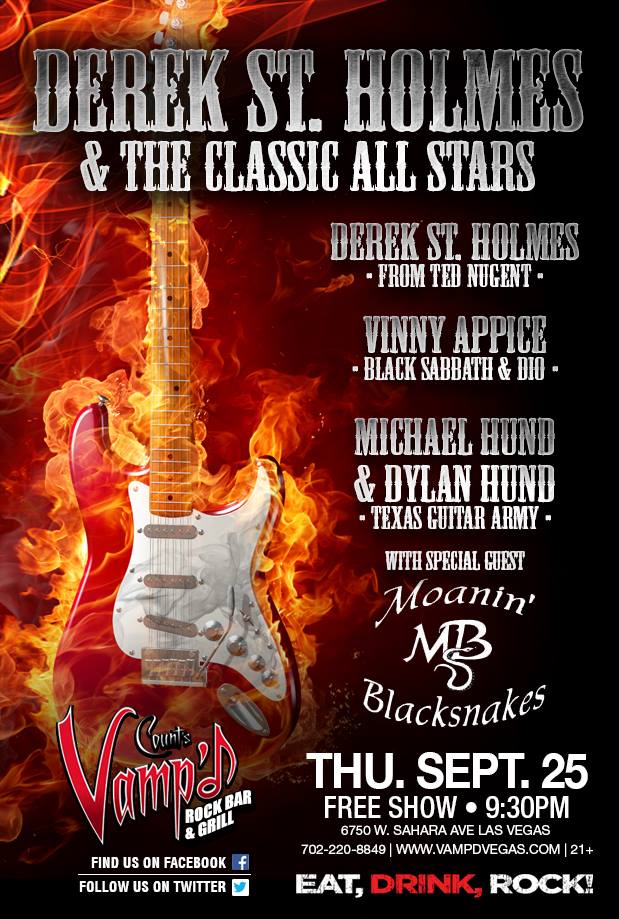 One thing that has always impressed me about Vamp’d is their ability to book some of the biggest name talent in the world of rock and roll, past and present alike. Perhaps at no time in recent memory has this been more true than with them booking Derek St. Holmes, the classic lead vocalist in Ted Nugent’s band. You will not get many chances to catch this man in a small, intimate venue, so needless to say, this rock and roll fan was there, on a Thursday night, despite having to get up early for work the next morning!

To die-hard fans of classic rock, Derek St. Holmes requires no introduction. This is the man who sang lead vocals on the good majority of Ted Nugent’s classic hits – Stranglehold, Hey Baby, Cat Scratch Fever, the list goes on! Furthermore, he has collaborated with other artists at different points in his career, including Aerosmith’s Brad Whitford and legendary guitarist Michael Schenker. He has also continued his career, recording solo material in addition to his other commitments. In recent years he rejoined Nugent’s band as well.

Drummer Vinny Appice is another person who likely does not need an introduction from this music fan here. He, of course, is best known for his work with Ronnie James Dio, both in the Dio solo band and in Black Sabbath/Heaven and Hell. Of course, his career goes back even farther, having worked with John Lennon in the 1970s, and a number of other artists as well, including Rick Derringer. Recent years have seen Appice teaming up with his older brother Carmine Appice, and doing Drum Wars shows, one of which occurred at Vamp’d a few months back.

Kicking off the night of rock and roll was a group called Moanin’ Blacksnakes. This is a group I had been hearing about online for the past several years, but had not seen live and in person until this night. It is always fun to see a band trying something different, especially in the sea of endless 80s rock/metal cover bands out here. These guys are completely opposite; a band that performs blues and blues rock style music primarily. Their opening set was definitely not what I would have expected, but in a good way. One of the highlights of their set was a faithful cover of the Stevie Ray Vaughan classic, Pride and Joy. All in all they kicked off the night very well.

Of course, Derek St. Holmes himself was the reason everyone came out. I myself was curious about this show and as to what his set would be comprised of. Would we be hearing the Ted Nugent songs he was well known for singing over the years? Solo material? Songs from the other collaborations he had done? This rock and roll fan was pleasantly surprised to find that the set was a mixture of all of the above, making for many pleased rock and rollers.

The show was unusual in the regards that it was A) on a Thursday night (rather than Friday or Saturday) and was B) a free show. Likely because of the night it fell on, the show was not massively busy like some Vamp’d shows. Those who opted not to go out this Thursday night missed out on an opportunity to hear one of rock’s great voices in fine form, doing what he does best. To any fans of St. Holmes who did not come out, I truly feel sorry for you.

When St. Holmes and company took the stage, they wasted no time at all getting right into the Ted Nugent classics. St. Holmes has an instantly unmistakable voice, and I was pleased to be able to finally see him in a small, intimate setting (I had previously seen him singing for Nugent at the Sunset Station Outdoor Amphitheater a few years back, but that is hardy the same experience as seeing someone in Vamp’d). When you hear St. Holmes singing these songs that he helped to make famous, there is no mistaking that voice. Even four decades after he teamed up with Nugent for Nugent’s solo debut, nothing else can be mistaken for the voice of the man who originally sang these rock anthems. Just What the Doctor Ordered, Stranglehold, Stormtroopin’, Hey Baby, Cat Scratch Fever, the list goes on! St. Holmes and company served up the classics in fine form! 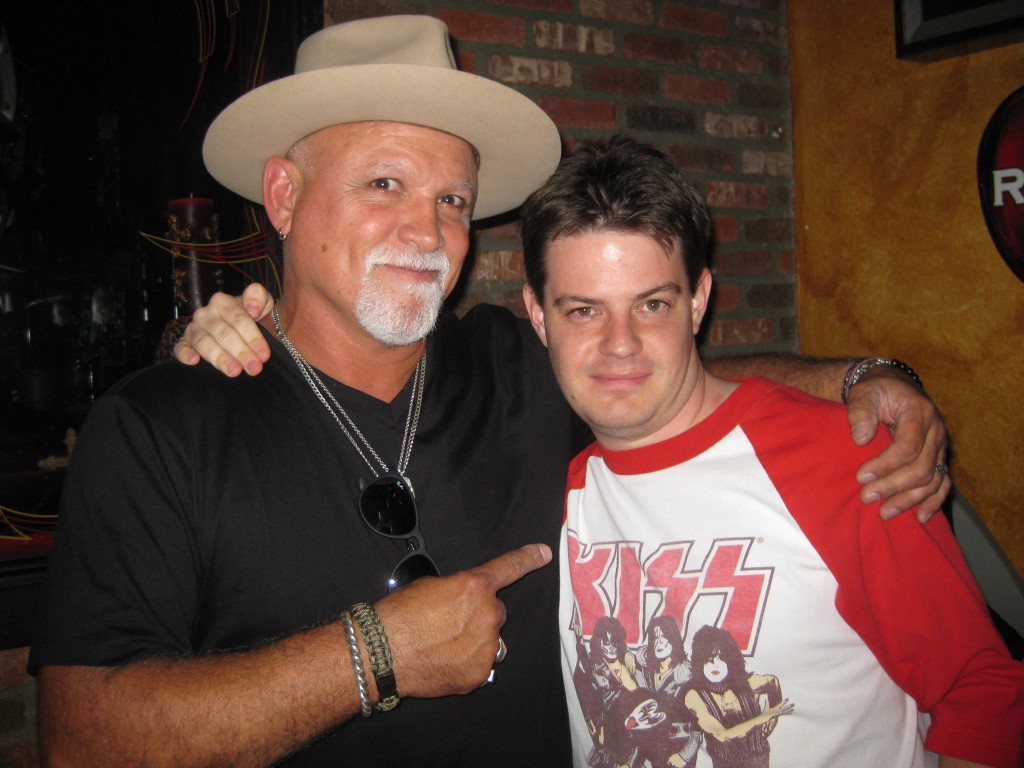 St. Holmes also dug into the deeper vaults as well, serving up some great solo material and songs that originated with other collaborations as well. It was great for fans to be able to hear some material they would likely not hear otherwise aside from at a show like this. The backing band was fantastic throughout, particularly drummer Vinny Appice, who is something of a rock legend in his own right. Furthermore, St. Holmes was also selling one of his more recent solo CDs and was even good enough to come out and sign things for the fans when the show finally ended.

It is great to see one of classic rock’s great vocalists out there, still going strong, even outside of the Ted Nugent camp (though he has since rejoined Nugent and continues to do his thing in and out of Nugent’s company). St. Holmes is still in his element and his voice has aged far better than a number of his contemporaries. Definitely see St. Holmes’ show if it comes to your town; it is worth it to see this man in a small, intimate setting you likely will not get a chance to do so in again anytime soon!

Richie Kotzen - Cannibals Is A Bit ...