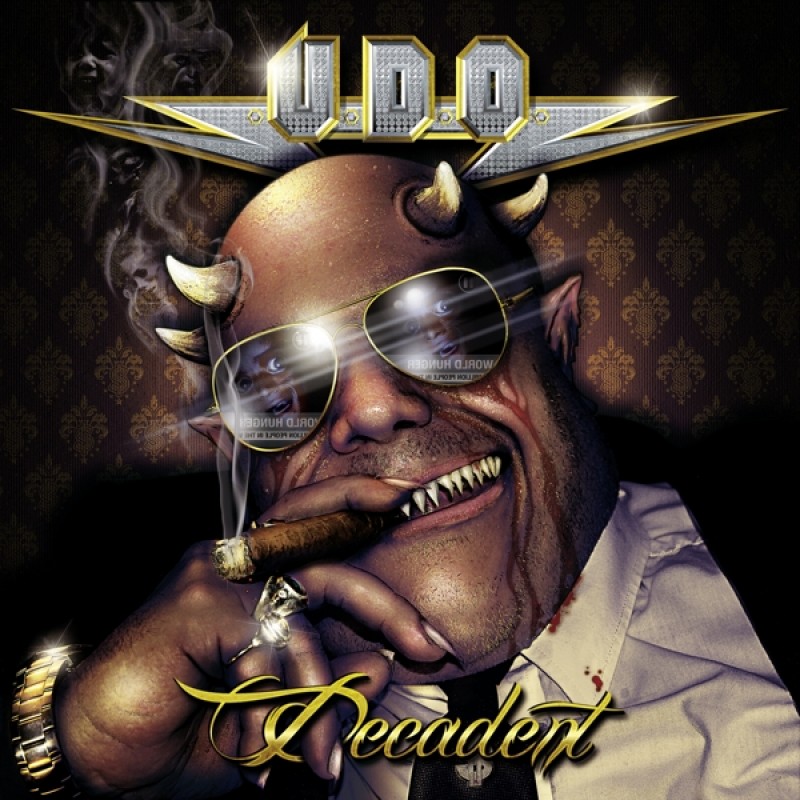 Decadent is the 15th studio album from UDO, released in the United States on February 3, 2015.

Accept made a major impact on the world of rock and roll in the 1980s, releasing classic anthems like Son of a Bitch, Fast as a Shark, Balls to the Wall, Restless and Wild, Love Child, and Metal Heart. Of course, the telltale voice of vocalist Udo Dirkschneider is the thing that many a fan remembers about these classic heavy metal hits. When Dirkschneider left Accept in the latter half of the 80s, he formed the new band, UDO, who released their debut, Animal House, in 1987. Aside from a brief reunion with Accept in the 1990s that spawned some new records, the UDO band has been active and consistent ever since. In fact, Decadent, the newest release from the group, is the 15th studio record from the group!

When someone first sees photos or video footage of Dirkschneider on stage, he is not exactly what someone envisions when it comes to heavy metal frontmen. That, however, is something he has always been able to prove wrong; his energy on stage and unique vocal style are undeniable characteristics that have always helped him to stand out from the crowd. Over three decades after Accept’s heyday, he is still going strong, having just released an UDO live album last year.

Before getting on with my comments of the music itself, however, there is one complaint that needs to be addressed – the absolutely atrocious cover art. This looks like something a rapper would use! I would gladly take a generic group shot of Dirkschneider and his bandmates over this abomination.

Fortunately, the lame cover art is about the only real issue I have with UDO’s latest studio effort. I admit, I have not followed Udo Dirkschneider’s solo endeavors as closely as I have followed Accept, but he has crafted a strong series of tunes here that definitely stand out; this record rocks hard from beginning to end. Dirkschneider and company have assembled a solid collection of songs that definitely have a more modern sound to them than the past works, but UDO modernizes the right way, not mimicking all of the modern rock trends out there like so many other artists have. If you are going to modernize your sound, there is a right way and a wrong way to do it, and Dirkschneider has given his fans something I am sure they are going to enjoy.

The majority of the songs on this album are straightforward, hard and heavy rockers, but the band also is not afraid to show things down on a few cuts as well, making sure that the release stays fresh from start to finish, with no dull moments. Throughout it all, Dirkschneider’s voice remains recognizable; even well into his 60s it is still a recognizable voice that the fans are going to enjoy hearing all over again. If you have never heard any of the UDO solo band material, you are definitely missing out, and Decadent might be the ideal place for you to jump on board if you are a classic hard rock and heavy metal fan.

In the end, Decadent is a fantastic release from one of the true voices of heavy metal. Mr. Dirkschneider and his partners in crime are still rocking the world and proving that they are not ready to be done making the fans bang their heads quite yet. This is an album that belongs in the collection of every hard rock and heavy metal fan!