Home›Movie Reviews›Whiplash - Superb Film Nominated for Five Academy Awards is a Must See!

Whiplash - Superb Film Nominated for Five Academy Awards is a Must See! 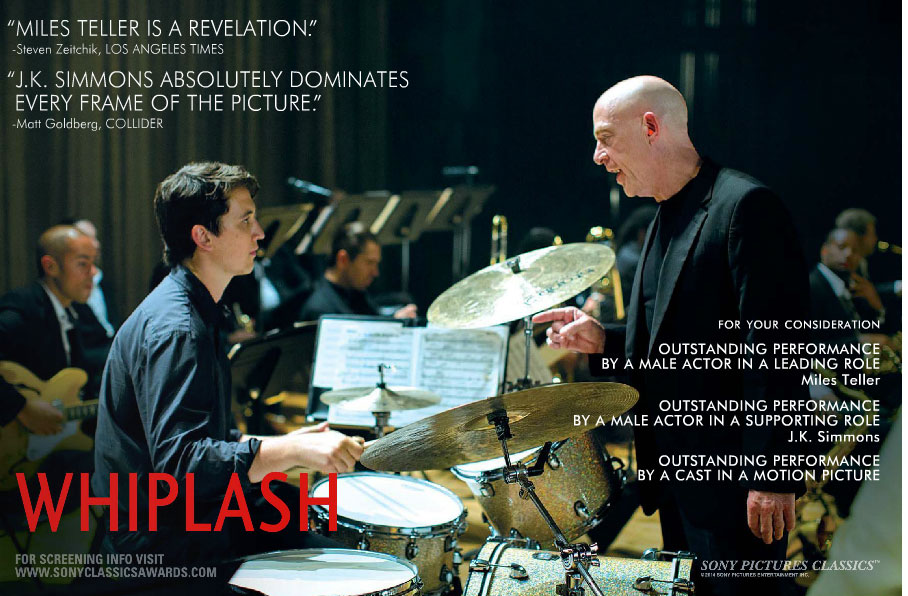 If you’ve heard of the film Whiplash, directed by Damien Chazelle, it’s probably only because you saw that it was nominated for 5 Academy Awards. That you most likely haven’t seen it yet is a travesty.

Whiplash follows a young drummer, Andrew, through his studies at a prestigious music college. He practices long hours, hoping to get the attention of Fletcher, conductor of the most prestigious big band at the school. Fletcher uses some extreme methods to push his students past their perceived potential, including verbal and physical assault, and public humiliation.

The film is essentially an exploration of the pursuit of greatness in one’s chosen field. How far do you have to push yourself, or be pushed, in order to be truly great? Or, as Andrew puts it, not just great, but “one of the greats.” Fletcher uses an example from the life of legendary saxophonist Charlie “Bird” Parker as justification of his methods. When Parker was a young player, he performed poorly at a jam session. The drummer, Philly Jo Jones, threw a cymbal at his head, and he was sent home, laughed off the stage. Parker went on to practice endlessly, eventually becoming one of the greatest musicians of the 20th century. Imagine, he says, if Jones had just said “good job.” There would be no Bird.

Fletcher is played by veteran character actor J.K. Simmons, known for many roles, such as J. Jonah Jameson in the Spider-Man trilogy, as well as from those Farmers Insurance commercials. He is absolutely amazing in this movie. He completely dominated it from the first scene to the last. As soon as the film let out, I checked this years Oscar nominations to see his certain Best Leading Actor nomination. I was shocked and angered to not see his name. I scrolled down and saw that he was indeed nominated, but for best supporting actor. His performance was so powerful that I was astounded that he wasn’t the lead actor.

Whiplash is a must-see film. J.K. Simmons’ performance is one of the best things you will ever see in a movie. Seriously, stop reading this, go on Fandango, and find a show time. Now.