An Evening With Machine Head @ Vinyl 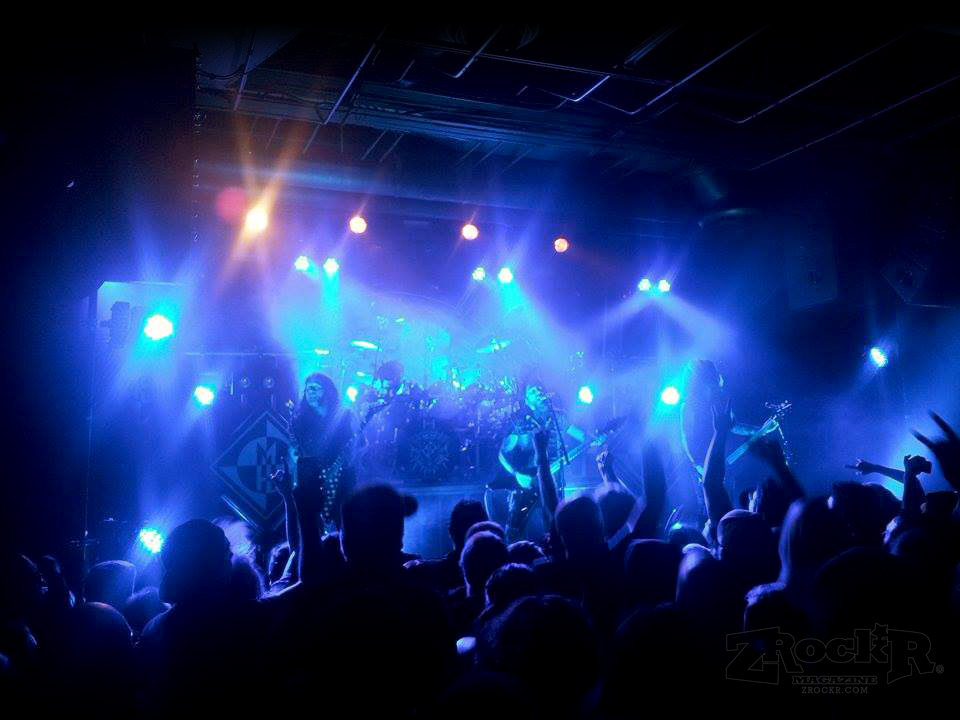 Imperium, the first track off of 2003's Through the Ashes of Empires exploded and began this epic adventure through the 20+ year career of one of the biggest "underground" bands in the US and certainly a flag-bearer for the New Wave of American Heavy Metal. A tired and old term now, considering many of the bands connected to that tag are gone (but not forgotten) now.

Machine Head came before it, flew right through it, and are now seasoned veterans.

Their newest (and 8th) album, Bloodstone and Diamonds dropped in November which is the first to feature new bassist Jared MacEachern in place of co-founding member Adam Duce.

When it comes to Machine Head, you can always expect heavy melodic aggression and groove. Their riffs have always induced neck-breaking headbang material that's impossible not to move along to.

I waited 13 1/2 years to experience them live because they rarely ever come to Vegas. Did I ever get that chance to get all Machine Head'ed out on my first time!

Davidian and Old from Burn My Eyes, Ten Ton Hammer from The More Things Change, From This Day and The Blood The Sweat The Tears from The Burning Red, Bulldozer from Supercharger, and Imperium and Bite the Bullet from Through the Ashes of Empires.

Not knowing what the setlist was going to be, when the above mentioned songs were played, I enjoyed them the most. Now that I can look back at it, I know that for a fact.

Trust me, I'm not knocking The Blackening, Unto the Locust, and Bloodstone & Diamonds at all. I just didn't hear enough of the songs that resonate most with me. My own personal thing 😛

From those 3 albums we got Beautiful Mourning, Now I Lay Thee Down, Aesthetics of Hate, and Halo from The Blackening; Halo being the final song of the night. Aesthetics of Hate of course being dedicated to Dimebag Darrell. Locust, This is the End, and Darkness Within were played from Unto the Locust. Now We Die, Killers & Kings, Sail into the Black, Beneath the Silt, and Game Over were played from Bloodstone & Diamonds.

Mainman Robert Flynn demanded a gigantic circle pit during Killers & Kings and it certainly wasn't a bad one. Our mass of Headcases (Machine Head fans) spread wide to open the pit up while the bodies jumped in and became a whirlwind of brutality.

While some would say that The Burning Red and Supercharger are 2 of Machine Head's worst albums and that they sold out and all that good stuff. The reality is that Machine Head have only become more popular in the last decade since returning to their "real" metal roots and expanding on that sound. I personally like/love all their albums and have no real qualms with those 2 semi-experimental eras. They were a product of the times and honestly I can't imagine them being any different than they have been.

They may have had a little fun with their sound and image for a couple years, but Machine Head have always been a very real band based on human emotion and dealing with those and life in general. Politics, social commentary, transgressions, struggle, abuse... all topics Rob has covered extensively.

As Rob himself said during the show, they "feel it", and so do we. He said they never tried or wanted to be the biggest band in the world, but perhaps the greatest. it's not meant to strike a debate. It's purely from the heart that they've bled for their music and their fans bleed for it as well. I'm one of them.

This show meant a great deal to me, just like this band has since I was 15.

I went to this show alone, and I felt very alive and felt many things while the music was playing and the electricity in the room, the heat, and the glaring bright lights shining in my eyes... I felt it.

This is what I live for, and so does Machine Head.

My favorite moment of the night was probably during the breakdown/ending of Davidian, which they play even slower live than on record. It was slow and hitting extremely hard, and halfway through it Robert screams out "SO FUCKING HEAVY!" to the groove. I had my eyes closed during that part and I started laughing but continued to absorb the moment...

It was indeed Rob; So, fucking, heavy.

Please come back to Las Vegas. You don't come here nearly enough. The fact it was also at the Vinyl made it that much more appealing.

I don't know how you guys are doing 2 1/2 hour sets for an entire tour with this aggressive style. Drummer Dave McClain is clearly a beast, and Rob's voice... I can only imagine by the end of this whole thing.