NOTE: This review does contain spoilers for people that have never seen the Star Wars films before; it is virtually impossible to discuss such stories without mentioning key plot points from the movies. Read at your own risk. 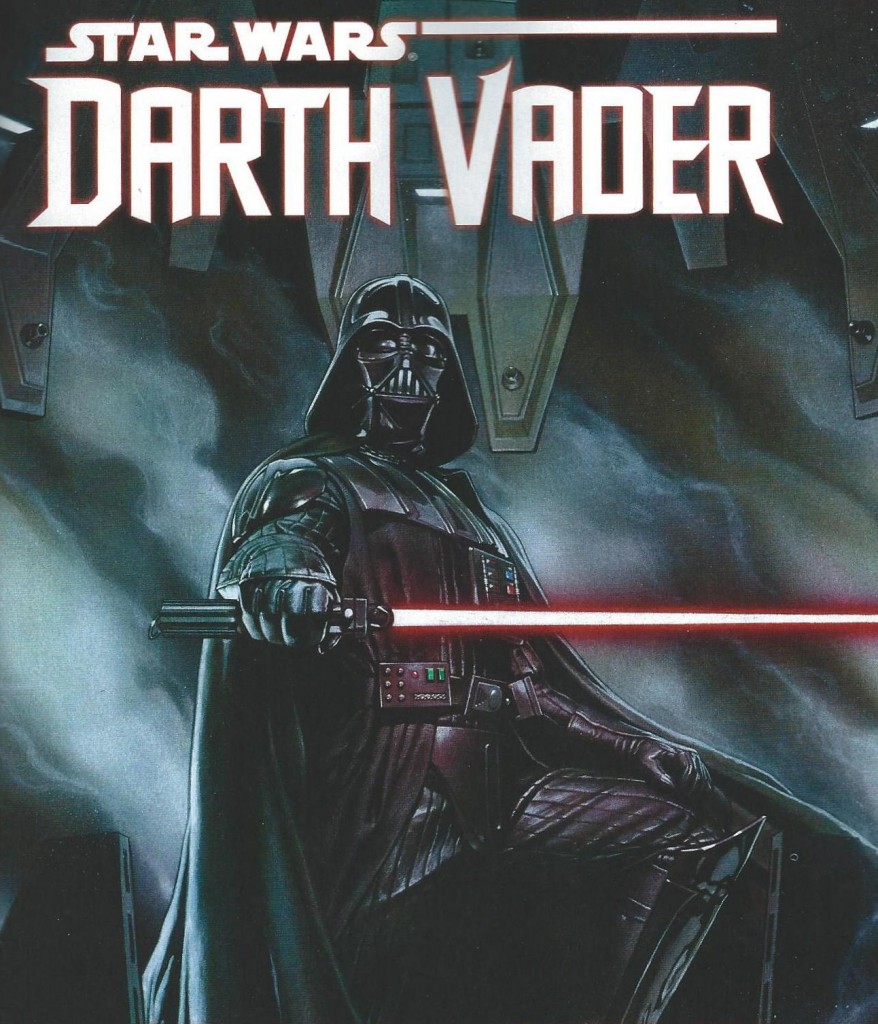 Star Wars Darth Vader 1 is the first issue in this ongoing story following the events in Star Wars Episode IV: A New Hope.

After a few months of Marvel having retained the Star Wars license, the new Star Wars comic book series is in full swing. Currently, there are three series running simultaneously – the main series (simply entitled “Star Wars”), Darth Vader, and Princess Leia. The main series and Darth Vader series are ongoing, whereas the Leia comic is planned to only run five issues. With two of the Vader comics having been released so far, this Star Wars fan thought it was high time to do a review.

2015 is shaping out to be one of the biggest years in the history of the Star Wars franchise. In addition to Marvel regaining the comic book rights from Dark Horse, the Rebels animated series is scheduled to continue, numerous Expanded Universe novels are being released, and perhaps most importantly, we have a brand new live action theatrical film to look forward to this December, continuing the saga on the big screen.

Like the other two comic series that Marvel is releasing, Star Wars: Darth Vader is set in the three year gap between the Episode IV: A New Hope and Episode V: The Empire Strikes Back feature films from the Classic Trilogy. The Death Star, the Galactic Empire’s ultimate weapon that was meant to maintain peace and order throughout the galaxy, has been destroyed by Luke Skywalker and the Rebel Alliance. Furthermore, Rebels (including Skywalker) have launched a successful raid against one of the Empire’s top weapons supply stations, which even Vader was unable to stop. In this time of crisis for the Empire, Emperor Palpatine sends Darth Vader to Tatooine to negotiate with Jabba the Hutt over necessities for the Empire. But, Vader has his own agenda, which includes hiring bounty hunters to help him capture the mysterious Force-sensitive Rebel pilot that destroyed the Death Star. Later, Vader must, under the command of one of the Empire’s top generals, lead a surprise attack against a Rebellion outpost. But there are suspicions that someone has been leaking the Empire’s secrets. 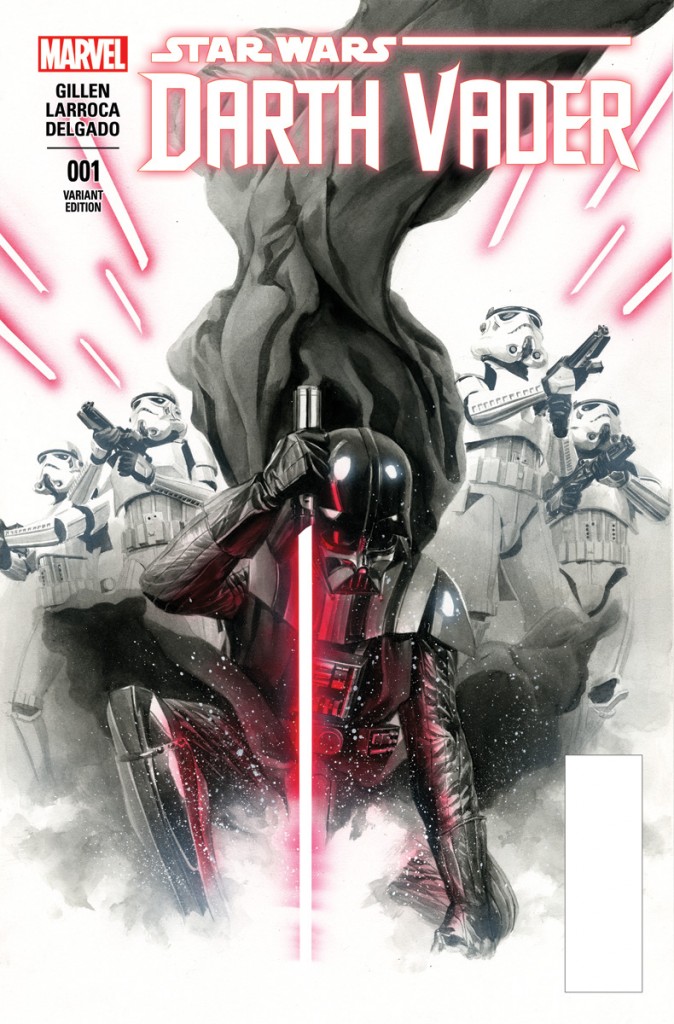 Like the other recent Star Wars comics, the Vader series is being offered with a number of variant covers.

Of the three Star Wars comic series that Marvel has launched so far since regaining the comic rights from Dark Horse, the Darth Vader series is the best. Vader has always been the most compelling and interesting character in the Star Wars universe for countless reasons, not the least of which are his ruthless nature and his tragic backstory. As such, he is one of the most difficult characters to convey in other non-film media, including novels and comic books, but the crew responsible for these comics has succeeded beautifully. Getting to explore what Vader was up to between the first two films in the Classic Trilogy is definitely an interesting and exciting turn of events, and it is good to see that it turned out so well.

Anyone who has read further Expanded Universe material and has seen all the movies knows that the relationship between Darth Vader and his Sith Lord master, Darth Sidious (AKA Emperor Palpatine) is not quite as one-dimensional as it appears on the big screen. Vader, formerly Anakin Skywalker, Jedi Knight and hero of the Clone Wars, swore himself to the teachings of the Dark Side of the Force in an effort to save the life of the woman he loved from an uncertain fate. Things did not go as expected. Vader was maimed and burned beyond recognition in a Lightsaber duel with former mentor Obi-Wan Kenobi and left to die. Vader’s injuries stripped him of much of the Force-endowed potential that he once had, requiring him to wear the life-sustaining body armor that is perhaps the thing most associated with the character. Furthermore, he was unable to save his love, and to return to a hero’s path, condemned to a life of servitude to a master that failed to give him the help he needed. Naturally, deep down, Vader harbored animosity towards the man who took him down the ill-fated path. In other Expanded Universe works, many of these factors are made clearer, and they are at least somewhat reflected in the undertones present here. It is clear the writers not only understand the character, but have done their homework as well. None of this here becomes a major focal point during the comics (at least not in the first two issues we have gotten so far), but I am pleased to see that the team working on this comic understands Darth Vader. That is a challenge unto itself. 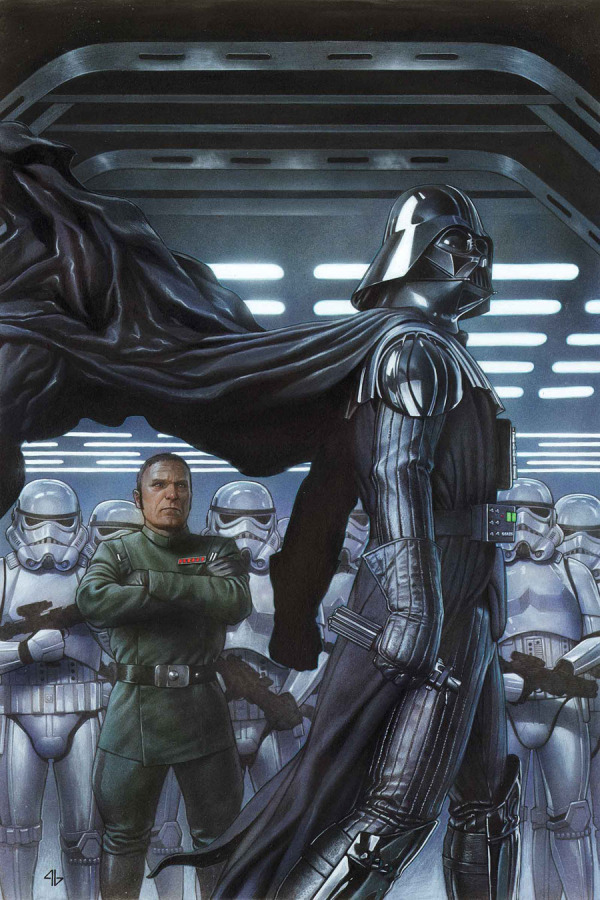 The cover art for Darth Vader 2, continuing the story told in the first book. The series is set to continue further with the release of Darth Vader 3 in March 2015.

The crew also deserves credit for their artwork and writing as well. The script feels believable and in line with the films themselves, and the artwork definitely remains a feeling true to the character’s origins and history as well. One must read these comics to truly be able to appreciate them, of course. But the team assigned to work on the Darth Vader series has certainly done their job well.

Of the three Marvel Star Wars comic series that are being created right now, Darth Vader stands as the strongest of the three, thanks to solid artwork and fantastic writing by a team that clearly understands the character and knows his history and inner workings alike. If you are at all a Star Wars fan, and you have seen all the movies multiple times and are looking for a great way to pass the time until Episode VII hits theaters in December 2015, this comic series is a sure fire way to accomplish that goal. Visit your local comic shop up and pick up Darth Vader 1 and 2 today. Very highly recommended!