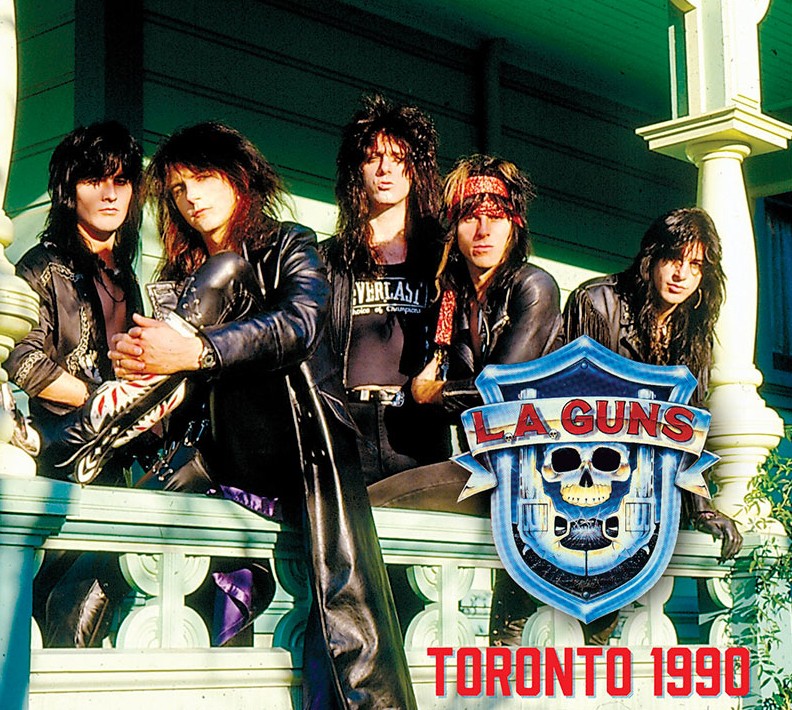 LA Guns' Toronto 1990 is the latest release on CD of a live vintage LA Guns concert.

When it comes to the 80s rock scene, no band tops LA Guns. This is a band that has had well over 40 members in its three decade plus history, but no incarnation of the group tops the classic five piece lineup that recorded the first three records, featuring vocalist Phil Lewis, guitarist Tracii Guns, guitarist Mick Cripps, bassist Kelly Nickels, and drummer Steven Riley (who actually joined after the debut was recorded). The current version of the band retains Lewis and Riley, while Guns himself has pursued other projects; he had his own version of the band for a number of years as well.

The past few months have been an exciting time for LA Guns fans that want to hear the band’s vintage material done up on a live stage. Last year saw the release of a live album recorded in Boston from the band’s classic era, and here they have done us one better, giving us a show from Toronto in 1990! If you are a fan of the group, should you be adding this one to your collection as well?

Even though LA Guns’ classic studio records were great, one thing no one can deny about LA Guns, past or present, is that they are a great live band. Nowhere is this truer than on the vintage live performances that the group did to promote their first (and best!) three studio records. With the Boston show released on CD last year and now this Toronto release, is this the beginning of an ongoing live LA Guns archival series? Whether it is or not, fans are going to be busy checking out these releases, finding a lot to love around them.

This is a great concert that any fan of the band is going to be blown away by. Just one look at the tracklist reveals many of the classic hits from the group’s first two records; every tune here is a classic that is beloved by the fans. The high energy live sound prominent throughout will keep the attention of any listener and more than live up to the expectations of a fan. Furthermore, this is that rare live album that actually sounds and feels live, yet has decent audio quality throughout. The live sound on a number of these tracks is a far cry from the sometimes slick studio album production the band received on a number of early releases, and this sound is going to appeal to fans who know what a great live band this is. The between song banter (which features Phil Lewis using the F-word a whole lot!) further adds to the experience and live feel of the album.

It is hard to say if this release is superior to the live Boston show that was released last year, but there is reason enough that fans of the band will want to pick up both releases; they are NOT merely clones of one another. There is diversity enough in the setlists and performances alike that you will be eager to add both to your collection as a fan of live vintage LA Guns.

LA Guns kicks ass whether they are in a studio or on a live stage, and the vintage live performances by the band from the late 1980s and early 1990s are the stuff of legend amongst fans. Here you get the ultimate LA Guns lineup delivering what is one of their most legendary concerts; seeing it get a legitimate release is going to be the Holy Grail for any fan of the group! Absolute highest recommendation for any fan of the band.

NOTE: The above is a classic music video from the band, and not content from this live CD.

On Through the Night - Oft-Forgotten Debut ...