And Speaking of Scorpions.... the autobiography from Scorps drummer Herman Rarebell! 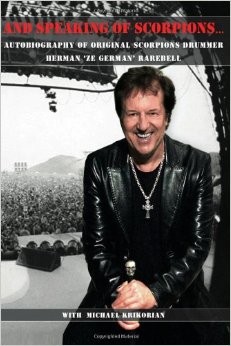 And Speaking of Scorpions is the autobiography from Scorpions drummer Herman Rarebell, co-written by Michael Krikorian.

With some of the biggest classic hard rock hits of all time, the Scorpions rank amongst the most legendary bands in the world. It was in the latter half of the 1970s that the band was joined by their classic drummer, Herman Rarebell. Rarebell’s participation with the band was one of the major catalysts towards reaching international status; it was the version of the band with Rarebell that would go on to record hits like “No One Like You,” “The Zoo”, “Rock You Like a Hurricane,” and “Big City Nights.” Even after his departure from the Scorps in the mid 90s, he has remained a busy man.

And Speaking of Scorpions is Herman Rarebell’s official biography, co-written by Michael Krikorian. In this book you will get to read about Rarebell’s early life, including his musical education, and his earliest rock and roll endeavors, both in Germany and the United Kingdom. The story continues to a chance meeting with Michael Schenker that would lead to him being a member of the Scorpions for nearly two decades, appearing on the band’s most iconic songs and touring the world on multiple occasions, including an appearance in the Soviet Union in the latter 1980s prior to the fall of the USSR. Things continue beyond the band, as he would pursue running a record label and organizing other tours and projects in the musical world.

Herman Rarebell’s life has been one of the most interesting in the music industry, with several decades worth of musical experiences and the like. For the most part, And Speaking of Scorpions is a triumph that accomplishes what it aims to deliver, giving the reader a portrait of one of the most iconic rock and rollers out there.

One thing worth mentioning here is the overall tone throughout the book; Rarebell is a witty man and there are comical quips on almost every page. This is almost overkill at times, but it definitely gave this book a different tone from any other I have ever read, and made it all the more memorable. The chapters tend to be just the right length; only a few are excessively long, and only when necessary. The details cover the story and then some, allowing any fan of Rarebell to learn whatever they may want to know about this rock legend. While the focus is primarily on the Scorpions, things like the Herman Ze German solo album from the mid 1980s are not omitted either. You learn plenty about Rarebell’s life in the studio, on the road, and at home alike, plus what inspired several of the band’s most classic songs (and some of the stories behind these iconic hits are not what you would expect!)

The book is not perfect, however. One of the biggest issues is that there is a very amateurish look throughout the book, with some grammatical and punctuation errors; I suspect this may have been released through a self-publishing company despite Rarebell having a co-author. The biggest problem I had with the book, however, is that there is next to nothing in regards to Rarebell’s post-Scorpions life. One of the most interesting points of his career is that he founded a record label with Prince Albert of Monaco following his departure from the Scorpions; this is barely mentioned or touched upon at all here. This fan would gladly pay for a book that focused exclusively upon Rarebell’s post-Scorps exploits, including that record label and his more recent tours and such (he is currently playing in Michael Schenker’s Temple of Rock solo band). Let us hope that Rarebell eventually decides to release a follow-up book.

The book has some problems, but as a die-hard fan of everything Rarebell has ever done, in and out of the Scorps alike, I have no problem recommending it despite the minor flaws. This is reading material well worth getting your hands on if you are a fan of Herman Rarebell and/or the Scorpions.

Avengers: Age of Ultron - The Avengers ...