Home›Reviews›Live After Death - Iron Maiden, Live on Stage on the 1985 World Slavery Tour!

Live After Death - Iron Maiden, Live on Stage on the 1985 World Slavery Tour! 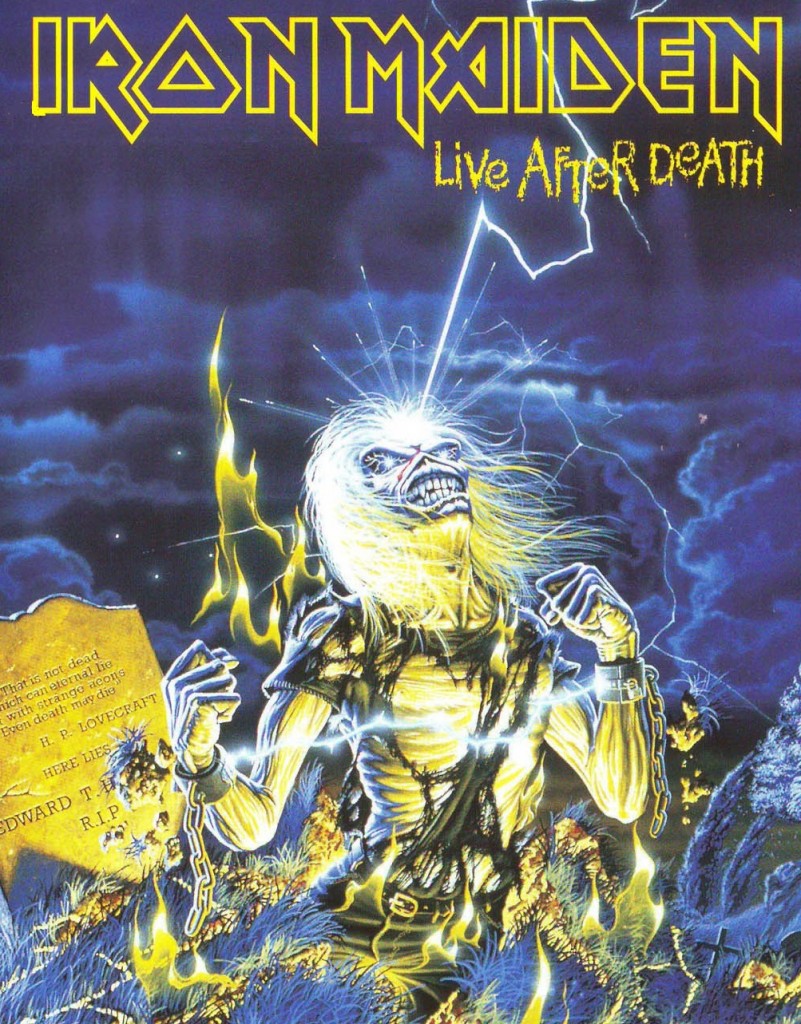 Live After Death is a home video release from Iron Maiden, chronicling a 1985 live performance at the Long Beach Arena.

In 1985, Iron Maiden was at their all-time peak, touring every corner of the globe amidst the World Slavery Tour. Promoting Powerslave, which was their then most recent studio album, the band continued to garner a global fanbase. This was the band at their purest epic hard rock sound, before integrating keyboards and synthesizers into their music on the forthcoming records. Thus, in some ways, the World Slavery Tour marked the end of an era for England’s legendary heavy metal band.

Live After Death was released on VHS many years ago and was only available on DVD as a bootleg prior to this legitimate release. For this album, the band was comprised of its most classic and legendary lineup, with Bruce Dickinson on vocals, Adrian Smith and Dave Murray on guitar, Steve Harris on bass, and Nicko McBrain on drums. For this tour, the band had their most elaborate on stage production to the time, with massive, Egyptian-style landmarks, the likes of which the concert-going public had never experienced before. Maiden’s prior live shows were a hit with their fans, but this is the series of shows that turned them into an iconic, legendary live band.

The band spares no expense on the theatrics when it comes to the live show chronicled on this disc, filmed at the Long Beach Arena. The combination of Egyptian landmarks and Iron Maiden’s most epic and legendary tracks, done up in a live setting, makes this show a sight to behold for anyone that calls themselves a fan of the band. When this show is going, you do not want to take your eyes away from the screen. This is Maiden in their prime, and the setlist, while heavy on tracks from the then-recent Powerslave, also encapsulates a number of deep tracks from the prior records which would not surface on later live recordings from the band. We even get a full-length live version of the 13-minute epic “Rime of the Ancient Mariner!” The setlist, the performance, and the on-stage theatrics alone make this one of the best home video live releases Iron Maiden has ever done.

Of course, in recent years, Iron Maiden has not been skimping on additional features when it comes to their home video releases, and Live After Death is no exception. The promo videos from the Powerslave album are included, as well as the band’s Rock in Rio performance from 1985, a documentary showing the band playing in Poland amidst the Cold War era, and a series of artwork galleries from the album and the respective tour. The real highlight here, of course, is the continuation of the History of Iron Maiden documentary, covering the making of the Powerslave record and embarking upon the World Slavery Tour, creating Live After Death in the process. The concert itself would have been worth the price of admission, but this entire extra disc’s worth of material is the Holy Grail for any Maiden fan.

Iron Maiden has no shortage of home video releases, and picking out the right one(s) to buy can be a challenge. As far as the vintage concert releases go, this one is the undisputed champion (sadly, no vintage Maiden concerts are available on Blu-ray yet). If you are a die-hard Maiden fan, chances are you already own all of their videos, but if you were to only get one of the DVDs that chronicles a classic concert, this would be an excellent choice. Absolute highest recommendation for fans!

Avengers: Age of Ultron - The Avengers ...

Rock in Rio Kicks Off This Weekend ...