Home›Reviews›Out of the Palace and Into the City of Sin! Krokus at Vamp'd

Out of the Palace and Into the City of Sin! Krokus at Vamp'd 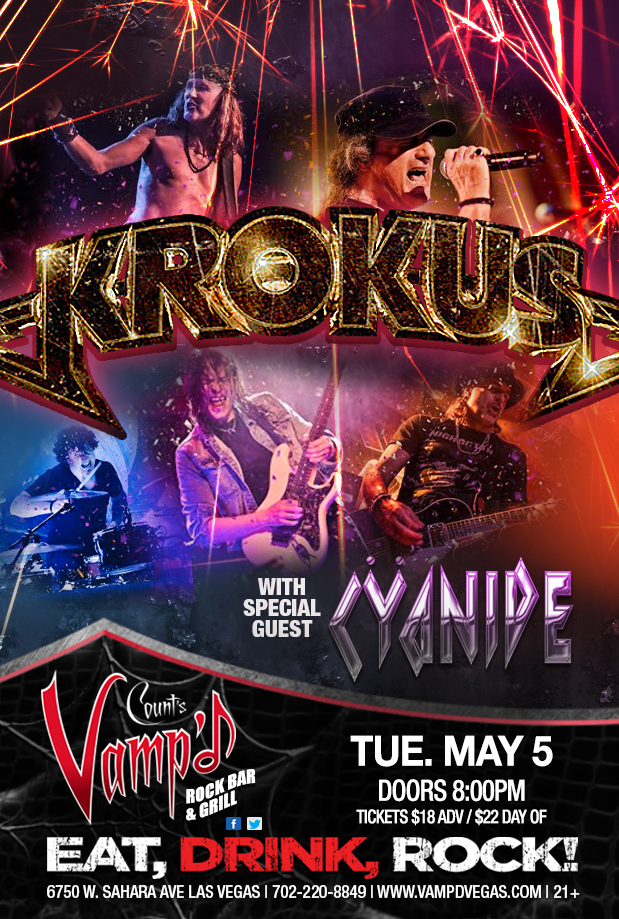 Krokus played Vamp'd on Tuesday, May 5, 2015. Local favorites Cyanide kicked off the evening.

It is hard to believe that it has been 25 years since Krokus last embarked on a large scale tour of the United States. This Swiss hard rock band has been going strong since the latter half of the 1970s, though it was the arrival of vocalist Marc Storace in 1980 that would result in the band eventually gaining their greatest commercial successes, with classic hits like “Heatstrokes,” “Long Stick Goes Boom,” “Headhunter,” “Eat the Rich,” “Screaming in the Night,” “Midnite Maniac,” and “Our Love.” Fans in America were ecstatic to find out the group would be doing a few shows in the States in 2015.

The current lineup of Krokus features Chris Von Rohr, Fernando Von Arb, Marc Storace, Mandy Meyer, Mark Kohler, and Flavio Mezzodi. However, Von Arb and Kohler were not present for this American leg of the tour; Dominique Favez filled in as an additional guitarist, making the band a five piece for these dates (rather than six, as their “main” lineup is today). It was disappointing to see two major members out of the fold for the American dates, but Vegas rock fans were likely happy to be able to see the band at all in some shape or form. 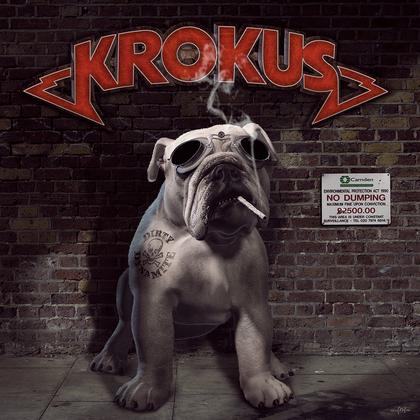 Dirty Dynamite, released in 2013, is the band's newest studio album.

Krokus has kept busy in recent years; their latest studio album, Dirty Dynamite, was released in 2013, and a new live album, Long Stick Goes Boom: Live from da House of Rust, came out in 2014. In recent years, Vamp’d has done an excellent job booking big name international bands from the Decade of Decadence, and Krokus marks a major addition to that ever-growing roster of bands to play Danny “The Count” Koker’s Vegas rock house. 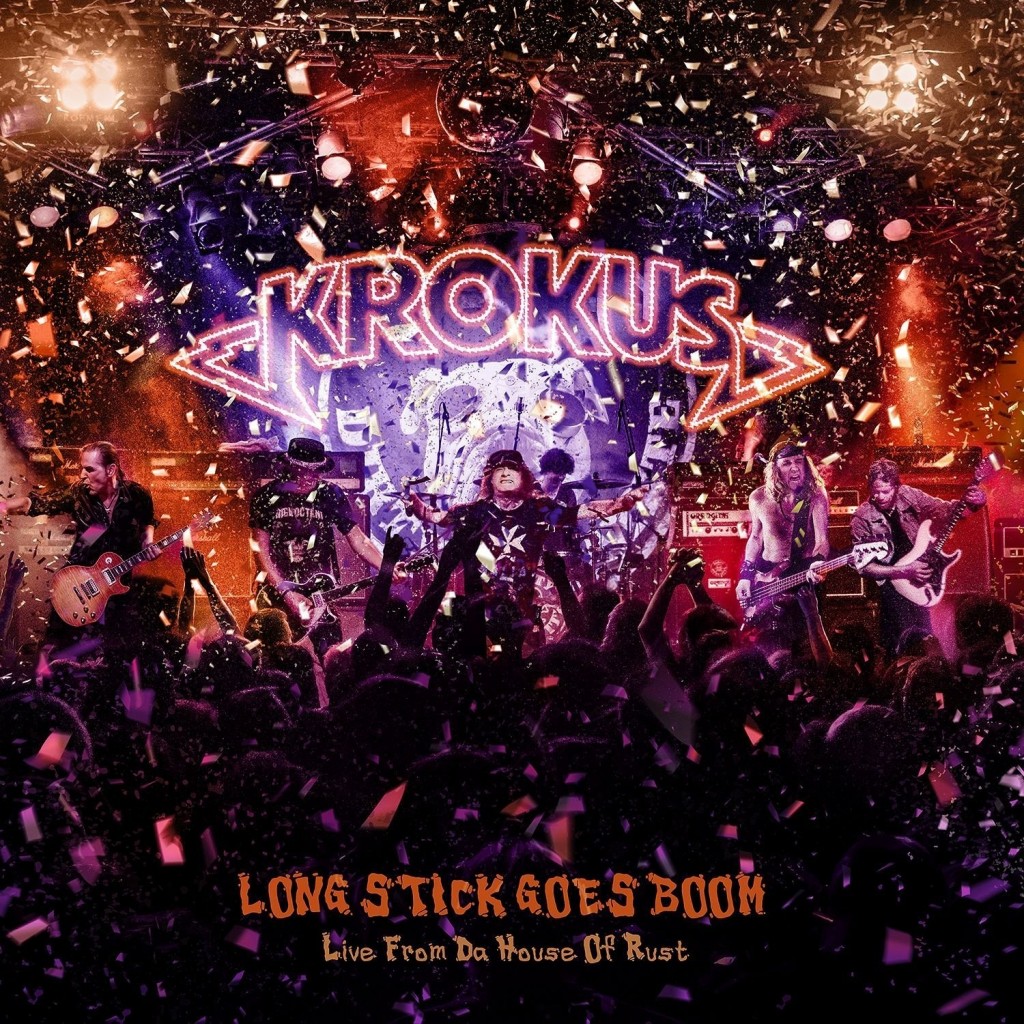 The opening set with Cyanide was fantastic as usual. Robert Hussey and company deserve major credit for keeping alive a sound that is true to the 80s Sunset Strip glam rock scene; they have expertly composed and performed new tunes that sound like they could easily have come from one of the 80s scene's biggest bands. Their debut album, Lethal Dose, just came out earlier this year after many delays, and is well worth picking up if you do not own it yet.

Ever since it was announced, this was one of my most eagerly awaited shows of the year at Vamp’d. If you had told me a year ago that Krokus was going to be playing Vamp’d, or even in Vegas at all for that matter, it is not likely I would have believed you. Overall, the Swiss rockers gave the audience a solid performance that impressed the fans, though one that was not without its shortcomings.

The first issue that needs to be addressed here is the setlist. The band definitely covered the majority of the highlights from their 1980-1983 hard rock peak. Yet, for some ungodly reason, they criminally ignored The Blitz, their 1984 album that gave us classic hits like “Our Love,” “Midnite Maniac,” and their classic cover of Sweet's “Ballroom Blitz.” It has been said that the band dislikes this album because it is a commercial attempt and they have regrets about recording it, but the fact of the matter is that it is a great record, and it is blasphemous that they did not play a single one of the classic cuts from that album. Instead, of these tracks, some of the fare that we got included a terrible cover of the Guess Who’s “American Woman,” and a rather unexpected cover of Bob Dylan’s “Quinn the Eskimo.” The latter of the two was surprisingly good in heavy metal form, but in the place of the classic hits from The Blitz? No thank you! However, the newer songs the band had in the setlist were surprisingly good, and definitely true to their classic sound. Any fan can nitpick the setlist to some degree, but these are my major qualms and the ones that will be the most relevant to fans going to a show to hear “the hits.” 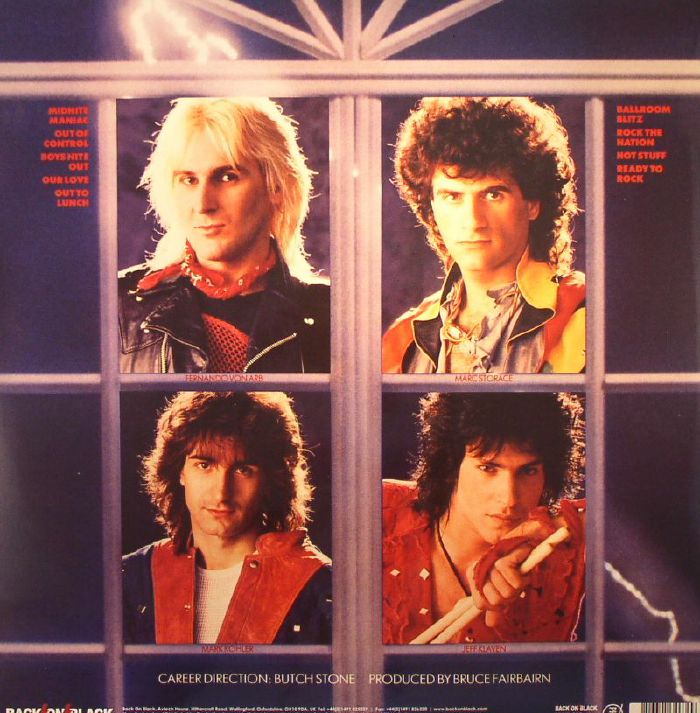 The Blitz, released in 1984, is amongst the best records in the entire Krokus catalogue.... yet the band criminally neglected it in this 75 minute set.

Some fans have attacked the band's set for only being 75 minutes long. This is one area where I disagree, however. For a small venue rock show like this, 75 minutes is just about right. This is not an epic stage show with insane theatrics and over the top pyrotechnics, nor was it ever intended to be. In a venue like this, 75 minutes of straight up rock gets the job done and then some.

Throughout the show, the performance was very entertaining, with the band members displaying no shortage of energy. Most of the classics and new songs alike were performed in faithful, hard and heavy renditions that did justice to their album counterparts, though I cannot help but wonder if the show would have been better with Von Arb and Kohler present. That said, the guitarists present did not disappoint. In terms of the actual performance, the only major issues I had stemmed from Storace being unable to hit the higher notes on some of the older songs, something painfully evident during the encore of “Headhunter.” (Fortunately, very few of the songs performed actually had high notes in them originally.) There were also moments, particularly during the encores, where the guitars seemed way too high in the mix, with Storace’s vocals being buried as a result. Any shortcomings in these regards were minor, though; the songs sounded very good from start to finish.

It is true that I had some issues with this performance, but that should not give fans the wrong idea. This is a rare chance to catch a band in concert that has not toured America in 25 years. The good outweighs the bad here; many fans will not even care about the issues I have mentioned . If the band comes to your town during this American tour and the price is right, lay down the money for a ticket. Who knows when they’ll be back in the States after this?

Steve Summers - The Voice of Pretty ...