Memorial Day weekend is usually associated with family vacations, barbeques, and time to appreciate the service our veterans provide; and while we still appreciate their service, there's a calling that takes people away from their families to join their other family; their Punk family. For years Downtown Las Vegas has been over-run by mohawks, studs, and patches on Memorial Day Weekend, but instead of gathering around a barbeque pit we congregate in the circle pits at Punk Rock Bowling.

The mecca festival put on by BYO Records has provided iconic lineups ranging back to bands in the late 60's to now. Besides the three day festival, clubs like Fremont Country Club, Las Vegas Country Saloon, and Backstage Bar and Billiards are taken over at night to keep the energy going until early in the morning with club shows.

With club shows starting on Friday night, what is one to do on Thursday night? You can't just sit around and wait in anticipation for G.B.H tomorrow, and that's IF you were able to get a ticket within the hour of them selling out! Luckily, Punk Rock Bowling Eve was saved by ska gods Streetlight Manifesto; and like their other “Eve” holiday crusader, they came with goodies of horns and chants to give to all the skankin' boys and girls at Fremont Country Club.

The line for the venue was packed! Looking into the crowd you could see a lot of the local kids that come out for the Be Like Max and Hard Pipe Hitters shows, with it being all ages, it may be the only “club” show that the kids get for the entire weekend. 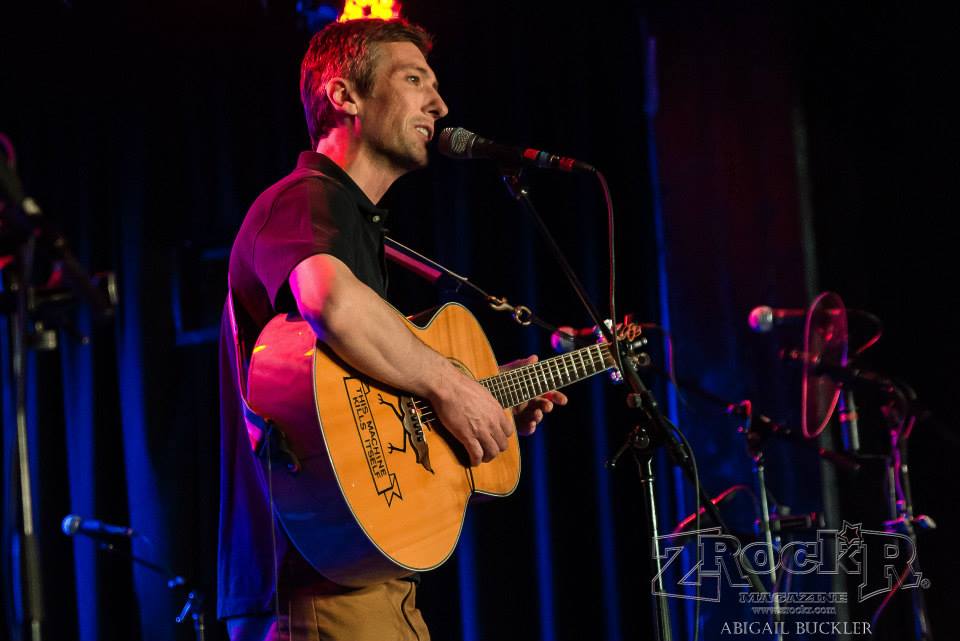 Starting off the night was an unexpected treat with the acoustic set of a beaten down man, Sycamore Smith. With tales about what a whore his mother is and his failed attempt at suicide, it was surprisingly the funniest single person show I have ever seen.

With a kazoo strapped to his neck and devil horns pasted onto the body of his guitar on both sides, Sycamore brought us through some messed up stories, but gave us all a good laugh. That takes talent.

Next was the opener that everyone wanted to see, the singer of UB330, Dan Potthast. Doing a solo acoustic set like Sycamore, Dan played through MU330 tracks like "Raw Fish" and "My Favorite Song", and also some solo tracks like "Don't Say Gay" and a dedicated rebuttal to a crowd heckler that asked for "Freebird"; going on about how assholes that yell from the crowd go home and eat food out of his parents fridge in the suburbs, and eventually grow to be 40 with a desk job that they hate. It was a sophisticated insult that, while planned, was good tune to end the set with. 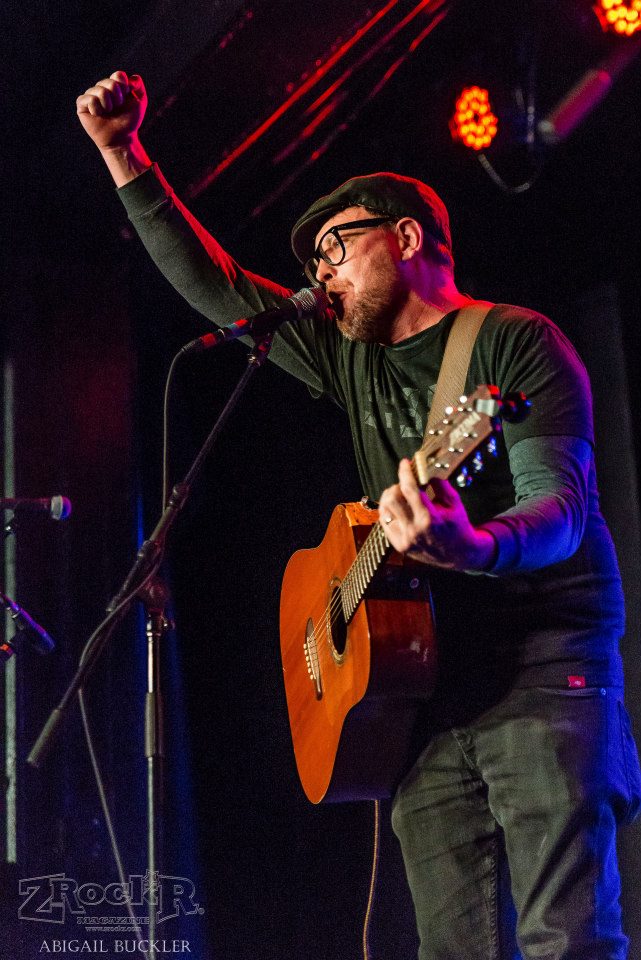 The floor was immediately packed after Dan was done. The air was filled with angst as you could see people starting to wiggle around, getting ready to dance. The background song's beat faded away, the curtains opened, and with a simple drum beat the crowd immediately recognized the opening as "Watch It Crash" from Somewhere in the Between. As the drums built up and the horns rose with them, the movement was immediately forced to the center of the room where the pit opened up to the drop of the song.

There's something about a crowd of a few hundred people chanting the same ting in unison; with the first chant of “Mercy, mercy, mercy me”, hands flew in the air and the voices of the crowd took over the sounds coming form the speakers. The chanting and movement continued through "The Three of Us" and "We Will Fall Together". "Dear Sergio" came up next and turned the already sizable mosh pit into half of the floor dancing and throwing their fist in the air; screaming “Hey, Sergio!” at the top of their lungs along to the chorus.

After a brief silence and a calming from the crowd, the strum of an E chord would lead into the sing-along of "Point/Counterpoint". The settling wouldn't last long, because after the words, “If and when I die won't you bury me alone, cause I'll never get to heaven if I'm singing this song.”, a quick toot from the horns brought the drums and guitars back in, and the crowd went right back it. We were stopped in the middle of the song, where "Point" turns to "Counterpoint", by a palm muted strum and into the title track from Keasbey Knights. A little disappointed that I was stopped from singing my favorite Streetlight Manifesto lyrics, I immediately took my frustration out in the pit with a hard skank; screaming “My, my, my, how the time must fly when you know you're gonna die by the end of the night!”. "Keasbey Knights" ended with some “Hey!” chants from the crowd, the instruments calmed and only the bass was left climbing, bring them back into "Point/Counterpoint", and again the crowd calmed down. The bass reached it's summit and Thomas came back in, singing his cry-out letter to a lost companion; ending it with exclamation, “Fuck it! Thank you! I love you all!”. The duo of songs would stand through the night as the most energetic moments. 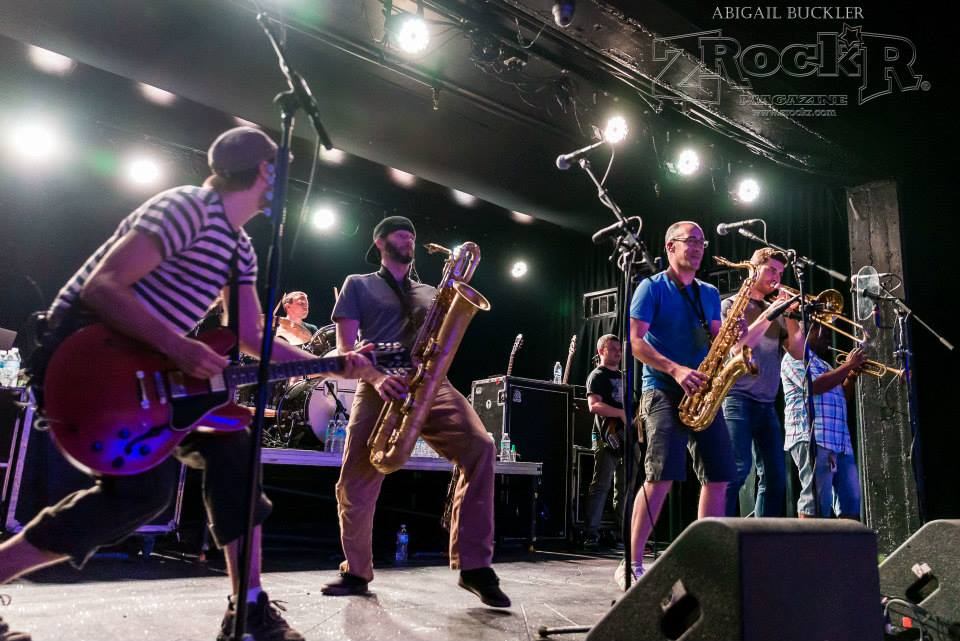 A showcase of their newest album, The Hand That Thieves, would continue the set with the title track from the album, "With Any Sort of Certainty", and "Toe to Toe". Since they are all calmer, acoustic based songs, they was a lot more of a tamed pit with just casual, lazy swaying from the dancers. Followed by the fan favorites "A Moment of Silence" and "A Moment of Violence", the pit would stay calm until the two songs met; when the bouncy lyrics of “How long do you think you can go before you lose it all; before they call your bluff and watch you fall” go from soothing message in “Silence”, to a chaotic scream in “Violence”. As we chanted “How did it come to this!” in "A Better Place, A Better Time", the end of the set was making itself more apparent, and after the title track form Somewhere in the Between they would step off stage. The inevitable encore was a couple of songs off of Everything That Went Numb, "Here's to Life" and "The Big Sleep". "Here's to Life" is such an all-over-the-place track; with a buildup from the horns and drums that leaves no one standing still. "The Big Sleep" is the perfect closer, full of “na na na” chants and blasting drums, behind one of their greatest pieces of writing my ears have had the pleasure to listen to. This, like many Streetlight Manifesto songs, seems to be an innuendo that I'm sure only singer Thomas Kalnoky can explain; but there is so much passion and angst in this song, and screaming “How did it come to this!” with a few hundred other people at the top of your lungs will always make you feel alive.

Tomorrow we will have the club shows, and Saturday we will have the festival; but on this Thursday night in Downtown Las Vegas, the local kids and the early comers got a nice treat to warm them up for the long weekend ahead. With special guesst being at two of the club shows this year, I can't help but speculate that Catch 22 may be a part of it. Zrock'R will have boots on the ground all weekend! Issue 1 coming soon.