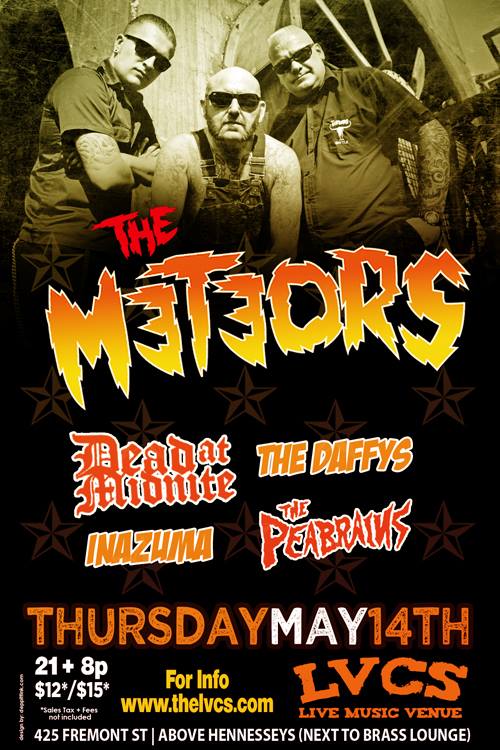 As I walked into LVCS for the first time (since I moved to Vegas in November), I was greeted by a sight I haven't seen since I lived back in California; a good little gathering of psychobilly and punk rockers smoking cigs and drinking the cheapest beer available. I've been just now finding this side of Vegas, and I have to say the people at this event were rough, rowdy, and good hearted people. I got there a bit late, and I'm sure I missed the opening band.

The first band I happened to catch were the Daffys. Not too original but a great sound none the less. Very surfy with heavy shredding and lots of twang and a good danceable but edgy kind of sound. Now mind you, these events aren't really my normal scene, and I was there for one band so I don't have much basis for any bands besides The Meteors.

Next band up was Dead at Midnite, and I must say that they stole the show. They had a very Misfits type sound but mixed with a little more edge and punk rock rebellion and electricity. It seems like they have a good local fan base, which really made the place come alive. From their first song to their last song people were dancing, shaking fists, slamming into one another, and chugging beer in appreciation for the band.

Last, of course, was The Meteors. I've been a fan of them for over 15 years (not die hard, just a fan), and I have to say that live, and after 25+ years of playing, they still sound just as they do on the albums I own. I was pleased to hear "My Kind of Rockin'" and over all had a very great time. It's good to see this scene is still active here and has a good fan base. That's it for now, guys.  See you at the next event! I'll be the long haired ginger at the bar with a camera or beer. Cheers!