Home›Reviews›Appice Drum Wars - Vinny and Carmine Bring the Thunder to the City of Sin!

Appice Drum Wars - Vinny and Carmine Bring the Thunder to the City of Sin! 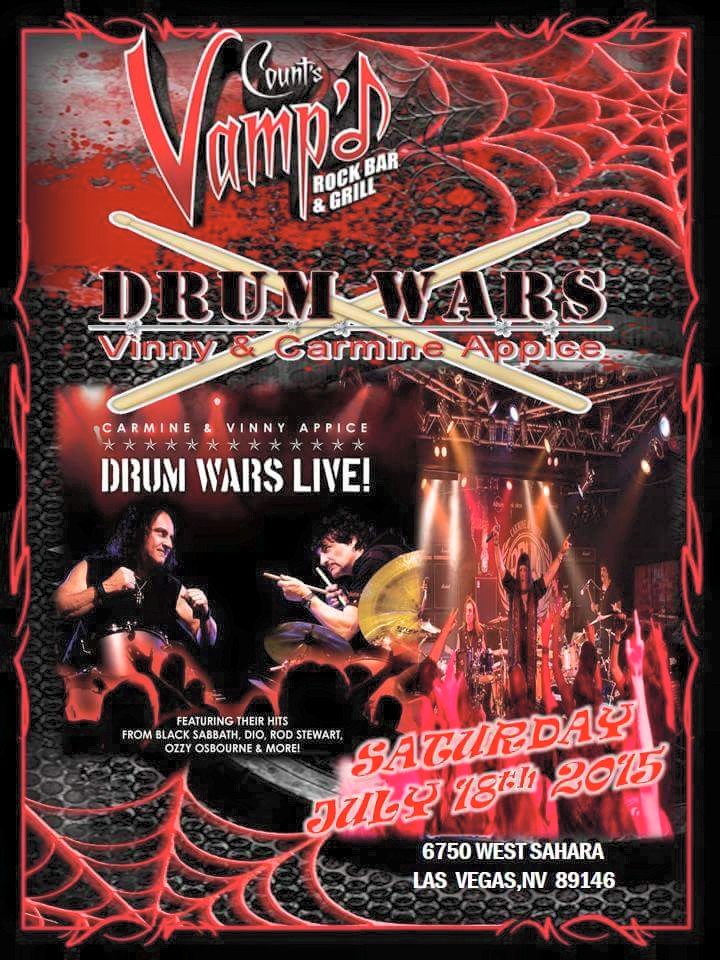 For the past several years now, Appice Drum Wars has been an entertaining rock show that there is nothing else quite like. Combining the talents of brothers Carmine Appice (Vanilla Fudge, Cactus, Rod Stewart, Ozzy Osbourne, King Kobra, Blue Murder) and Vinny Appice (Axis, Black Sabbath, Dio, WWIII) and an all-star revolving door lineup of musicians, these badass drummer brothers have continued to thoroughly rock the world and entertain audiences. 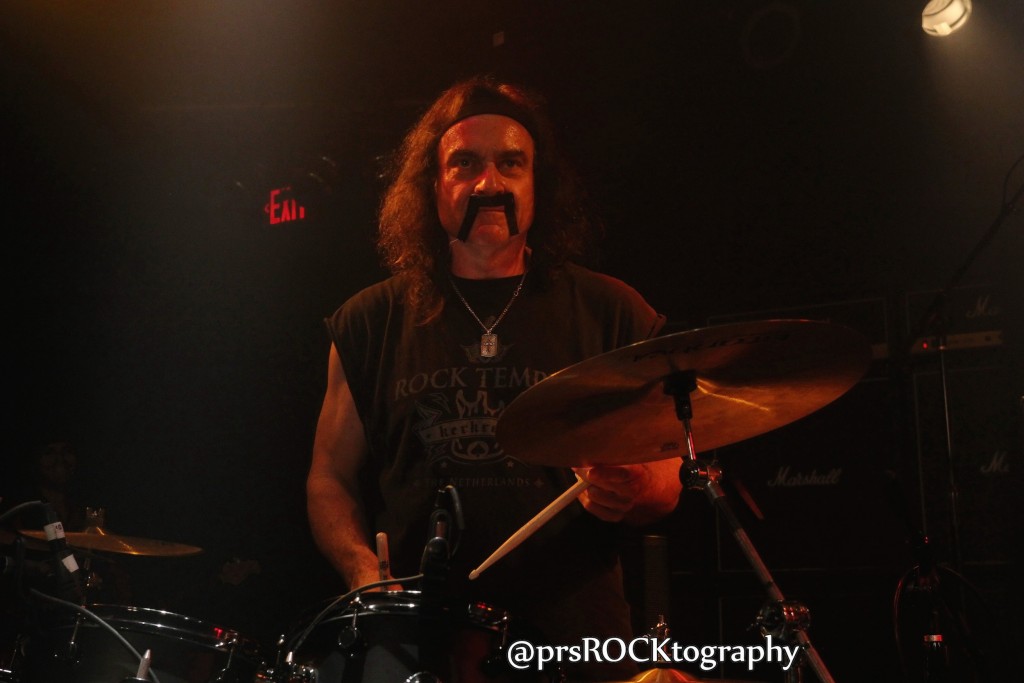 The humor at an Appice Drum Wars show is half the fun! The picture here speaks for itself.

For this particular set of shows, the Brothers Appice have been joined by bassist Phil Soussan (Ozzy Osbourne, Beggars and Thieves), guitarist T-Bone Andersson (Steelheart), and vocalist Jim Crean (Hair Nation, and who also has a solo career and his own albums out). Crean performed with the group last year, though the other musicians (aside from the Brothers Appice) are all new to the group. It is not clear if this will continue as a permanent lineup, or if it will continue to change on a yearly basis. 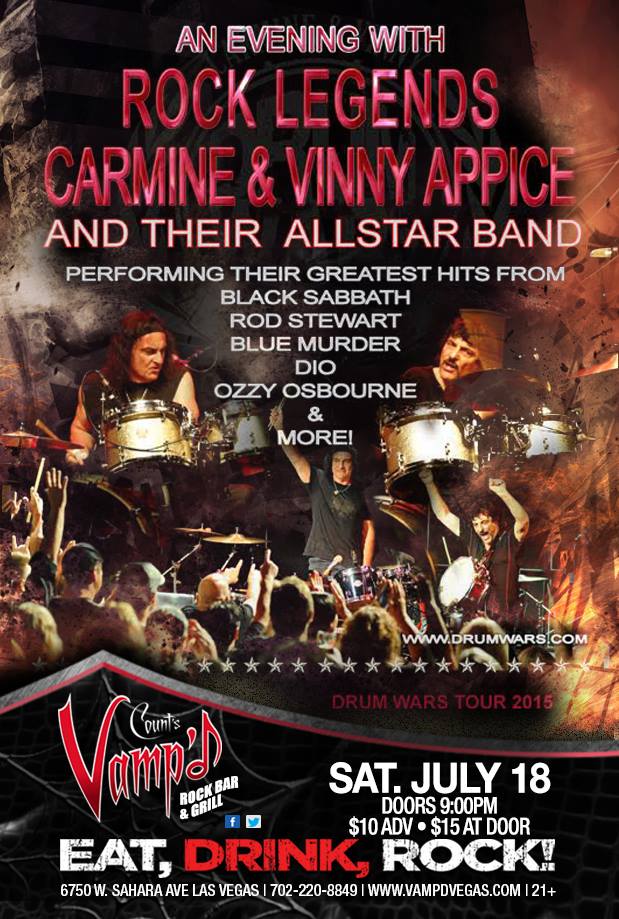 Show ad detailing past bands and ventures of the Brothers Appice.

One complaint that needs to be addressed regarding this show is the late start time and the lack of an opening band. Doors for this show opened at 9:00 PM, and the band did not start until roughly 11:15! Most rock shows in this town have late start times, but this is made more bearable by having an opening/support band on deck. Why could this show not just start earlier and be done earlier, or have a support act? Granted, the massive amount of room on stage occupied by the Appice Brothers’ drum kits did not allow for much maneuvering room for personnel of any kind, and this could have been a factor in the decision not to have a support act. Still, a one-man unplugged show of some sort probably could have worked and killed time for the people that showed up at the “doors open” time. 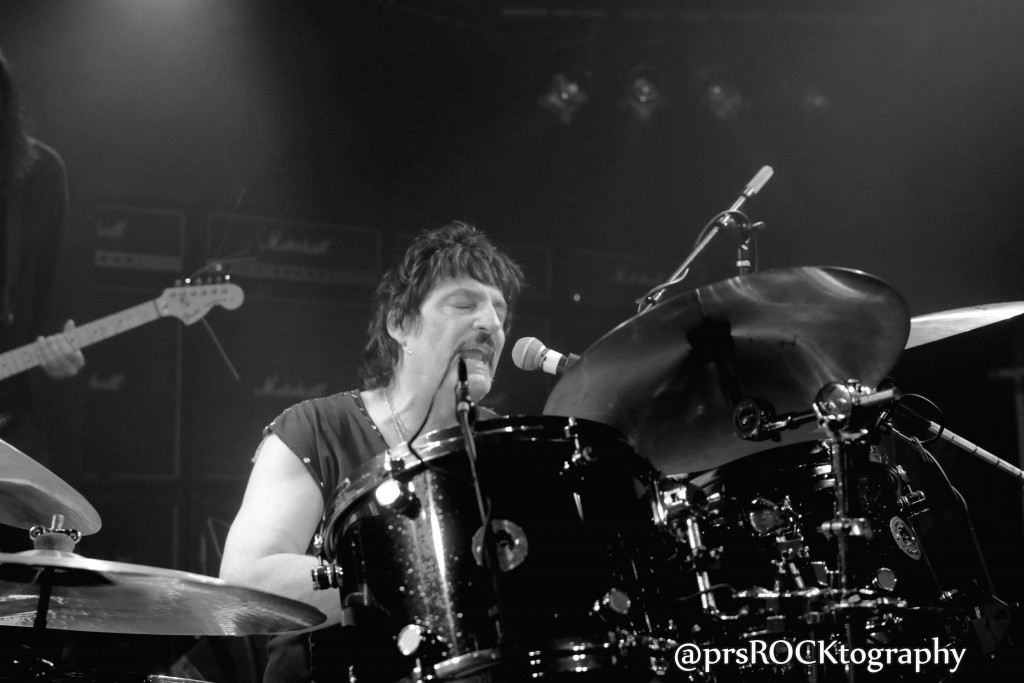 Carmine Appice - even at age 68 he is still one of the best rock drummers in the world.

That said, though, the show itself did not disappoint. If you have ever seen Carmine or Vinny with any band, whether it was with a past Drum Wars show or not, you know how entertaining they can be on a live stage. This show was kicked off with a comedic intro from comedian Carrot Top, who has a long-term residency at the Luxor out here in Vegas. Plenty of special guests were in the audience as well, including Raiding the Rock Vault performers Paul Shortino (Rough Cutt, Quiet Riot), Andrew Freeman (who plays with Vinny Appice in the Last in Line Dio tribute) and Jay Schellen. Even Kyle Kruger, the mastermind behind the forthcoming Hair I Go Again documentary film, was in the house! 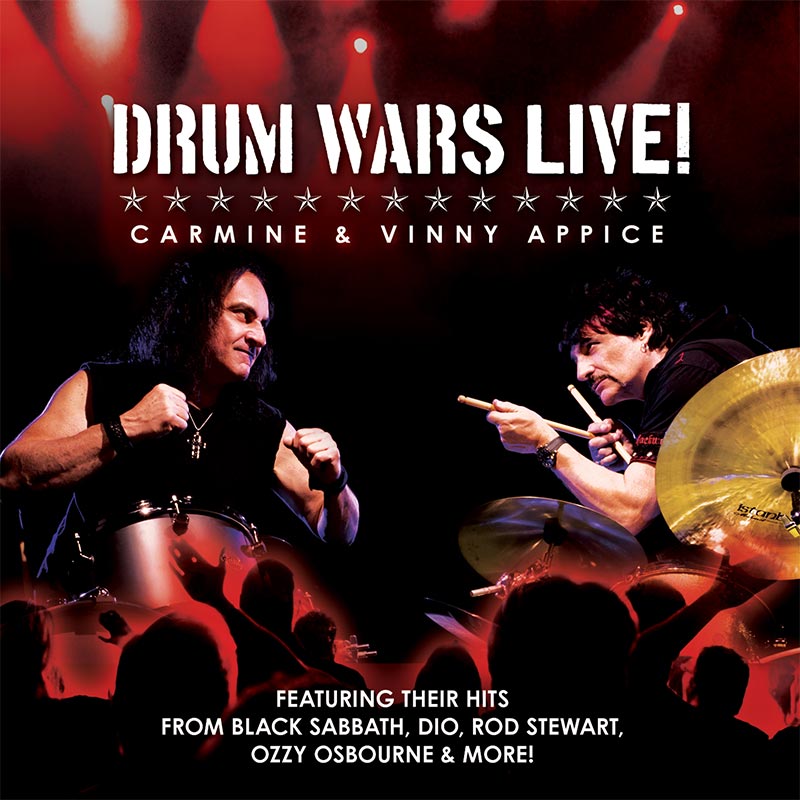 The Drum Wars Live CD was released on November 17, 2014, chronicling one of these live shows in an audio format.

Anyone who has seen a Drum Wars show from the Brothers Appice has an idea of what to expect here. But those who had not previously seen the twosome doing their thing were clearly impressed by what the band had to offer the crowd! These shows are filled with variety, including lengthy solos, many of which have the brothers playing simultaneously, and even tossing sticks to each other mid solo! 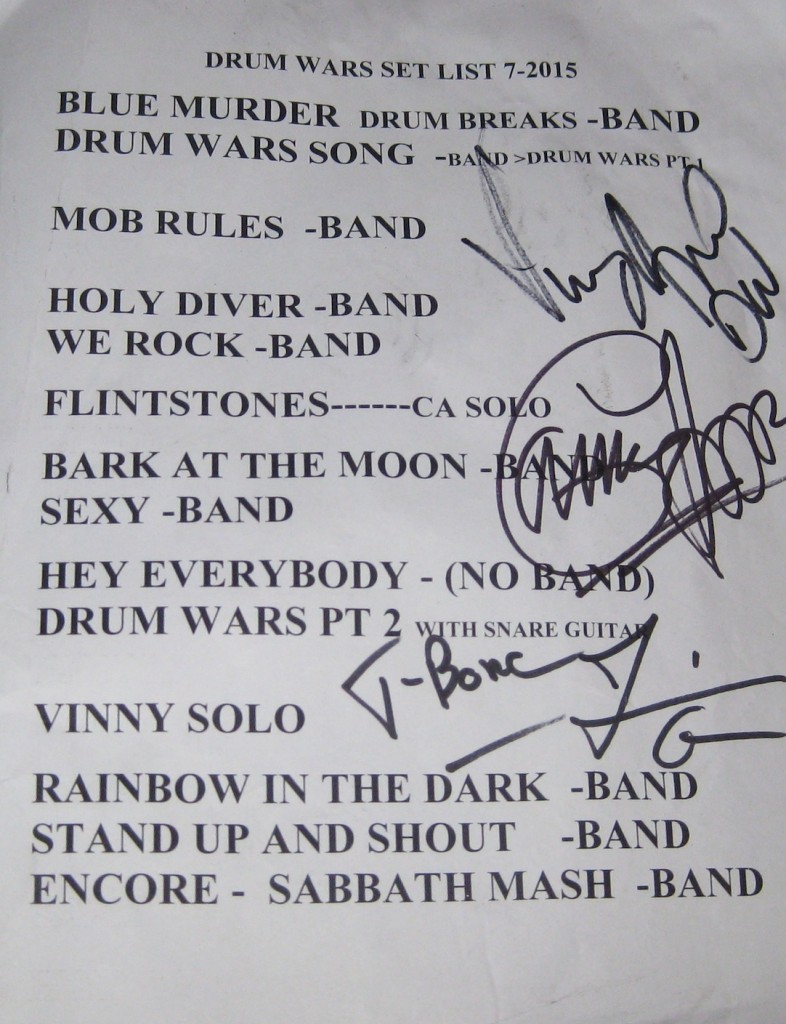 The setlist featured many tracks from the brothers' past bands.

The majority of the tracks featured Jim Crean on vocals, and ran the gamut across both Vinny and Carmine’s careers. We heard tracks including “Blue Murder,” “Mob Rules,” “Holy Diver,” “We Rock,” “Bark at the Moon,” and “Da Ya Think I’m Sexy” (the latter of which was actually co-written by Carmine). The versions of these songs were played superbly by the live band, though as was previously stated, the immense size of the Brothers Appice’s drum kits prohibited the other musicians from making a whole lot of movement around the stage; Andersson and Soussan were more or less relegated to a platform at the back of the performance area. Some have questioned the decision to hire Jim Crean as vocalist for these shows, but I personally applaud the group for getting a vocalist that is not simply a copycat of Ozzy Osbourne or Ronnie James Dio, and can put their own spin on the songs. Angel vocalist Frank DiMino joined the brothers on stage for a few of the cuts, splitting vocal duties with Crean. 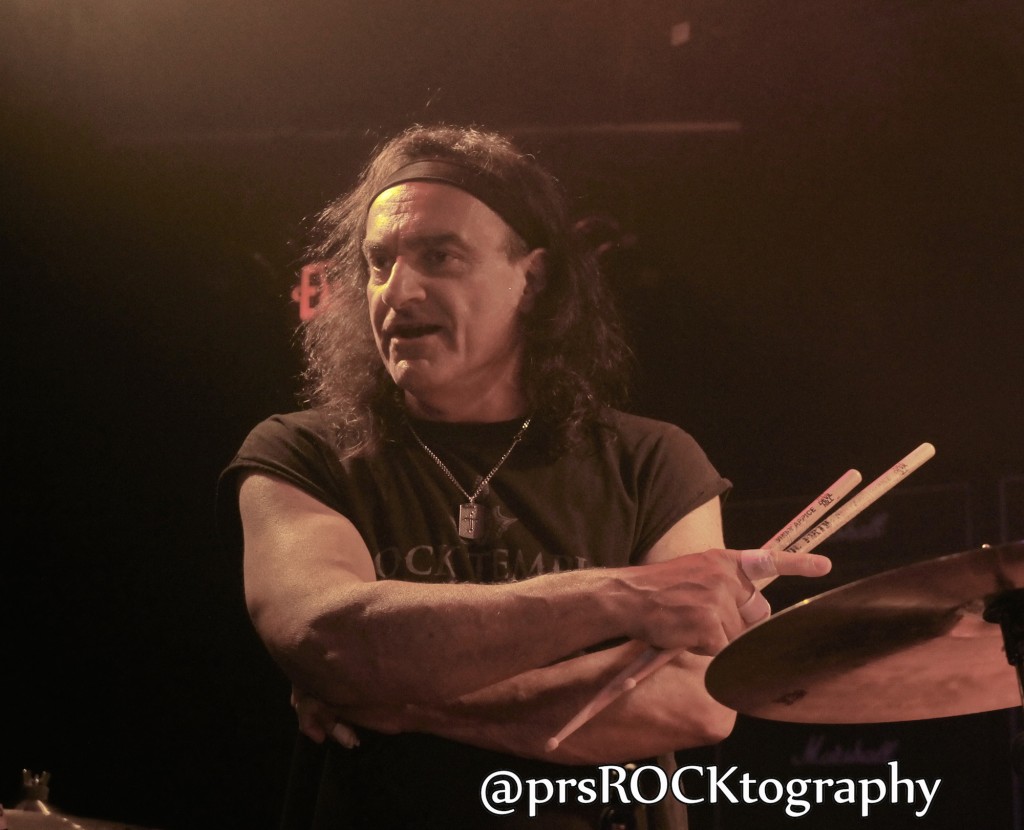 If I have one minor complaint with an otherwise epic and intense show, it was that a few eras from the drummer’s respective careers were overlooked. In Carmine’s case, I would loved to have heard at least one Vanilla Fudge or Cactus song, or even something from the classic Beck Bogert Appice record. Vinny’s career seemed to have more emphasis, namely his work with Ronnie James Dio. In the case of the Ozzy Osbourne material due to Carmine’s involvement with him, we got “Bark at the Moon” and a Black Sabbath medley. Personally, I feel the latter would have been better off replaced by an Osbourne solo hit Carmine played in concert back in the day, like “Crazy Train” or “I Don’t Know.” Still, these complaints are minor in the grand scheme of things.

Appice Drum Wars shows are always a blast, and this was no exception. It was one of the best ones so far, and Southern Nevada rockers were clearly entertained by this display of talent and antics on stage. Naturally, if you are a fan of either or both of these guys, attending one of the shows is highly recommended!

Ant-Man - An Insect-Sized Installment in the ...