Home›Reviews›Doors Live at the Bowl '68 - The Doors Live on Blu-ray Disc!

Doors Live at the Bowl '68 - The Doors Live on Blu-ray Disc! 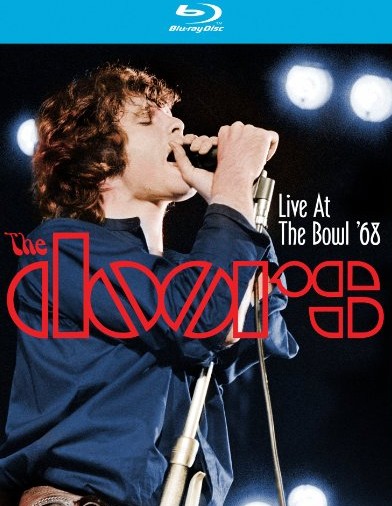 Live at the Bowl '68 is a home video release of a vintage Doors concert at the legendary Hollywood Bowl.

No one can deny that the Doors played a major impact in the world of rock and roll in the latter half of the 1960s and early 1970s. Despite only recording six studio albums with Jim Morrison at the helm prior to his unfortunate passing in July of 1971, the group maintains a reputation as one of classic rock’s all-time great bands. In 2013 keyboardist Ray Manzarek passed away, leaving guitarist Robby Krieger and drummer John Densmore as the only two surviving members.

Of course, the band was as controversial as they were musically talented, due in no small part to their iconic and rebellious frontman. Morrison’s antics got the band banned from The Ed Sullivan Show, earned them the ire of many public decency groups, and even got Morrison arrested for exposing himself on stage! There were only four years of actual Doors music recorded and played on stage with Jim Morrison, but in that brief window of time, they were the band everyone had their eye on, for better or for worse. Over 40 years after Morrison’s passing, they remain one of the most popular classic rock bands of all time.

The disbandment of the band has not meant the end of new releases from the group. In particular, Eagle Rock has been keeping busy putting out a number of new Doors DVD and Blu-ray Disc releases. This release features one of the band’s most iconic concerts ever caught on film, which took place at the legendary Hollywood Bowl venue. For Doors fans, is this a concert that is worth picking up on home video?

Essentially, this is the band after three album releases, well on their way to rock stardom. It captures them right in the middle of their all too brief career, on stage, doing what they do best and playing a wide variety of songs from their catalogue. The concert itself is roughly 70 minutes, with bonus features on the disc that include documentaries from the band regarding the concert and the venue, and some rare vintage promo videos.

As a die-hard Doors fan, I can honestly say that this is one of the best and most iconic shows that the band ever played. Fans of the group are going to agree that this is an essential release. The musicianship is solid and tight throughout, though it is also very clear from start to finish that Jim Morrison was not exactly in a sober state of mind when the show was filmed; one can only imagine what he smoked or ingested prior to the performance. Fortunately, this surprisingly does not negatively impact the concert too much, though some of the sequences here and there are quite laughable for those very reasons. Fans of the group will be all the more eager to experience it, though.

The picture quality on this disc is surprisingly good given the age and nature of the material, though a few shots/angles do look quite soft. Based on what is said in some of the interviews on the disc, and some of the angles/shots/etc., I would guess that this was originally shot in a “full frame” aspect ratio and cropped to fit widescreen televisions. For the most part this is not a problem, but there are a few shots where things feel very “tight” and “cramped.” Audio does not disappoint; the songs are loud, clear, and sound great; Eagle Rock rarely fails to please in this category!

The Doors are amongst classic rock’s most iconic bands, and you will be able to see everything that made the group great (and infamous!) on a live stage in Live at the Bowl ’68. This Blu-ray Disc comes strongly recommended to all fans of the band.