Home›Reviews›Kanan: The Last Padawan - Marvel Strikes Back with Another Superb Star Wars Comic!

Kanan: The Last Padawan - Marvel Strikes Back with Another Superb Star Wars Comic! 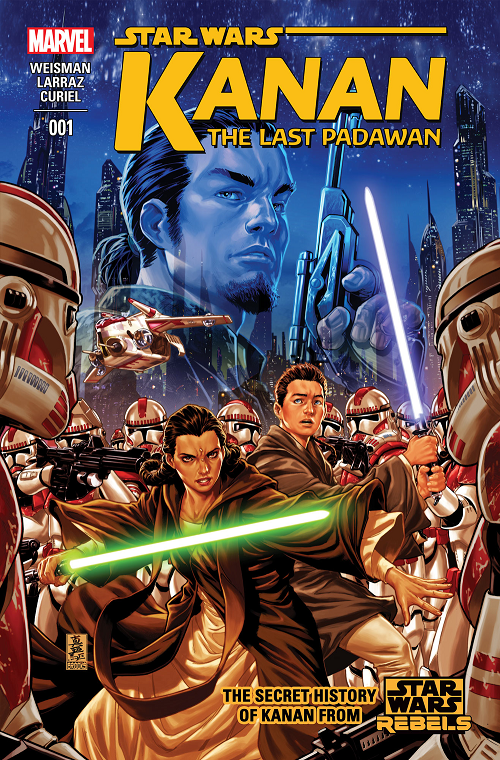 With the release of Star Wars Episode VII: The Force Awakens on the horizon for a theatrical release in December, Star Wars mania is in full swing again. There are no shortage of old fans rediscovering the legendary science fiction franchise, which began with the original 1977 film’s release. Perhaps the most exciting thing leading up to the new film is the fact that Marvel has reclaimed the rights to create Star Wars comics (Marvel had previously made Star Wars comics throughout the 1980s, with Dark Horse Comics holding the rights for the next 20 years or so).

Kanan: The Last Padawan is the latest in the ongoing series of Marvel Star Wars comics. With Disney’s takeover of Star Wars, all former Expanded Universe stories/novels/games/comics/etc. have been rendered non-canon, rebranded under the Star Wars Legends banner. All future work in the franchise, including the Marvel comic books, will be canon from here on out. This is the fourth in the new series of Star Wars Marvel comics, following Star Wars (the comic), Darth Vader, and Princess Leia. A new Lando comic series has since begun as well, with a Chewbacca one slated for release later this year, as well as some others that will lead more directly into Episode VII. 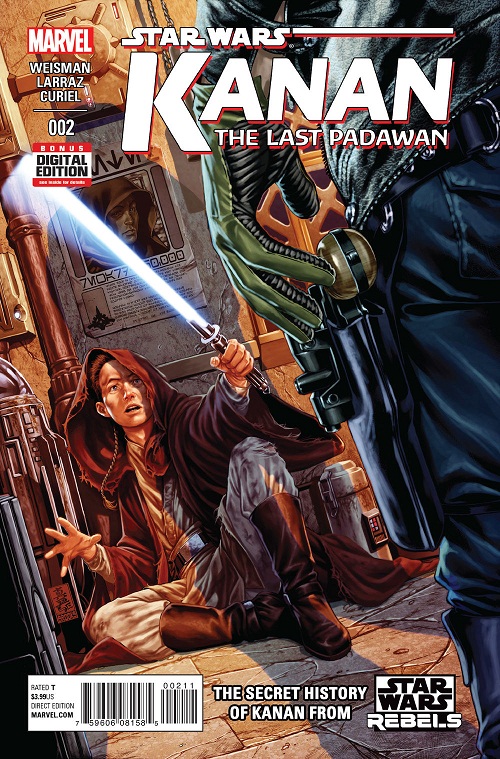 Kanan Jarrus is a character in the CGI animated television series, Star Wars Rebels (I admit that, despite being a die-hard Star Wars fan, as of this writing I have not yet watched the show. However enjoying this series does NOT require knowledge of the series/character). Back in his younger years, Kanan was a Jedi Padawan learner assigned to a master as he embarked upon his training to become a full-fledged Jedi Knight. Unfortunately, things did not work out the way he was planning. With Emperor Palpatine declaring Order 66, all Clone Troopers turned on the Jedi and murdered them, believing them to be traitors to the Galactic Republic. Young Kanan, still known as Caleb Dume at the time, was forced to retreat to save his own life, with his former Clone Trooper allies hot on his trail. Young Kanan’s retreat leads him right into the hands of criminals and smugglers, with whom he is forced to enter into an uneasy and uncertain alliance, just to survive. All the while he finds himself struggling not only to escape his pursuers, but also learning who he can and cannot trust in a galaxy turned upside down amidst the formation of the Galactic Empire.

For the most part, Marvel has been on a roll with their new Star Wars comics. Star Wars (the comic) and Darth Vader beautifully captured the feel of the Classic Trilogy, and nailed the personalities of the characters perfectly. Princess Leia got off to a slow start, but was redeemed in its latter issues. Even Lando, with just one issue under his belt, is getting underway in fine form. Kanan manages to stand as another strong series, substantially distanced in the Star Wars timeline from the other series (the others so far are set between A New Hope and The Empire Strikes Back) whereas this one takes place in the immediate aftermath of Revenge of the Sith, amidst the formation of the Galactic Empire and the Great Jedi Purge. 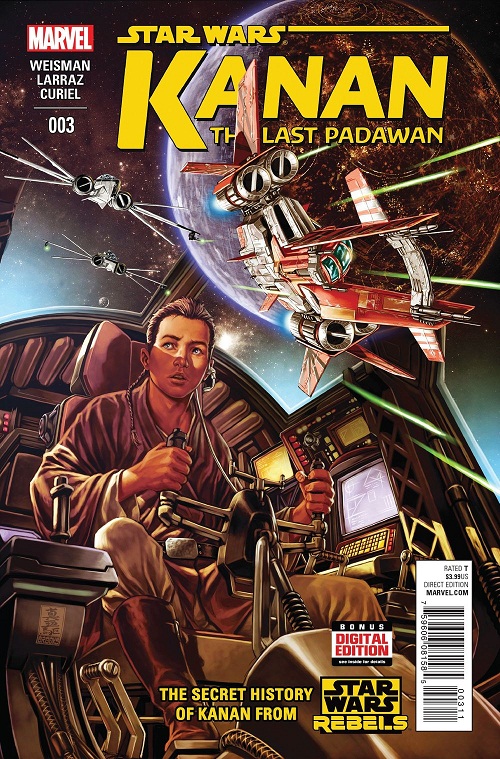 While I would not call this my favorite of the new Star Wars comic series (Darth Vader currently holds that accolade in the eyes of this fan) it stands strong and creates a gripping, involving storyline that is radically different from the other comics Marvel is doing in the Galaxy Far, Far Away. Seeing a former Jedi Knight in training reduced to common thievery in his effort just to survive and stay hidden makes for some interesting reading. Like the other comics, the art style is solid as well; all of Marvel’s comics so far have art styles that are distinctive from each other, yet flow well together at the same time. A solid storyline makes Kanan an interesting addition to Marvel’s growing array of Star Wars tales.

It is a damn good time to be a Star Wars fan, with Marvel’s comics being one of the biggest reasons. It seems like the stories are only getting better and more involving over the course of time, and Kanan has proven to be no exception to the rule. Four issues in so far, there have been plenty of gripping twists and turns, and it will be interesting to see where the series goes. Kanan: The Last Padawan is a great addition to the new Star Wars canon, and comes highly recommended to any fan of the franchise!