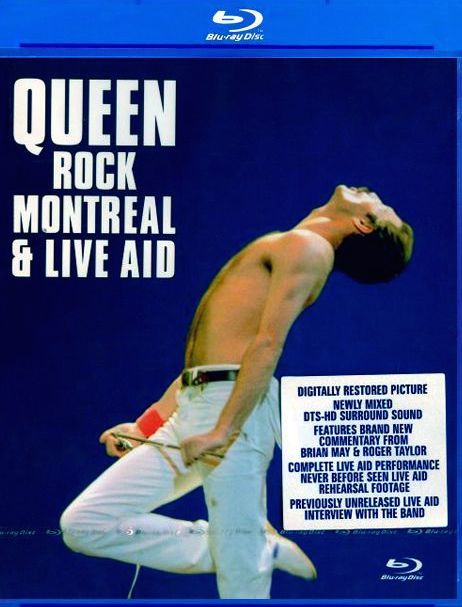 Queen Rock Montreal was released in Blu-ray Disc in 2007 by Eagle Rock. The disc features a classic 1981 performance from the band.

By 1981, Queen had established themselves as one of the biggest bands in the world, a fact undeniable to any rock fan. Following their 70s heyday but prior to their 80s revival, in which keyboards became a regular part of their sound, the band recorded this concert in Montreal, which was professionally filmed. Freddie Mercury, John Deacon, Roger Taylor, and Brian May had accomplished so much prior to this point and would continue to rise over the years. As a legendary classic rock band, the group has had no shortage of home video releases on DVD and Blu-ray Disc. How does Queen Rock Montreal hold up? (Note: This material had been released under the title of We Will Rock You several years earlier prior to the Blu-ray release; the name change for this version of the home video release was most likely to avoid confusion with the musical of the same name, which features Queen songs.)

As was previously stated, this is a classic 1981 concert from the band, professionally filmed in Montreal. The group performs a setlist comprised of songs from nearly every album that had been released up to the time, including hits like Killer Queen, Somebody to Love, and Bohemian Rhapsody, but also features deep cuts including Let Me Entertain You, Save Me, and Dragon Attack. The band’s performance in this massive, impressive venue is beautifully supplemented by a fair share of pyrotechnic work as well. All four members of the band get a chance to shine throughout the performance.

The setlist is comprised of the following songs:
"We Will Rock You" (concert opening version)
"Let Me Entertain You"
"Play the Game"
"Somebody to Love"
"Killer Queen"
"I'm in Love with My Car"
"Get Down, Make Love"
"Save Me"
"Now I'm Here"
"Dragon Attack"
"Now I'm Here" (reprise)
"Love of My Life”
"Under Pressure"
"Keep Yourself Alive" (with pre-song jam)
“Drum Solo”
“Guitar Solo/Guitar and Drum Duel”
"Crazy Little Thing Called Love"
"Jailhouse Rock"
"Bohemian Rhapsody"
"Tie Your Mother Down"
"Another One Bites the Dust"
"Sheer Heart Attack"
"We Will Rock You"
"We Are the Champions"
"God Save the Queen" (recorded exit music)

If you only buy one Queen home video release, this is the one to get. The band is phenomenal from start to finish; the fact that this takes place immediately before the release of the Hot Space record and the heavy integration of keyboards into the band’s music and live set makes it the end of the band’s first era, in a way. The show rocks hard and there are no dull moments throughout. Freddie Mercury shows us throughout the show why is considered one of rock’s iconic frontmen. A high energy show in an exciting place with one of rock’s most iconic bands in their prime; this is the definitive Queen concert and home video release.

There are countless highlights of this show, including epic live performances, solos, and theatrics that help the show to reign supreme as one of the best the band ever did. The fact that the setlist integrates deep tracks and is not merely a “greatest hits live” show makes it all the more appealing to the Queen die-hards. For this particular fan, the true highlight of the night is Roger Taylor’s drum solo, in which he leaves his traditional drum kit to pound away on some classical style drums! This was a band that always managed to impress their fans, and when you watch this video, it becomes clear as to why the band has so substantial and strong a following, even nearly a quarter century after the passing of Freddie Mercury.

The show was shot on film, which helps it to have much better picture quality than that of a number of vintage live concerts released from the era on home video. The colors are bold and bright and the image clear throughout. There are a few soft moments, and a few that are overly light and dark, but these are to be expected with a concert disc; overall it looks fantastic despite minor flaws. The audio does not falter either; Queen’s music deserves to be heard with the best audio possible, and Eagle Rock’s disc certainly delivers here.

The bonus features are another reason to recommend this disc. The real highlight amongst them is the band’s complete 25-minute Live Aid performance from 1985, filmed some years later at that legendary concert. Sadly, the video quality is not as good as the Rock Montreal show (it was presumably shot on standard grade video tape rather than film) but the band still delivers. Also included are Live Aid rehearsal footage and some television interviews. The main Queen Rock Montreal show even has a feature length audio commentary with Roger Taylor and Brian May, which is essential listening for any fan.

If I have one minor complaint, it is that two tracks that appear on the audio release, "Flash" and "The Hero," are not included here. Presumably the video for these tracks no longer exists, but it would have been nice to have gotten audio only versions as bonus features.

Queen Rock Montreal is by far the best of all of the Queen home videos available. This Blu-ray release from Eagle Rock features solid audio and video, plus the bonus features, including the Live Aid show, are the icing on the cake. A nice mixture of hits and deep tracks makes for the ultimate setlist, and the band is on fire throughout. If you are at all a Queen fan, do not hesitate to add this release to your collection. Absolute highest recommendation!

Moment of Glory - Scorpions with the ...