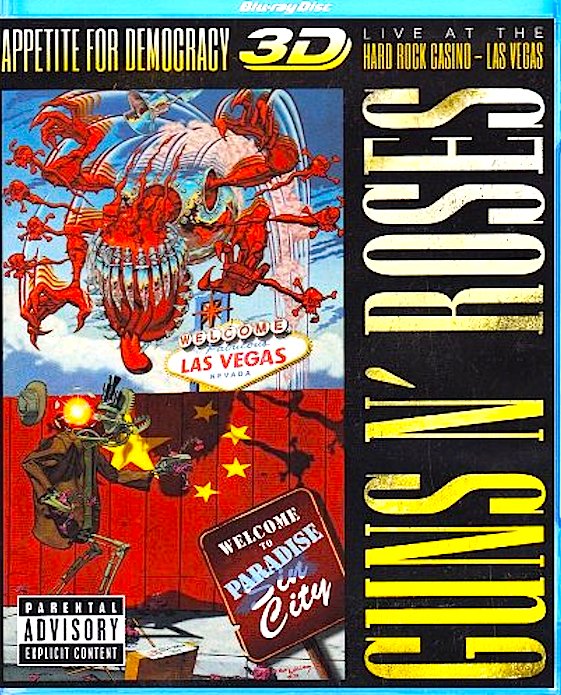 Appetite for Democracy features Guns N Roses during their Las Vegas residency, playing the Joint at the Hard Rock Hotel and Casino.

In 2012, Guns N Roses came to Sin City, performing a residency at the Joint inside the Hard Rock Hotel and Casino. Despite various lineup changes over the years and drama galore, the Guns N Roses name is still strong in the world of rock.

For this release, the band lineup is comprised of Axl Rose, Dizzy Reed, Tommy Stinson, DJ Ashba, Bumblefoot, Richard Fortus, Chris Pitman, and Frank Ferrer. This is the concert that was performed on November 21, 2012. It was given a theatrical release in July of 2014, with the home video release following in November, released on DVD and a hybrid 3D/2D Blu-ray Disc.

For the Guns N Roses residency at the Hard Rock Hotel, the band brought audiences a powerful eight (!) piece band – three guitarists, two keyboardists, one drummer, one bassist, and of course, Mr. Rose himself. With elaborate on stage production combining customized set pieces and stage shows, the band covers all the old classics, along with cuts from the newest Guns N Roses album, Chinese Democracy (which is not that new anymore) and even some unexpected surprise cover songs! 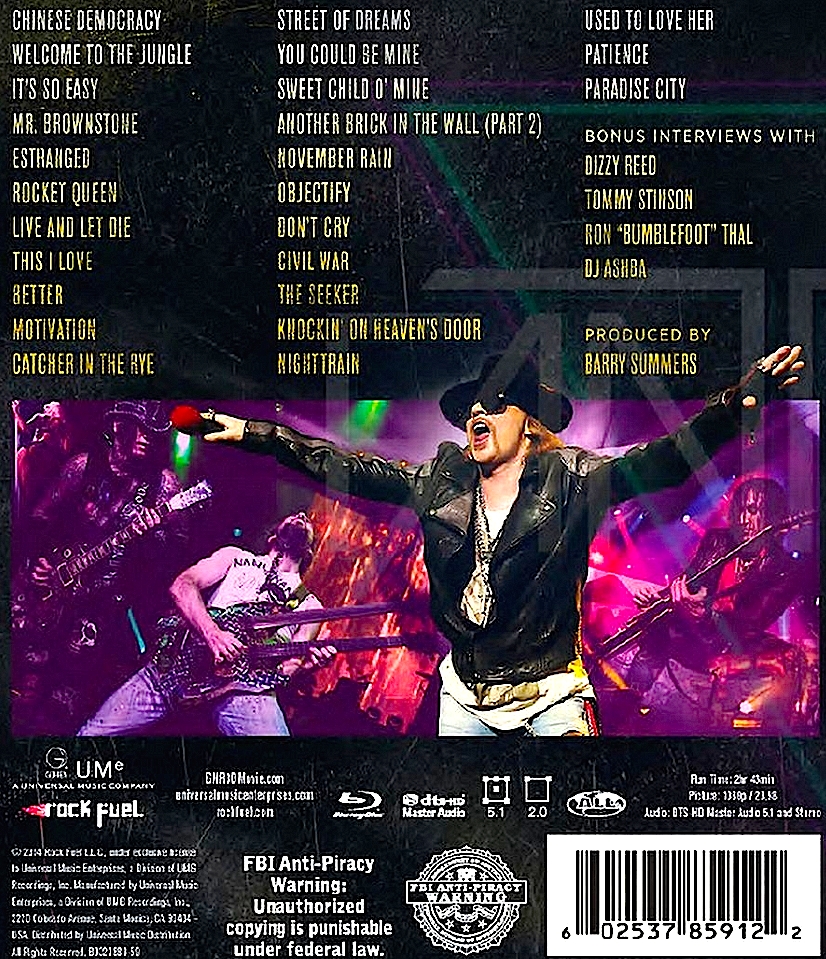 Say what you will about Axl Rose; this is a powerful concert experience that any fan of the band, old or new, will definitely want to see and hear for themselves. The concert itself runs nearly three hours in length, making this the longest consecutive concert I have ever seen on home video. That said, the band still does a good job of holding the attention of listeners and viewers throughout it all; no easy task given the lengthy duration!

The band does not skimp on the theatrics; the stage is customized for the performance, complete with elaborate setup and scantily clad dancing girls for the entertainment of the audience. The band is on fire here; even the aging Rose still sings surprisingly good (no, he does not sound exactly the same that he did two decades ago, but who does?) We get plenty of solos and other unexpected surprises that keep things fresh throughout. Guns N Roses is a band that demands not only good music but a visual aspect to their shows as well; you will be pleased to see that the band has pulled that off beautifully here!

The Blu-ray Disc features both 2D and 3D viewing modes, though I was only able to view the 2D version for the sake of this review. Picture quality is good overall on the disc, though parts do look a little murky, largely when the stage is bathed in blue light. The audio options get the job done; no major complaints on that end of things.

Bonus features include a photo slideshow gallery (strangely devoid of music) and interviews with four members of the band, detailing their musical pasts and how they came to be in the band over the years. It is a nice set of supplements and goes great with the concert.

If you are a Guns N Roses fan and want to see this incarnation of the band doing their thing live in an exciting setting, this is the perfect Blu-ray Disc for you. A solid performance from the band is supported beautifully by an elaborate, action-packed stage show that will never let your attention fade during its lengthy run time. Fans cannot go wrong here. Highly recommended!